US President Joe Biden prepares to sign a series of orders, including an order to strengthen the fight against Covid-19, in the Oval Office of the White House in Washington, DC, on January 20, 2021.
Jim Watson—AFP/Getty Images
By Alice Park

In its final report, the Biden Administration’s COVID-19 Health Equity Task Force highlighted encouraging improvements over the past year in addressing inequities in the burden of COVID-19 on racial and ethnic groups, as well as disparities in vaccine access and immunization rates.

Overall, the gaps in cases, hospitalizations and deaths between Blacks and Hispanics compared to whites have closed, with nearly 90% drops in COVID-19 deaths among Black, brown and indigenous populations over the past year. Vaccination rates have also improved, with these underrepresented groups now getting vaccinated at rates that reflect their makeup in the U.S. population. “Looking back to April, we were seeing around 10 points difference in terms of vaccination rates among racial and ethnic groups. Now we consistently see in national pools and from the CDC that for eligible adults in this country, the racial and ethnic gaps are gone for vaccination,” says Dr. Marcella Nunez-Smith, chair of the Health Equity Task Force.

Formed by an Executive Order President Biden signed in the first few days after taking office, the task force’s mission was to ensure that the COVID-19 response, including the historic mass vaccination campaign, prioritized equity—in education and information about the shots, as well as access to them.

That mission was particularly critical as the virus hit communities of color and lower resource areas the hardest: rates of infection, hospitalization and deaths were consistently higher among Black, Hispanic and non-white populations than they were among whites, for example. Because access to health care providers who were administering the vaccines is so unequal, those trends were expected to spill over into vaccination status if intentional efforts to balance the access weren’t made.

Through monthly meetings that stretched for three to four hours each, the task force’s 13 members gathered experts and reviewed data on a handful of major themes—the availability of relevant data on race and ethnicity, vaccine access, behavioral health, discrimination and xenophobia, Long COVID, testing, COVID-19 therapies and future pandemic preparedness. Ultimately, the group narrowed a list of 300 recommendations to 55 in their final report, centered around five major actions. These include investing in local community-based efforts, led by local leaders or organizations such as faith-based groups; putting more resources into collecting data on health-related concerns by race and ethnicity; and increasing representation of people of color in the health care system.

One of the main challenges the group faced in coming up with advice on addressing inequities was the lack of data on race and ethnicity in many national databases tracking COVID-19 cases and vaccination. “We were stymied—it’s not a secret that at multiple times in our work, we did not always have the data necessary to know where to target resources,” says Nunez-Smith. Highlighting this deficiency helped draw more resources over the past year to collecting and establishing data-gathering systems in communities of color, especially for the vaccination campaign. “The data infrastructure certainly improved throughout the pandemic, but at the beginning, we didn’t have what we needed,” she says.

President-elect Joe Biden, second from right, and Vice-President-elect Kamala Harris, left, listen as a video of Dr. Marcella Nunez-Smith, who has been selected to serve as the chair of Biden's Covid-19 equity task force, is displayed during an event at The Queen theater in Wilmington, Del., Tuesday, Dec. 8, 2020.
Susan Walsh—AP

Based on its recommendations, which the task force has been making public throughout its work over the past year, the Biden Administration is allocating $785 million from the American Rescue Plan to support community-based efforts to build confidence in vaccines among people of color and in rural areas and low-income populations, as well as bolster public health resources for people with disabilities. The funding will increase education and training for community health workers who focus on underserved communities, as well as school nurses and public health professionals in the Indian Health Service. It will also provide resources that help people with disabilities receive treatment for and recover from COVID-19.

Nunez-Smith says the task force’s work has already been an integral part of the Biden Administration’s COVID-19 response. For example, as the task force highlighted certain barriers to vaccination, such as the need to take time off work and lack of transportation to vaccination centers, the administration advocated for paid leave for people getting vaccinated, and covered transportation costs to vaccination centers. The government also supported local community and faith-based leaders to answer people’s questions about vaccines, based on the task force’s recommendation to provide vaccine education through trusted messengers.

Nunez-Smith stresses that the task force’s work doesn’t end with the report; one of the group’s recommendations is to maintain a health equity task force at the White House-level to sustain the momentum of prioritizing equity when considering any pandemic response. The intentionality of prioritizing equity during this pandemic response was largely due to the Executive Order that created the task force, and that level of commitment should carry over to the next response. “Was the task force any more important than the person who showed up to offer a ride to a neighbor to get vaccinated? No, we weren’t,” she says. “It took full collaboration with so many partners. Equity is a march and a journey, and this is not the end. There is still more work to be done, and one of our recommendations is for permanent coordination at the White House around the health equity agenda.” 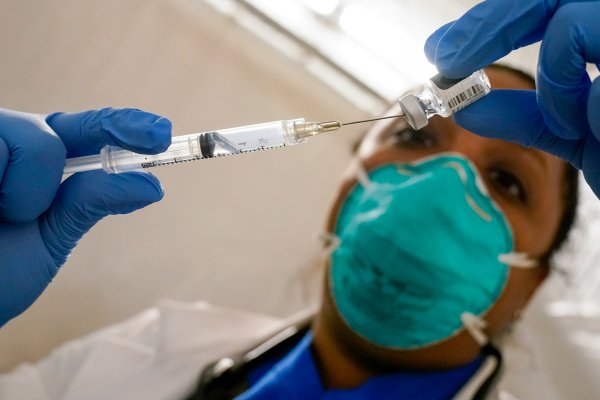 Pfizer Asks FDA to OK COVID-19 Booster Shots for All Adults
Next Up: Editor's Pick