Inside the Earnest Parties at the First Major NFT Conference

A nonfungible token collector, Seedphrase, the DJ for a set at VR World in Manhattan on Monday, Nov. 1, 2021. NFT.NYC, a gathering for NFT enthusiasts, offered a taste of a crypto-filled future.
Jeenah Moon—The New York Times/Redux
By Raisa Bruner

The Times Square Margaritaville is not the normal hangout of young tech millionaires and hip artists. But the shiny, tropical-themed tourist trap was the central hub and gateway to accessing this fall’s major NFT.NYC conference, a sprawling citywide event with dozens of panel discussions and hundreds of official and unofficial parties attended by over 5,000 eager cryptocurrency enthusiasts exploring the strange new world of NFTs, or non-fungible tokens, the blockchain-based assets—often art—that are rapidly growing into a multi-billion dollar industry.

Not that you would see 18-year-old star artist FEWOCiOUS at Margaritaville. Victor Langlois, who goes by FEWOCiOUS or Fewo for short, is one of the NFT world’s biggest success stories of the past year: he has sold millions of dollars worth of artworks as NFTs at auction. But on his second-ever visit to New York from his current home of Seattle, Langlois—who prefers paint-splattered clothing and splashes of bright eye makeup with streaks of golden highlighter swiped across his cheekbones—was primarily posted up in industrial Red Hook, Brooklyn, to host painting parties for his friends and collectors.

In an austere, high-ceilinged studio space near the waterfront, staff arranged 10-foot-tall canvases and buckets of paint on crafting tables. Langlois’s invited guests, many who seemed to know each other from chats on Twitter and Discord or previous crypto get-togethers, pulled on white hazmat suits and latex gloves, then scooped handfuls of paint and threw it—satisfyingly, cathartically—against the giant canvases. “I don’t think I’ve done this since I was, like, five years old,” one middle-aged man admitted. Age-wise, he was an outlier in the studio, as most of Langlois’ painting guests were late-20s to mid-30s crypto investors and fellow artists who happened to get in early as collectors of his works. Many have quit jobs or let primary careers sit idle while riding the tailwinds of the NFT and crypto boom of the past year. Early adopters of a new era of art, they seem quite content.

Read More: Teen Artists Are Making Millions on NFTs. How Are They Doing It?

These days, so is Langlois. “When I was like 12, I had a really bad time,” he explains as we walk around the canvases before his guests arrive, eyeing the bright colors and spray-painted symbols. “I wanted to die. My parents didn’t like each other. They go to work, and just got trapped in the cycle of a job. They didn’t have hobbies or anything. They had them when they were a kid; they used to make art, right? And they stopped. And I’d look at them and [think] — what’s life?” For Langlois, finding a way to express himself through his art changed everything.

“I had a moment earlier this year where I cried. I cried so much because I was like, I can’t believe I wanted to die.” NFTs were the ticket to something better, offering both financial freedom and a community of supportive peers who believed in his vision. “I like this weird fluorescent light and how it looks on your face. I like the light and shadows on the ceiling. I love cake. I love coffee. I love, like—imagine if you never tasted chocolate?”

His enthusiasm is infectious. When the collectors and artist friends show up, they hug him, timidly at first and then with joy. He mentions the other New York greats—Warhol, Basquiat—as precursors to this moment. They might also be precursors to what this eclectic group is doing here: building something at the intersection of craft and commerce. Andy Warhol’s Factory scene raised eyebrows at first for its commercialism, too. This version of today’s cultural capital goes one step further, dissolving the distinction between culture and capital entirely. It feels like playing, though.

Back in Times Square, the vibe is less free-for-all and more intense: a scrum of bearded engineers, sharp-eyed entrepreneurs and hoodie-wearing product managers. At the panels —”NFT Bubble? Use NFT’s 4 Altruism,” “Do You Want to Mint a CryptoNewYorker?,” “Metadata and Your Art”—a healthy buzz of chatter regularly threatened to overshadow the speakers on stage, except for the moments that industry superstars like Reddit’s Alexis Ohanian or Gary Vaynerchuk took up the mics.

But the real action, as the artists and in-the-know tech workers explained, happened well after the daytime panels anyway: at art openings, private dinners, surprise meet-ups and mega-parties hosted by popular companies and collectives: Origin Protocol, Metaversal, Consensys, OpenSea, OneOf, Bored Ape Yacht Club, Friends With Benefits, Artifex, SuperRare. For entry to some events, you’d need to have collected an NFT token via an online auction platform just to get in. For others, knowing the right person—someone on a groupchat with the founders of the crypto group hosting the event, for instance—would do. Or sometimes it was just about falling in with one of the many early-20s millionaires who are guiding this space into the future, many of them early crypto adopters who are investing heavily back into digital-native artists and NFT collections and are eager to keep the good times rolling.

In a world built on the concept of removing barriers to entry and building a more equalized market—for artists and investors alike—the invitation-only exclusivity can feel ironic. But more often than not, the parties were open season for anyone who found the location. (Despite the industry’s ample funding, however, the drinks rarely came free.) At each event, you could find loud music, digital art projections and ceaseless blockchain talk, as this disparate community finally congregated in the same rooms. The party itself, and the debauchery or lack thereof, was beside the point.

On Nov. 5, the conference’s final official evening, dozens of people lined up outside Hammerstein Ballroom in midtown Manhattan for access to a party billed as “Creature World” hosted by OpenSea, the biggest NFT trading platform currently online. (They facilitated over $10 billion in NFT trading volume in 2021 so far.) Inside, organized chaos: a giant adult bouncy house dominated the cavernous space, while a young DJ blasted music alongside a dancing mascot in a fuzzy blue costume, backgrounded by digital screens showcasing colorful NFT art.

In every corner, men in jeans and the occasional quirky hoodie, colorful hat or branded t-shirt shared blockchain-focused conversations. “What NFTs are you selling?” one pair asked. “What’s your role in crypto?” One 19-year-old college student from the Midwest, in New York as a representative of his school’s investment club, eagerly introduced himself. He explained that even though he’d recently been the victim of a “rug pull”—in crypto terms, when you invest in a coin and then the creator disappears, tanking the value and taking your investment with them—he was still all-in on the NFT world. He’d had a blast all week, networking and meeting artists. In the background, the DJ played Azealia Banks’s “212” at an eardrum-destroying decibel, and two masked people paraded a giant hot pink fabric worm through a sedate mosh pit near the stage. Nearby, another founder explained his work with a government entity to tie individual identities as NFTs to the blockchain in order to better trace immigration.

In the NFT world, the usual greeting is “GM,” shorthand for “Good morning.” (There’s nothing more to it than that: just positive vibes, simplified.) To close out the week, then, there had to be a “GN” party, for ”good night.” It was at a former bank, Capitale, now often used as a venue for charity galas or corporate events. In the queue milling outside, 15-year-old NFT artist Jasti, real name Jaiden Stipp, stood surrounded by a small crowd of well-wishers and his mom; the mother-son pair were visiting from the Pacific Northwest. His hair was a mix of hot pink and cotton candy blue.

Inside the venue, displays showed off the work of over 25 different artists—tall digital billboards of cult-favorite CryptoPunks, Sarah Meyohas’s blockchain-native photography “Speculations”—and a DJ named Claude VonStroke reigned over a crowded dance floor. It was nearly midnight, and time for Stipp to go home: more painting parties to come, after a successful few weeks in which he had sold about $350,000 worth of his digital art through Nifty Gateway and time spent creating collaborative works with FEWOCiOUS and a diverse gang of other young NFT artists riding this wave. He was upbeat; it was fun to finally see people he only knew as their online avatars, he said. Plus, everyone was so supportive. And why not? The party was just getting started. 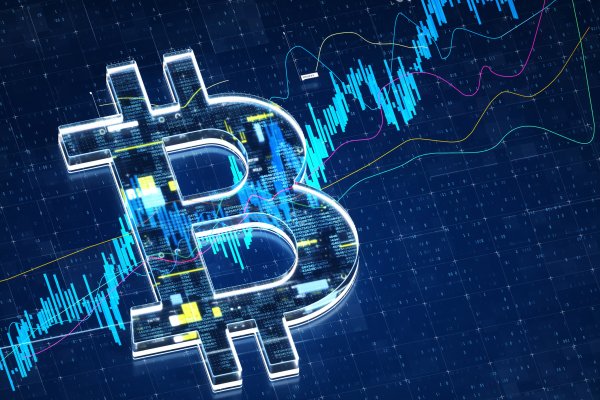 The World’s Cryptocurrency Is Now Worth More Than $3 Trillion
Next Up: Editor's Pick