Buffalo Bill is onstage engaged in fierce battle. He and his scouts are fighting a ferocious group of Cheyenne warriors. The audience holds its breath as the terrifying Cheyenne appear to be gaining the upper hand. But just when it seems all hope is lost, Buffalo Bill—dressed in an elegant black velvet, lace-trimmed, Mexican vaquero suit—takes aim at the Cheyenne war chief Yellow Hand and fires. Their chief shot dead, the Cheyenne are defeated. Buffalo Bill walks over to Yellow Hand’s lifeless body, takes out his knife, and removes Yellow Hand’s scalp. Buffalo Bill triumphantly raises the scalp in the air. “For Custer!” he declares. The audience erupts into wild applause and cheers. “For Custer!” they cry. In Buffalo Bill’s stage show The Red Right Hand or The First Scalp for Custer, the scalping of Yellow Hand was an act of justice.

The story of Buffalo Bill’s scalping of Yellow Hand would become a part of a mythology—a story that William F. Cody largely invented, just as he had invented his own legend and the “Wild West.”

Cody was given the name Buffalo Bill for his talent in slaughtering buffalo. At first, Cody hunted buffalo for food. Buffalo were plentiful around the country, and hunting them was a popular sport, but Cody was obscenely prolific in killing—claiming to have shot dead 4,280 buffalo in just 18 months. He got a job with the railroad companies to kill buffalo in order to feed railroad workers. But quickly, the work became about more than killing buffalo; it became a part of killing Indians.

As American colonizers looked to expand their territory westward with the building of railroads in the mid- to late 19th century, they came into direct conflict with the Native people who had lived on those lands for centuries. Prime railroad territory was often prime grazing territory, and valuable resources like gold were found in places where the Sioux hunted. The U.S. government had declared de facto total war against Native people wherever they stood between the United States and its expansion west. The United States attacked Native people in every way it could—fighting combatants on the battlefield, killing women and children in their homes, spreading disease, forcing relocation—nothing was off limits. But still, Native communities fought to maintain their lands, and fought well.

In 1869, facing a protracted battle with Native tribes like the Sioux, President Ulysses S. Grant appointed Phillip Sheridan as commanding general of the army and asked him to help solve the “Indian Problem” once and for all. Sheridan reached out to William Tecumseh Sherman, who had distinguished himself with his scorched-earth battle tactics during the Civil War, for advice. Sherman observed that wherever buffalo existed, there would be Native people, and they would continue to fight for land wherever the buffalo roamed. Sherman’s advice to Sheridan was simple: remove the buffalo in order to remove the Indian.

Cody had gained a reputation as a skilled hunter, and he went to work for Sheridan, killing as many buffalo as he could. Men from all over the country boarded trains headed west in order to shoot buffalo with .50-caliber rifles from train windows. They killed thousands of buffalo a day, leaving the animals’ lifeless bodies where they fell on the plains to rot. Wealthy and powerful men from the East Coast and even Europe rode west to join in on the fun, guided by “Buffalo Bill” Cody.

As journalists traveled with the wealthy men to document the hunts for newspapers across the country, Cody saw his first real opportunity for fame. He began partnering with the authors of dime-store novels and started commissioning plays about his exploits. Soon, Cody was regularly traveling back and forth—east to star in stage shows, and then back west to continue the wholesale slaughter of buffalo.

As famous hunters like Cody popularized buffalo hunting and countless men joined in the killing, they found that they had to travel farther west in search of buffalo as numbers dwindled. The excitement following the widespread slaughter of buffalo began to wane. Cody, now having tasted celebrity, went in search of greater fame and found it in battle. An experienced scout with the U.S. Army, he signed on to join in the Plains Wars in 1876, announcing from the stage of one of his shows that he was leaving “play acting” in search of the “real thing.” He packed his costume and went off to war.

Opportunity struck a little over a month after Cody joined the 5th Cavalry in southern Wyoming. A small band of Cheyenne warriors had been spotted heading west in pursuit of two U.S. military couriers. Cody gained permission from his superiors to take a small group of fighters to engage the warriors. Before leaving, Cody changed out of the typical sturdy, rough clothing that the rest of the cavalry wore and into his costume. Dressed in black velvet pants and a red silk shirt trimmed with silver buttons, Cody rode out to meet fame and fortune. The fight itself was unextraordinary, lasting only a few minutes. But after Cody killed Cheyenne warrior Hay-o-wei, whose name means “Yellow Hair,” Cody scalped the dead warrior and took his warbonnet and weapons as trophies. According to Cody, he thrust the scalp in the air and shouted, “The first scalp for Custer!” Nobody else at the skirmish remembered him doing that. None of the warriors that the men fought had been at the battle of Little Big Horn, known as Custer’s Last Stand, or had likely ever encountered the revered General George Armstrong Custer. Within a week of his killing Yellow Hair, exaggerated stories of Cody’s bravery under fire began to reach the newspapers.

A few months after killing Yellow Hair, Cody left the cavalry to return to the stage. Each night, he donned the very outfit that he wore in battle to reenact a wildly dramatized version of the killing of Yellow Hair, now renamed by Cody as Yellow Hand and promoted to the position of chief, instead of simple warrior. While papers denounced the blatant glorification of violence, audiences packed the theater to see Cody wave the scalp of Yellow Hand in the air in victory.

Cody would go on to develop more stage productions showcasing the violent masculinity of the West to great success, leading to the 1883 debut of his most famous show, Buffalo Bill’s Wild West and Congress of Rough Riders of the World.

The timing of Cody’s Wild West was perfect. In the mid-19th century, white men in England and the United States began to worry about their young men who had it too easy; their wealth and comfort had made them soft. In the United States, a country still fighting to retain the land it had stolen from Native people, this softness could threaten the expansion of America across the continent. The call for white men of America to maintain physical power was not just political; it was a spiritual calling.

Cody’s Wild West show offered everything that white men in search of power and glory were looking for. In the show, white men were noble and brave. They fearlessly tamed animals and fought savages. “Indians,” even when Cody allowed them to be something less than mindless killing machines, were seen as great relics of the past, conquered by the superiority of white men. The lure of Western adventure did not dissipate as these boys became men. Instead, they set out to star in their own stories of physical dominance.

Cody expanded his show from a small stage to an extravaganza the size of a small town. He hired real Native warriors to play Native warriors. Gunslingers and cowboys would join the show. Eventually he would add “Zulu warriors,” Mexican “vaqueros,” Turks, and dozens of other “exotic” performances. Buffalo Bill’s Wild West became the most popular show in America, and he became one of the wealthiest and most famous entertainers in the world. Buffalo Bill Cody, Wild Bill Hickok, and many other dimestore-novel heroes would inspire an entire generation of young white men to head west in search of their own Manifest Destiny.

With the Wild West show gaining in popularity, Cody also strove to increase its respectability. Buffalo Bill’s Wild West was not a “show”—it was, according to Cody, an educational event. It was a living history. People would come to Wild West to learn as much as to be entertained. Few questioned the supposed educational value or legitimacy of his project. And the racist, exaggerated stories of white male American bravery, leadership, and righteous victory became a part of our collective understanding of American history; these misleading legends persist to this day.

After decades of success, Wild West was eventually done in by financial mismanagement, Cody’s drinking habits, and the rising popularity of movie theaters. Cody died on Jan.y 10, 1917, at age 70. He is still remembered as an icon of the American West: a soldier, a showman, a wildlife conservationist, and a friend of the Indian. He deliberately cultivated that reputation. As Cody interacted with the Native people who worked in his show, he became less comfortable with the scalping act that had launched his career. The scalp and warbonnet of Yellow Hair were removed from their stage-side case, never to be displayed again.

Cody would eventually speak against the scalping of Native people. He would also come to regret the massacre of buffalo that had given him his stage name. While the great buffalo hunt featuring live bison would always be a prominent part of Cody’s show, he began to speak out against the buffalo hunting that he had popularized. Perhaps one of the most brutal of white male privileges is the opportunity to live long enough to regret the carnage you have brought upon others.

Adapted from MEDIOCRE: The Dangerous Legacy of White Male America by Ijeoma Oluo, now published in paperback by Seal Press, an imprint of Hachette Book Group. Copyright © 2021 by Ijeoma Oluo. 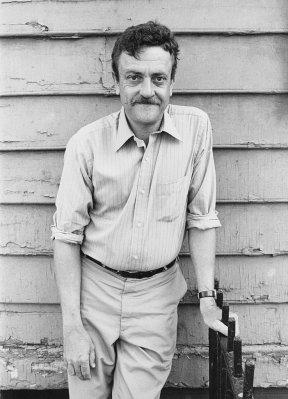 What Early Drafts of Slaughterhouse-Five Reveal About Kurt Vonnegut's Struggles
Next Up: Editor's Pick