(SILVER SPRING, Md.) — Peloton suffered its worst day as a publicly traded company Friday after telling investors that it will likely lose more money than it had expected in fiscal 2022.

Peloton thrived during the pandemic, recording its first and only profitable quarters with Americans unable to hit the gym, instead setting up places to work out at home. Sales of its high-end bikes and treadmills soared, as did subscriptions for its online, interactive classes.

Those sky-high sales have stalled, however, since the rollout of COVID-19 vaccines. Gyms have re-opened, with some restrictions, and people are beginning to spend money on other things, like travel and restaurants.

Late Thursday, the New York City company said that it expects those lucrative subscriptions to drop 6% and losses in 2022 of between $425 million and $475 million. That’s a lot more red ink than its previous guidance of $325 million in losses.

Peloton has other problems. It’s wrestling with the same snarled global supply chains that have plagued manufacturers this year as economies reopen. What’s more, gyms that had closed during the pandemic began offering their own virtual classes, further encroaching on one of the company’s greatest strengths.

It is also recovering from a recall of its treadmill machine, something it had fought, after it was linked to a death of a child and numerous injuries.

“Given the unprecedented circumstances presented by the global pandemic, we said last quarter that modeling the exit from COVID and the massive growth we saw in fiscal 2021 would be a challenging task, and that has certainly proven to be true,” CEO John Foley told investors on a conference call.

Peloton’s early success also brought new competition, companies that offered cheaper bicycles and exercise equipment. In August, the company cut the price of its Peloton Bike — its marquee technology — to $1,495 from $1,895.

Read More: The Pandemic Has Spurred a Return to Low-Cost Fitness Activities

Industry analysts were quick to cut expectations for the company Friday, with one citing “rapid deterioration” in Peloton’s guidance for next year.

Scott Devitt of Stifel said he had believed Peloton would continue to grow even with the worst of the pandemic seemingly in the rearview mirror. He is recalibrating that opinion.

“Now, given the materially lower expectations, we expect it will take several quarters to determine a more normalized pace of growth, or more skeptically, whether or not the revised outlook is an indication that the core product may be closer to maturity in existing markets than previously thought,” Devitt wrote to clients.

Peloton reported sales of $805 million for the first quarter of fiscal 2022, close to most Wall Street targets. But Wall Street focused on what’s to come. The company lowered its sales expectations to a range of $4.4 billion to $4.8 billion in 2022, well below the $5.3 billion analysts had forecast. 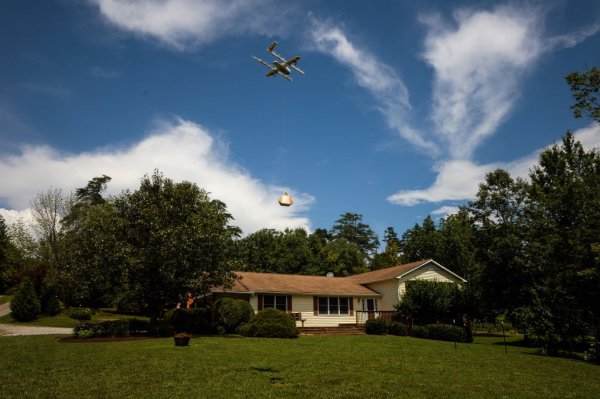 Whatever Happened to Amazon's Drone Delivery Service?
Next Up: Editor's Pick