If You're Feeling Anxious, Try This 2,000-Year-Old, Neuroscience-Backed Hack

Some 2,000 years ago, in the throes of a targeted chase to his death, a Roman philosopher named Seneca had a thought: “what’s the worst that can happen?”

Today, a growing body of research finds that a Seneca-inspired exercise—inviting the worried brain to literally envision its worst fears realized—is one of the most evidence-based treatments for anxiety. In scientific terms, that exercise is called imaginal exposure, or “facing the thing you’re most afraid of” by summoning it in your mind, says Dr. Regine Galanti, the founder of Long Island Behavioral Psychology, and a licensed clinical psychologist who regularly integrates imaginal exposure into her therapy.

As a subset of cognitive behavioral therapy (CBT), imaginal exposure relies on simple logic. Just as anxiety is created in your head, it can also be squashed in your head. And even though the most effective anxiety treatment is administered by a mental health professional over a long period of time, a growing brigade of psychologists are finding ways to help people do imaginal exposure in their own homes, on their own terms.

Two thousand years before imaginal exposure would be proven one of science’s strongest anxiety treatments, dozens of Greek and Roman philosophers had the same intuition about the theoretical value of putting worry in perspective.

In a letter to his friend Lucilius, around 64 A.D., Seneca wrote: “There are more things likely to frighten us than there are to crush us. We suffer more often in imagination than in reality. What I advise you to do is, not to be unhappy before the crisis comes, since it may be that the dangers before which you paled as if they were threatening you, will never come upon you.”

Dr. Marc Antoine Crocq, a psychiatrist at Centre Hospitalier Universitaire in eastern France, says that worldview had to do with their religious beliefs.

“They believed in a god (Zeus or Jupiter) who was rather distant and not interested in the daily life of humans,” says Crocq, who has researched the topic. “So they tried to understand the world and human functioning with a more materialist scientific approach.”

The philosophers’ conclusion, Crocq says, was that “pathological anxiety is a mental representation”—and therefore, something that humans can address themselves.

Dr. Stefan Hofmann, a professor of psychology and director of the Psychotherapy & Emotion Research Laboratory at Boston University, has proven this empirically and, like Crocq, has studied the theory’s deep historical roots. He references the ancient Greek philosopher, Epictetus, who wrote: “Men are not moved by things, but the view they take of them.”

As Hofmann explains, “The idea [behind that quote] is that we are always engaging with our environment to make sense of it, and so it really matters how we perceive things. Anxiety itself is a healthy, adaptive response to an environmental threat, but sometimes, those perceptions are maladaptive, if they’re not actually putting you in danger.” He points to the way people commonly fear spiders or snakes, or even social situations. “Sometimes we respond with emotional distress in situations where it doesn’t make sense to feel emotional distress.”

Correcting those maladaptive perceptions, Hofmann says, is at the heart of CBT, a practice he describes as “toning down the intensity of the emotional states” that follow anxiety, in order to feel better. When Dr. Aaron Beck, who died last week, coined the approach in the 1960s, he was interested in helping people recognize how their thoughts were often separate from reality.

And though each therapist may differ in precisely how they administer CBT, the elements of imaginal exposure—confronting the source of anxiety-provoking thoughts, and developing healthier thought patterns around them—is a common entry point.

In the decades since, CBT has consistently been considered one of the most effective practices to manage anxiety in the long term. Hofmann conducted one of the most widely cited literature reviews on its efficacy. And imaginal exposure, the small Seneca-inspired slice of CBT, is associated with a wide spectrum of mental health gains, including reduced worry and negative emotion, improved symptoms of depression and post-traumatic stress disorder and increased ability to engage in the once-feared activity

Still, not all people have access to professionally-administered cognitive therapy. One study of 2,300 psychotherapists in the U.S. found that only 69% use CBT when treating anxiety and depression. And then there’s the problem of access: one Census Bureau survey indicates that more than one-third of Americans live in areas lacking mental health professionals. The problem has worsened over the past year. Just as the pandemic triggered unprecedented rates of anxiety, it also led to a shortage of therapists available to treat it. But even without professional supervision, psychologist Dr. Regine Galanti says there are simple CBT-informed techniques anyone can integrate on their own.

Before encouraging people to actively confront their worry, Galanti starts with a simple question: why is it there in the first place?

After identifying the cause of someone’s fear, Galanti focuses on validating the emotion—not diminishing it or reassuring the patient. “We think naturally when someone’s anxious to say, ‘Oh, don’t worry, it’s gonna be okay,’ but anxiety is not logical,” she says. “Often when we feel anxiety coming on, we do everything we can to get away from it, but we’re rarely successful, since we don’t follow it through to its logical conclusion. So these little worries just pile up, and you never actually give it the time and space to see what happens when it is there.”

Take, for example, the patient afraid of dogs. Galanti did something that perhaps seemed counterintuitive: inviting the woman to spend time with a dog, so she could face the fear head on. That worked well, Galanti says, but what about when people’s fears—like the death of a loved one—aren’t as plainly testable? “It’s about learning to handle uncertainty that we don’t know what’s going to happen,” she says. “But how can we orient ourselves to the present to say it’s not happening now?”

That advice was particularly apt during the early days of the pandemic, when uncertainty skyrocketed. At the time, Galanti advised people to set aside 15 minutes of worry time for themselves.

“Anxious thoughts tend to take over your thinking, and it ends up being a game of whack-a-mole—when you knock one down, another pops up,” she says. “So this strategy focuses on not postponing your worries, [instead] setting up a time where you can worry all you want.”

Through this strategy, Galanti encourages people to jot down whatever is causing them anxiety, and then to pick a dedicated time—ideally not before bed—to revisit those concerns. “The reason why this works is that it sets boundaries, so when a worry comes up at 9 a.m., you can say, ‘Hey, not now, your time is coming.’”

She says people rarely use the full 15-minutes of allotted worry time, but it helps put anxiety into perspective. ”Sometimes when you hit your worry list, you might find that the thing that bugged you at 9 a.m. that you thought would be the end of the world is actually not bugging you anymore at all.” 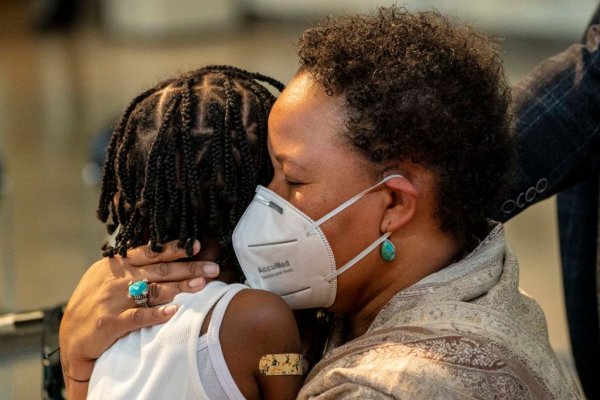 As Pediatric COVID-19 Vaccines Roll Out, Parents Celebrate
Next Up: Editor's Pick