A cooling tower at the Tihange nuclear power station in Huy, Belgium, on Oct. 26, 2021. Belgium has elected to phase out nuclear power by 2025.
Thierry Monasse—Bloomberg/Getty Images
By Alejandro de la Garza

In the midst of the COP26 climate talks yesterday, U.S. and Romanian officials stepped aside for a session in the conference’s Blue Zone, establishing an agreement for U.S. company NuScale to build a new kind of modular nuclear power plant in the southeastern European country. The company’s plants—designed to be quickly scaled up or down based on need—are intended to be quicker and cheaper to build than the traditional kind, with some considering them to be a promising alternative for countries seeking to wean themselves off fossil fuels.

NuScale CEO John Hopkins sees the agreement as part of a broader recognition that nuclear power has a big role to play as the world decarbonizes. “I’ve seen a significant shift here,” Hopkins said, speaking to TIME from Glasgow yesterday. “It used to be the only thing really discussed was renewables, but I think people are starting to be a little more pragmatic and understand that nuclear needs to be in the mix.”

But others at COP26 aren’t convinced that NuScale’s small reactors can help avoid climate catastrophe. Some point to the fact that NuScale has yet to build a single commercial plant as evidence that the company is already too late to the party. “We have to get everything done in the next 25 years,” says Tom Burke, co-founder of climate think tank E3G. “The idea that you’re going to scale up a technology you don’t even have yet, and it’s going to be commercially viable [in that time], just seems to me like la la land.”

More broadly, the NuScale controversy underscores larger disagreements about nuclear power’s role in bringing the world to a post-carbon future. On one side, institutions like the International Energy Agency say that the nuclear industry, which has been shrinking for years, will need to nearly double in size over the next two decades in order for the world to meet net-zero emissions targets. Meanwhile, the U.S. has embraced the power source as a solution for developing countries, announcing yesterday that it will spend $25 million to help build reactors in Kenya, Brazil and Indonesia. Russia’s environment minister told Reuters last month that the country planned to push for other nations at COP26 to acknowledge its nuclear power plants as environmentally friendly, while the Czech Republic, France and a slew of other European nations announced an “alliance” to promote nuclear energy (as well as natural gas) as sustainable investments under the E.U.’s upcoming climate finance rules.

But opposition to the idea of including nuclear power in a green energy roadmap is equally fierce. Germany and Belgium have long been drawing down their nuclear sectors, while nations like New Zealand and Austria have opposed classifying nuclear as a clean power source alongside renewables like wind and solar. Lukas Ross, Climate and Energy Justice Program Manager at Friends of the Earth U.S., points to ballooning costs for nuclear projects in the U.S. and the U.K., and calls the energy source a “distraction” and a waste of scarce resources compared with renewables like wind and solar. “[Nuclear] is too expensive and too slow to be relevant to the climate crisis,” says Ross.

Still, Sergey Paltsev, deputy director of the MIT Joint Program on the Science and Policy of Global Change and a senior research scientist at the MIT Energy Initiative, says the economics of nuclear energy are improving thanks to new technology like NuScale’s modular reactors, and that fission energy can help the world’s electricity systems meet crucial “baseload” needs, providing a steady current of power even when the sun doesn’t shine and the wind doesn’t blow. But other experts say that the whole notion of baseload power is an outmoded concept, predicated on old assumptions about the ways that grids work. And Paltsev admits that, despite nuclear’s apparent promise, the industry still must prove that the technology is safe and cost effective.

“I wouldn’t say that it’s a rosy picture for nuclear,” Paltsev says. “But at the same time I think it should be taken seriously.” 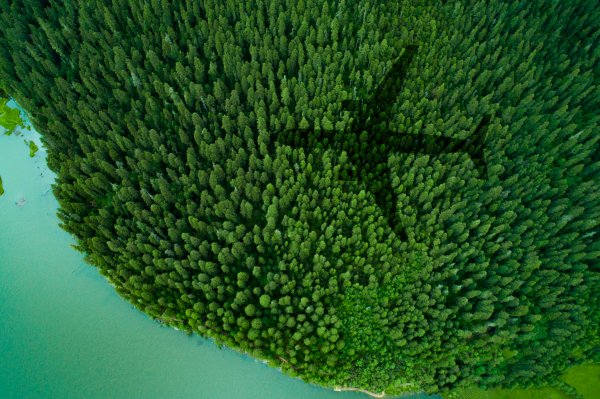 The World's Top Carbon Emitters Now All Have Net Zero Pledges. Most of Them Are Too Vague
Next Up: Editor's Pick