Why Schools Are Offering Money, and More, to Get Kids Vaccinated

In Anderson, S.C., high school students received $100 if they got vaccinated against COVID-19. In Phoenix, school leaders are giving out $100 gift cards. In Los Angeles, students have the chance to win gift cards or free prom and homecoming tickets if they get the jab.

And in the nation’s largest school district, New York City, children as young as 5 could get paid for getting a COVID-19 vaccination, another example of the lengths to which schools are going as they strive for normalcy after nearly two years of pandemic-disrupted education.

Like everything involving schools during the pandemic, from mask mandates to remote learning, the decision to reward kids with money or gifts to do something that most health experts recommend is not without controversy; some critics say it amounts to bribery. But for school districts across the country, if it keeps students and staff safe, it makes sense.

“Our youth go home every day to their families, to multigenerational households, to grocery stores, to churches, to parks. There’s no way to separate public education from public health,” says Chad Gestson, superintendent of Phoenix Union High School District in Phoenix. “We know that the higher the vaccination rate, the lower the spread, the minimized quarantines and the increased access to campus. That’s been our focus.”

Gestson’s district is offering students a $100 Target gift card if they show proof of vaccination, working toward a goal of getting 85% of students and staff in the district fully vaccinated. He says roughly 10,000 students—about 36% of the district—are fully vaccinated so far. And 83% of school staff are now vaccinated, after the district offered a $200 vaccine incentive for employees.

“I looked at it more as a safe-school issue than anything else,” Wilson says. “This is tested. A lot of people smarter than us have worked hard on this. So to me, it was money well spent.”

Both Wilson and Gestson used federal coronavirus relief funding to pay for the incentives in their districts.

The ‘safest thing we could do’

Wilson had considered expanding the program to younger students but decided against it after facing backlash from some parents and other protesters, who argued that the policy amounted to coercion and who accused the district of overstepping.

“Throughout history, schools have been involved in [vaccinations],” Wilson says, recalling that he got the polio vaccine at school as an elementary-school student. “Our number-one goal is to provide a safe learning environment, and to me, I think this was the safest thing we could do to ensure our kids were safe — to do everything in our power to ensure they didn’t get COVID.”

On Nov. 2, the Centers for Disease Control and Prevention (CDC) recommended the Pfizer-BioNTech COVID-19 vaccine for children ages 5 to 11, following the Food and Drug Administration’s authorization of the vaccine for that age group. But youth vaccination rates have been lagging. While children as young as 12 became eligible for the Pfizer vaccine in May, just 50% of 12- to 17-year-olds in the U.S. are fully vaccinated against COVID-19 — a smaller percentage than any older age group, according to a Mayo Clinic tracker.

New York City announced Thursday that children ages 5 to 11 would get $100 if they got vaccinated against COVID-19 at a city-run or school vaccination site, expanding the incentive that was offered to adults in July.

In Los Angeles, the nation’s second-largest school district is requiring students 12 and older to be vaccinated by Jan. 10 if they want to continue attending in-person classes. Frances Baez, superintendent of the city’s Local District Central, has been making phone calls and home visits to ensure as many students as possible meet that deadline. About half of the students ages 12 and up in her district have been vaccinated so far.

On Friday, she plans to be door-knocking around the community to spread the word about a vaccination clinic taking place at one of the district’s schools on Monday. When she encounters parents who are hesitant to vaccinate their children, she has emphasized the learning loss she witnessed last year and the progress she sees students making since returning to classrooms this fall. Los Angeles students who don’t get vaccinated by January will have to participate in an online learning option, and that worries her.

“If we go the direction of online learning, we’re going to fall back again,” Baez says. “There’s going to be a decline. So I’m using the data to establish the urgency, the importance that face-to-face learning is the best option that helps our students succeed.”

For Gestson, the gift card incentive was a logical first step in a district that wasn’t ready to mandate vaccines for all students. “We weren’t—and aren’t—quite ready yet to move into the requirement phase,” he says. “We wanted to move from encourage to incentivize, and then perhaps at some point, from incentivize to require.”

The school-based efforts mirror incentive programs launched by states, companies and colleges. Some colleges have required students to be vaccinated, while others offered students the chance to win gift cards or a year of free tuition if they did so.

But research on the effectiveness of such incentives is mixed. At least one study by the Center for Health Incentives and Behavioral Economics found that statewide incentive programs did not affect daily vaccination rates. But researchers found that a North Carolina program offering $25 to adults who got vaccinated encouraged more adults to get the jab, as vaccination rates declined more significantly at clinics not offering the incentive.

Emily Largent, an assistant professor of medical ethics and health policy at the University of Pennsylvania’s Perelman School of Medicine, says “small, guaranteed incentives” tend to work better than big prizes that aren’t guaranteed, like lotteries. She notes that $100 is unlikely to sway someone who is opposed to vaccines, but it could help ease logistical barriers to vaccination, including transportation costs or time off from work.

“To the extent that offering that small cash incentive helps overcome those barriers, it can be really helpful for getting people who are open to being vaccinated across the line and removing barriers that are in their path,” Largent says.

In a piece published in the Journal of the American Medical Association in January, Largent analyzed the problems with paying people to be vaccinated against COVID-19 and concluded that such a policy “should be adopted only as a last resort if voluntary vaccine uptake proves insufficient to promote herd immunity within a reasonable period of time.”

But a lot has changed since then. “Uptake has really slowed down,” she says. “I think kids are going to be such an important part of trying to help increase overall community vaccination rates, given what a large percentage of the population they are, and it’s appropriate to be thinking about this.”

“I’m an ethicist. I like when people do things for the right reasons. I think protecting yourself and your community is a really great reason to be vaccinated,” Largent says. “But I’m an ethicist who lives in the real world, and we know that people have financial barriers. Sometimes they’re hesitant. They have concerns, and we should meet people where they’re at. Financial incentives can be part of this multi-pronged approach.”

Wilson says he would recommend the incentive program to other school districts looking to boost vaccination rates, but he warns that it won’t come without controversy.

“You better set your jaw and have alligator skin because they’re gonna come after you,” he says, referring to protesters opposed to vaccines. “But you’ve just got to stand your ground and know we’re doing whatever we can to take care of students and children in these schools.” 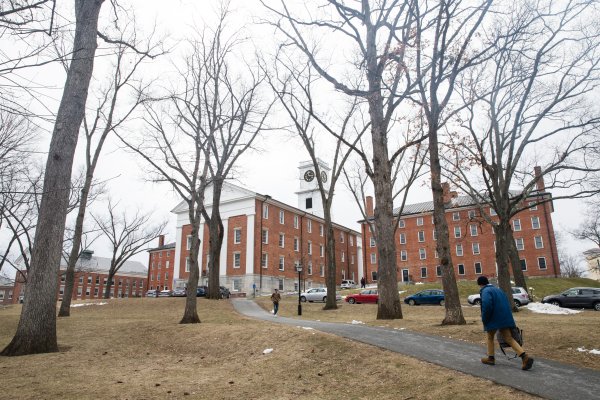 Inside Amherst College's Decision to End Legacy Admissions
Next Up: Editor's Pick