Undocumented Immigrants Are Now Mostly Protected From Arrest at Homeless Shelters, Playgrounds and Vaccination Sites. But It's Still Hard to Feel Safe

The Biden Administration has dramatically expanded an existing federal list of areas where immigration officials are prohibited from making arrests.

Migrant advocates applauded the changes, but stopped short of popping the champagne. The Biden Administration, while reversing many Trump-era policies directed at immigrant communities already living in the U.S., has simultaneously pursued a hardline approach to enforcement at the U.S.-Mexico border. Biden’s DHS has embraced the Trump Administration’s unprecedented use of Title 42, a health measure that allows federal officials to immediately expel immigrants at the border, without abiding by the normal trappings of immigration law—a move that has helped fuel a record-breaking number of migrant arrests at the U.S.-Mexico border during fiscal year 2021.

The Biden Administration’s apparently contradictory approach to immigration enforcement has left undocumented immigrants and migrant advocates reeling. Many say they are distrustful of the recent changes, while others are simply bracing for new changes under the next presidential administration, or the administration after that.

“It’s wide open enforcement, and then Obama narrows it, and then Trump rescinds that, and then Biden narrows it again,” says Randy Capps, director of research for U.S. programs at the Migration Policy Institute (MPI), comparing U.S. immigration enforcement to a ping pong or tennis match. “Migrants arriving the border, or immigrants in the U.S. who could be deportable are right to be worried that anything that they do now could count against them in the future.”

Julio Calderon, a 32-year-old undocumented immigrant who has lived in the U.S. for 16 years, told TIME that while he welcomes the Biden Administration’s expansion of protected areas, the move hardly makes him feel safe. “It’s important to not be afraid of going to pick up the kids from school,” he says. “But then what about on the way home?”

“Our lives stay in that same limbo, on that same roller coaster of emotions,” he adds, explaining that the next administration can “come and take it away.”

The actual letter of U.S. immigration law has remained mostly static for decades. It only appears to shift dramatically between Administrations because each President, joined by their DHS Secretary, has extraordinary power to determine how the existing laws are enforced.

Each administration issues its own guidelines directing Immigration and Customs Enforcement (ICE) and Customs and Border Protection (CBP) officials to prioritize certain classes of immigrants for arrest and deportation—and to offer other classes special treatment. Both the Obama and Bush Administrations, for example, directed DHS employees to prioritize the deportation of certain criminal groups, while outlining other factors, like old age and U.S. military service, that might mitigate enforcement.

President Trump rescinded previous administrations’ directions, and former DHS Secretary John Kelly replaced them with new guidance so broad that officials were effectively instructed to “prioritize” the deportation of all undocumented immigrants.

The Biden Administration’s two-faced approach to immigration enforcement — humane enforcement guidelines within the U.S., and aggressive enforcement at the border — marks something of a return to the Obama-era strategy, Capps says.

On Sept. 30, the Biden Administration issued guidance on enforcement priorities, focusing on undocumented immigrants with criminal convictions. Biden’s guidance was similar to Obama’s, but differed in that it gives ICE and CBP officials more leeway to take “into account the totality of the facts and circumstances,” per a DHS statement, when conducting an arrest. Immigration officers are now encouraged to consider an array of other factors, like how long a person has been in the U.S., if they are a parent of U.S. citizen child, if they are they a business owner, or how long ago their crime was committed. Those other “factors have an equal or even greater value in some cases,” Capps says.

The Biden Administration has also gone farther than the Obama Administration in attempting to offer protections to undocumented immigrants in the U.S. For example, while both Obama and Biden halted workplace immigration raids, Biden’s DHS announced it would also implement systems to protect undocumented workers willing to report “unscrupulous employers.” And while Obama (and other prior administrations) designated locations where enforcement shouldn’t take place, Biden has now significantly expanded that list.

Calderon, who has been involved with several immigrant advocacy organizations in his home state of Florida, says the Biden Administration’s policy shifts have been a source of familial debate. No one is quite sure, he says, whether Biden’s unwinding of most of Trump’s hardline policies will make a real difference in their lives or whether recent changes to enforcement will truly protect them from deportation.

Calderon is the most vulnerable member of his immediate family. His siblings are either U.S. citizens or are protected from deportation through Deferred Action for Childhood Arrivals (DACA), and his parents are protected through Temporary Protected Status for Hondurans. They remain hopeful about the Biden Administration’s shift, he says, while he is skeptical.

“The expectations we had from this administration were completely different than what we’re seeing, and that is the problem,” Calderon says. “There is a there’s a big difference [between Trump and Biden], I cannot deny that…Having President Biden has given us kind of like a break. But we need more than a break.”

Read more: The Democrats’ Bill Could Change the Lives of More Than 7 Million Undocumented Immigrants

Angelica Salas, executive director of the Coalition for Humane Immigrant Rights (CHIRLA) in Los Angeles, says ultimately the recent changes are good news and welcome, but counsels a dose of “healthy skepticism.” “All of these policies that have been put into place are trying to put bandaids on an incredibly gouging wound in our community,” she says. “These policies have to also come with an incredible level of enforcement and follow-through and monitoring.” 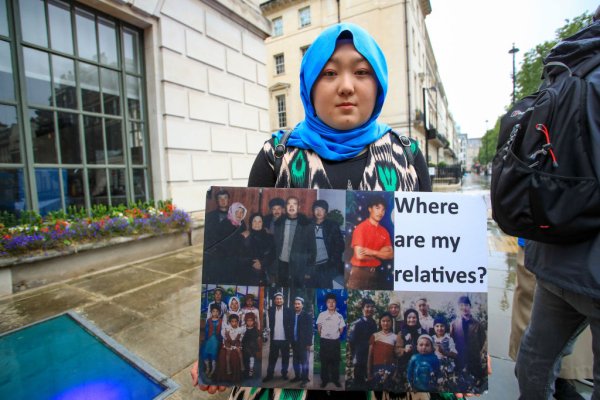 Why the US Took Zero Uyghur Refugees in 2021
Next Up: Editor's Pick