Chinese military missile forces march on the 70th anniversary of the the People's Republic of China founding in Beijing, Oct. 1, 2019.
Shen Shi—Imaginechina/Reuters
By W.J. Hennigan

China is expected to expand its nuclear weapons stockpile faster and more aggressively than previously expected, according to a new U.S. military assessment, underscoring the growing strategic threat that Beijing poses as it continues to build its military power.

A Department of Defense report on Chinese military power released Wednesday says China is expected to have 700 operational warheads by 2027 and at least 1,000 by 2030, which exceeds the pace and size of China’s arsenal projected by the Department’s same annual report published last year. The Pentagon did not estimate the current number of warheads Beijing has, which was assessed to be in the “low-200s” last year with plans to double by the end of this decade.

The Pentagon says the People’s Liberation Army (PLA), the formal name for China’s military, is seeking to build a stockpile many times larger as part of its decades-long march to establish a “world-class” fighting force that can challenge the U.S. in air, land, sea, space and cyberspace. The PLA, headlong into a complete modernization of its forces, may have already fielded a so-called nuclear “triad,” the report said, capable of launching an attack from submarines, bombers, or intercontinental ballistic missiles—a capability Russia and the U.S. have had for decades.

U.S. military leaders often refer to Beijing as “America’s pacing threat,” denoting the challenge China will pose economically, technologically, politically and militarily to the U.S. in the coming years. “We’re witnessing one of the largest shifts in global geostrategic power… It only happens once in a while and it’s not standalone,” Chairman of the Joint Chiefs of Staff Army General Mark Milley said Wednesday at the Aspen Security Forum in Washington.

The report comes just weeks after news that the Chinese successfully tested a nuclear-capable weapon, called a “hypersonic glide vehicle,” which sent tremors through national security circles in Washington. The capability came years before analysts believed China would be able to develop it. Last week, Milley compared the test to 1957 when the Soviet Union successfully launched Sputnik, the world’s first satellite, that revealed the U.S. was technologically behind in the space race.

The U.S. has worked for decades to cut its nuclear weapons arsenal following the Cold War arms race with the Soviet Union. The American stockpile now stands at 3,750 warheads, but the U.S. is limited to 1,550 deployable weapons under a bilateral treaty known as New START with Russia. The landmark treaty, which the Biden Administration extended for five years with Russian President Vladimir Putin, remains in force until February 2026.

China, however, is not part of that agreement and therefore is not obligated to publicly reveal the size and scope of its nuclear forces. The U.S. did approach China about joining New START, but it was met with indifference by Beijing, given the vast disparity in the size of its stockpile to the U.S. and Russia.

If China’s nuclear expansion does meet the Pentagon’s assessment, both Moscow and Washington will likely apply more pressure to bring China into strategic talks and future arms control conversations. “Ultimately, this report emphasizes the importance that China agrees to engage with the United States in a meaningful dialogue on arms control and risk reduction so as to increase stability and transparency as well as to minimize the possibility of unconstrained nuclear weapons competition in the years ahead,” said Shannon Bugos, a research associate at the non-profit Arms Control Association.

New satellite images, published by the Federation of American Scientists and others, reveal that China has quietly constructed hundreds of new silos capable of launching long-range ballistic missiles. It may represent one aspect of China’s expansion amid all three legs of its nuclear triad, which the Pentagon noted in its new report, but the overall strategy remains unclear, outside analysts say.

Hans Kristensen, a nuclear weapons expert at the Federation of American Scientists, said the “significant increase” of Chinese weapons in the Department of Defense (DoD) report provided no certainty of a build-up. “I have to caution that DoD tends to use the high end of the intelligence community estimates,” he said.

China became a nuclear weapons power in 1964 but has restrained its strategic military expansion—until recently. The PLA now has an estimated 355 ships and submarines, making it the world’s largest Navy. China already has the largest active-duty army at 975,000 and the third largest air force with 2,800 total aircraft. “The PLA’s evolving capabilities and concepts continue to strengthen (China’s) ability to ‘fight and win wars’ against a ‘strong enemy,’—a likely euphemism for the United States,” the report said.

Read more: The U.S. Risks Catastrophe if it Doesn’t Clarify its Taiwan Strategy

The largest potential flashpoint with the U.S. is currently in Taiwan, which politically split from the mainland in 1949 following China’s civil war. Last month, Chinese President Xi Jinping vowed to pursue a peaceful reunification with the island, and Beijing has sent nearly 150 warplane sorties into Taiwan’s Air Defense Zone in recent weeks. The U.S. has consistently hinted it would defend Taiwan from Chinese attack but hasn’t publicly committed to intervene, banking that that ambiguity would prevent Beijing from invading for fear of wider war with the United States. President Joe Biden recently said the U.S. military would step in against any Chinese attack, but the Administration later walked it back. Last week, the Taiwanese President confirmed that some U.S. military are in Taiwan training Taiwanese troops. The Pentagon hasn’t commented. 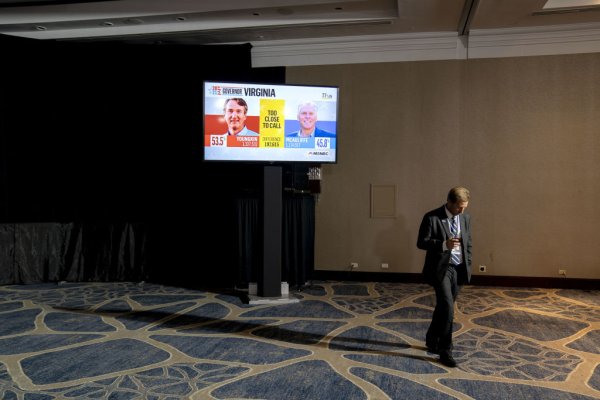 What Democrats Need to Learn from Youngkin's Win in Virginia
Next Up: Editor's Pick