Britain's Chancellor of the Exchequer Rishi Sunak holds up a Green briefcase as he arrives for a speech at the COP26 U.N. Climate Summit in Glasgow, Scotland, Wednesday, Nov. 3, 2021.
Alberto Pezzali/AP
By Frank Jordans and Danica Kirka / AP

But some social justice activists called for scrutiny of investors’ motives, warning that the same financial institutions that profited from funding fossil fuel firms were now being presented as green champions.

There is a growing consensus that the private sector must be involved if the world is to avoid catastrophic global warming. Speaking at the U.N. climate summit in the Scottish city of Glasgow, Britain’s Treasury chief Rishi Sunak said that while countries such as the U.K. are providing fresh funds to help poor countries cope with climate change, “public investment alone isn’t enough.”

He lauded a pledge Wednesday by a group of over 450 major financial institutions to align their investments with the 2015 Paris climate accord — which calls for reducing carbon dioxide emissions and other efforts to limit global warming to 1.5 degrees Celsius (2.7 Fahrenheit) above pre-industrial levels.

“This is a historic wall of capital for the net-zero transition around the world,” Sunak said at the conference known as COP26.

That goal — which means limiting greenhouse gas emissions to the amount that can be absorbed again through natural or artificial ways — is increasingly being embraced by companies and governments around the world.

Scientists say fossil fuel use has to drop drastically over the coming decade to achieve that goal, meaning investors would likely have to dramatically cut back money going to oil, gas and coal producers.

“It is huge that financial institutions managing $130 trillion in assets are now leading the charge to a net-zero future,” said Helen Mountford, a senior climate expert at the World Resources Institute think tank.

She said that mobilizing massive public and private finance will be key to tackling global warming.

To that end, Sunak said U.K. financial institutions and publicly traded companies will be required to publish plans detailing how green their investments and their own businesses are — in order to ensure they’re actually contributing to reductions in global warming.

As home to the City of London, one of the world’s major financial centers, the U.K. “has a responsibility to lead the way” in financing efforts to fight global warming, said Sunak, potentially becoming “the world’s first net-zero aligned financial center.”

But James Thornton, founder of the environmental law charity ClientEarth, questioned how effective the U.K. effort would be.

“The U.K. market is still hooked on fossil fuels,” he said, calling for a task force to ensure companies don’t “greenwash” their activities — that is, using high-profile announcements of so-called green initiatives to mask other “dirty” activities. Experts also caution there are various ways to calculate net zero — and deciding on one standard definition is one of the big challenges going forward.

Some campaigners were distrustful of the motives of big investors in general.

“Many of the financial institutions meeting today have made a killing from the climate and ecological crisis, and we should be deeply suspicious of any attempt to spin them as the heroes,” said Dorothy Guerrero, head of policy at the nongovernmental group Global Justice Now. “Governments must regulate the process and lead the transition, instead of just handing it over the corporations.”

Speaking on the same panel as Sunak, U.S. Treasury Secretary Janet Yellen described combatting climate change as both a huge financial challenge, with a price tag of $100 trillion, and “the greatest economic opportunity of our time.”

“Many renewables are now cheaper than carbon-based fuel alternatives and have lower long-term operating costs,” she said. “In many cases, it’s simply cost effective to go green.”

“This (conference) has greater energy, more focus, an intensity that I have not felt in any of the other” U.N. climate talks, he said.

But enthusiasm about the meeting was dampened among poorer countries, who noted angrily that Britain and other wealthy countries have failed to meet a previous commitment to provide $100 billion a year to finance climate-related projects in the developing world by 2020. 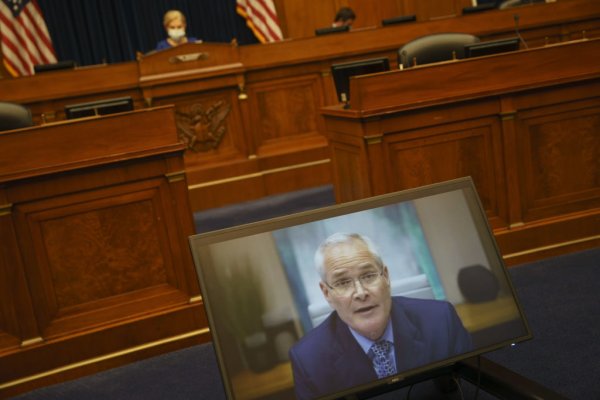 Greenwashing on Facebook: How the World's Biggest Polluters Use Social Media to Obfuscate on Climate Change
Next Up: Editor's Pick