Greenwashing on Facebook: How the World's Biggest Polluters Use Social Media to Obfuscate on Climate Change

Darren Woods carefully read his opening statement when he testified via video link in U.S. Congress last week, only occasionally looking up to make eye contact. Later that day, the ExxonMobil CEO made headlines when he stated that the company “does not spread disinformation regarding climate change.″

Speaking under oath before a House Oversight Committee grilling oil-and-gas majors about whether or not they used disinformation to forestall climate action over multiple decades, Woods said that ExxonMobil “are and have always been truthful, fact-based…and consistent” with mainstream climate science.

The ad, which ran from Oct. 13 to Oct. 22, targeted New Yorkers, claiming that if households in the metro area were “forced” to switch from natural gas to electric, “it could cost you more than $25,600 to replace major appliances.” However, the proposed Council legislation under consideration pertains to new-build homes only.

It’s just one of more than 350 ExxonMobil ads targeting New Yorkers and containing climate change misinformation that Eco-Bot.Net found on Facebook since Sept. 8. Eco-Bot.Net, in collaboration with art and research project ad.watch, uses an AI-powered system to retrieve ads from Facebook’s APIs—and the hidden targeting and impressions data that is attached to each—which are then reviewed for greenwashing by researchers and journalists (including the authors of this article).

According to Eco-Bot.Net, so far this year ExxonMobil has run more than 1,200 such ads across the U.S., totaling over 100 million impressions.

At the same time the appliance ad ran, ExxonMobil posted to its public-facing Facebook pages about lubricants for wind turbines the company is financing in Canada.

This sort of greenwashing—a tactic used to mislead consumers about the green credentials of a company—appears rampant on Facebook. In some cases, it’s embedded in the ads themselves. For example, on May 25, Exxon ran an ad saying, “ExxonMobil is the industry leader in carbon capture and storage, developing innovative solutions needed to help achieve a lower-carbon future.”

“Last Thursday, the CEOs of ExxonMobil and other fossil-fuel companies lied under oath to Congress,” says Geoffrey Supran, who researches climate disinformation at Harvard University. “This [Eco-Bot.Net] investigation adds to mounting evidence of Big Oil’s continued climate disinformation, for which, in my opinion, oil executives should have to answer.”

“ExxonMobil has been prolific at propagandizing the public for decades about climate change,” Suppan notes. Indeed, ExxonMobil ads make up almost three quarters of impressions gleaned by greenwashing ads that are funded by these companies, with ExxonMobil pouring in some $4 million into these ads in 2021 so far, according to Eco-Bot.net.

The company isn’t just using Facebook to obfuscate, but to target people geographically so as to influence proposed legislation related to plans to phase out natural gas in the city, and to supply only renewable energy. Earlier in the year, on May 27, New York City Council accepted Bill Intro 2317, which would prevent natural gas from being installed in new builds. The Bill must be sponsored in the coming weeks in order for it to reach the floor in this Council sitting—or else start from scratch next year. ExxonMobil’s recent ad targeting New Yorkers not only obscures the truth of the Bill, but encourages viewers to sign a petition calling for City Hall to halt current plans to limit the impacts of climate change.

“New York State is doing really big things to get off natural gas. That’s a huge threat to [oil and gas companies], and so we would be a natural target,” says Sonal Jessel, the director of policy at WE ACT, a community building organization in New York.

More than half of ExxonMobil’s New York-targeted Facebook ads were initiated during Climate Week NYC, in the last week of September. There was, based on Eco-Bot.Net’s analysis, a clear shift in the narratives of the company’s ads from the joys of cooking with natural gas to what the advertising language describes as “critical community needs…like schools, hospitals” that the oil and gas industry helps fund. “They’re really trying to scare people out of supporting this legislation in the move away from natural gas,” says Jessel.

When asked about these ads, a spokesperson for ExxonMobil said that the company “has long acknowledged that climate change is real and poses serious risks. In addition to our substantial investments in next generation technologies, ExxonMobil also advocates for responsible climate-related policies.”

Greenwashing campaigns like this by carbon-intensive industries use a variety of “discourses of delay,” says Supran, the Harvard researcher, such as raising the specter of energy poverty, undermining the reliability of green energy, hyping the potential of technology, or presenting fossil fuels as a solution to climate change. Earlier this year, Supran, with Harvard University colleague Naomi Oreskes, published research demonstrating that these discourses of delay are “mutually reinforcing,” and arguing that, combined, they “communicate the idea that individual consumers are primarily the cause of climate change, and companies are simply innocent suppliers giving their customers what they demand,” he says.

Facebook, of course, with its juxtaposition of photos of your sister’s kids and heated discussions about current events, offers an ideal venue for communicating these ideas. Over the COVID-19 pandemic, the problem here has become clear, as Facebook—along with other social media platforms—scrambled to deal with rampant misinformation.

One thing Facebook, along with Instagram (owned by Facebook) and Twitter did was introduce a flagging system in which users could identify misinformation and alert the companies. Bill Posters, Eco-Bot.net cofounder and disinformation researcher, wondered why similar tools didn’t exist for climate change. While Facebook did announce in September that it would be labelling some posts about climate change with a link to their Climate Science Information Center, Posters describes this as a “PR exercise, that only moderates hundreds of posts a day on a platform with over 3 billion users.”

Along with musician Robert del Naja of Massive Attack, Posters built Eco-Bot.Net as a sort of proof-of-concept to show how a better flagging system might work. “We’re posing the question to three of the largest social media companies on earth: if you can create a flagging system for COVID-19 misinformation at a time when the scientific consensus was so disputed, why can’t you do the same thing for climate change disinfo?” said Posters.

When asked about what Facebook is doing to curb ads with false statements about climate change, a spokesperson said that “more than 100,000 people are visiting the Climate Science Center every day,” adding that “we reject ads when one of our independent fact-checking partners rates them as false or misleading and take action against Pages, Groups, accounts, and websites that repeatedly share content rated as false.”

A Twitter spokesperson pointed to a new feature rolling out this week: “To get ahead of misleading narratives about climate issues, and in alignment with COP26 timing, we rolled out climate pre-bunks—reliable, authoritative hubs of information from global experts.”

Throughout COP26, Eco-Bot.Net will release a series of data drops focusing on climate disinformation and greenwashing across different sectors, such as lobbying, aviation and deforestation. Take a recent ad campaign from mining giant Teck Resources. Eco-Bot.Net data shows that soon after national media reported on a call from environmental groups to investigate the environmental impact of its operations in Elk Valley, a region in British Columbia located in the heart of the Canadian Rockies, the company launched a Facebook ad campaign targeting residents there. “Our home, our responsibility. See how we’re committed to protecting water in the Elk Valley for generations to come,” read one of 20 Teck-funded ads, which, combined, accounted for some 100,000 impressions.

When asked about the ads, a spokesperson for Teck says that the company “is committed to protecting water quality where we operate and working to continually strengthen our environmental performance.”

Hu qakǂik (Heidi Gravelle), a 41-year-old from Yaq̓it ʔa·knuqǂiʾit (Tobacco Plains First Nation) in the Elk Valley, saw Teck’s ad campaigns on Facebook, and describes them as “pretense.” “Wuʔu (water) is life…What is happening with the water goes against who I am, who we are,’’ says Gravelle. “Teck needs to be held accountable for the damage that is being done. Actions speak louder than words.”

Thomas Lewton and Alice McCool are independent journalists, and content moderators of Eco-Bot.Net for the duration of COP26. 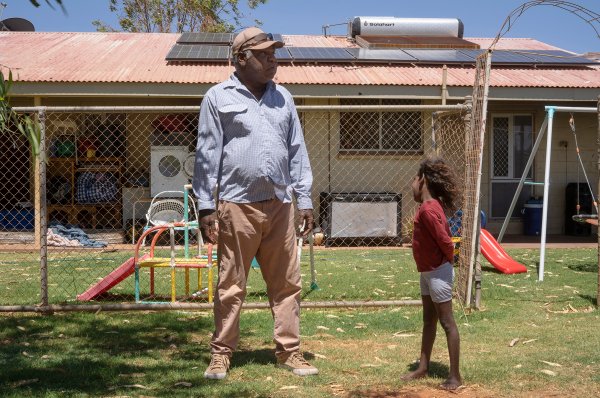 Australia's Green Energy Plan Must Include Aboriginal People
Next Up: Editor's Pick