The U.S. Risks Catastrophe If It Doesn't Clarify Its Taiwan Strategy

IDF fired at simulated targets during the 36th Han Kuang military drills on the west of seashore in Taichung City, testing the ability of the force to repel invasion in the face of Chinas rising threat.
Yin-Shan Chiang-SOPA Images/LightRocket
Ideas
By James Stavridis
Admiral Stavridis (Ret.), a TIME Contributing Editor, was the 16th Supreme Allied Commander at NATO and is an Operating Executive at The Carlyle Group. His new book is 2034: A Novel of the Next World War. His previous nonfiction book was Sailing True North: Ten Admirals and the Voyage of Character

At a recent CNN town hall, President Biden strongly and directly promised to defend Taiwan from a Chinese invasion, saying bluntly “Yes, we have a commitment to do that,” when asked about the situation. But the U.S. very specifically does not have such a commitment. In fact, for decades our policy has been one of so-called “strategic ambiguity,” i.e. choosing not to be definitive as to how the U.S. would respond to an invasion from the mainland of what Beijing regards as its renegade province. Recently, the presence of U.S. troops on the islands became public, provoking angry protests from China.

The White House and the Pentagon promptly walked back the president’s comments, saying the he did not want to signal a change in U.S. policy, and that “strategic ambiguity” remained the policy of the U.S. Ironically, that policy flows from the 1979 Taiwan Relations act, essentially a carefully worded law that allowed the U.S. to support Taiwan in many ways while still recognizing Beijing. This is the heart of the “one China” policy, something then Senator Joe Biden supported while on the Senate Foreign Affairs committee as a junior member.

Some wags have called the President’s comments and the clean-op a shift from “strategic ambiguity” to “strategic confusion.” Jokes aside, there is an urgent need for a coherent national policy not just on the Taiwan issue, but on the larger question of U.S.-China policy. The danger of a miscalculation is growing, and both the U.S. and China are becoming increasingly aggressive in their policies toward the island. Dr. Kurt Campbell, the highly regarded Senior Director on the National Security Council staff with responsibility for U.S. Asian policy, is working on such a broad policy document, which has been rumored for release over the past several months. At the recent Nikkei Virtual Global Forum, Dr. Campbell said that the Biden administration was “committed” to avoiding conflict with China. The question in regard to Taiwan is how to do so.

Many experts, including the President of the Council on Foreign Relations, Dr. Richard Haass, are calling for a more explicit policy of “strategic clarity” in the case of an attack on the island of Taiwan—meaning that the U.S. should lay out the precise financial, diplomatic, and military responses it would take in the case of an invasion. Others are calling for the U.S. to draw closer to Taiwan through economic, diplomatic, and military mechanisms—including deploying more troops to the island (to date, only very small numbers of special forces have been sent for training purposes), selling more advanced weapons systems (such as advanced sea mines, anti-ship missiles, and missile defense systems), and providing higher-level visits from administration officials in Taipei and Washington.

The reality on the placid waters of the South China Sea is that U.S. and Chinese warships and aircraft are in near constant contact as the US and its allies conduct “freedom of navigation patrols,” designed to show that the vast body of water remains international high seas. And all of this comes with a backdrop of rapidly rising Chinese naval, air, and space capability that it can deploy in the South China Sea. While the U.S. remains the preeminent global military power, in the relatively small sea and air space around Taiwan, it would be possible for China to over-master the U.S. forward deployed Seventh Fleet. While the U.S. could “swing” additional carriers and other naval forces from around the world, the question is whether that could happen in time to forestall a successful Chinese invasion.

China has other options as well, notably cyberattacks. With one of the top offensive cyber capabilities in the world, Beijing can use electrons in the place of missiles and damage Taiwanese electric grids, command & control networks, logistic hubs, financial accounts, and military installations. Such attacks could cripple the Taiwanese economy in preparation of an attack, or be used in conjunction with traditional military actions.

READ MORE: How the U.S. Could Sleepwalk Into War With China

The People’s Liberation Army’s Navy (PLAN) is also increasing its operations with fellow Pacific naval power Russia— including a provocative “show the flag” cruise around the home islands of Japan last week. A naval blockade of Taiwan would put significant pressure on the U.S. and Taiwan’s other trading partners to intervene, especially considering the criticality of Taiwan’s highly advanced microchip production role in the global economy.

In response, the U.S. has been ramping up work with its allies in Asia including energizing the concept (and actual military operations) of the quad nations (U.S., India, Australia, Japan); encouraging Japan to significantly increase their defense budget; pushing NATO allies to deploy to Asia as part of “freedom of navigation patrols” in the South China Sea (U.K., France, Germany have committed to doing so); providing the Australians with nuclear submarine technology; exchanging high-level defense visits with Vietnam; pursing military technology that would be critical in a conflict with Beijing (cyber, space, AI, unmanned systems, and hypersonic missiles) and negotiating new basing agreements with Japan and South Korea.

Clearly a modern day “great game” in East Asia is afoot, and Taiwan is at the center of it. The U.S. urgently needs to clarify its strategic approach to the region and identify a coherent whole-of-government and indeed whole-of society approach to dealing with China. Major U.S. companies are deeply invested in China, and our economies are utterly intertwined. A conflict would be a disaster for both nations. What is needed is a multi-pronged strategy that has a military component to create deterrence, especially in cyber, artificial intelligence, space operations, and maritime operations; a diplomatic approach to solidify the so-called “quad” alignment; a values-based strategic communication pillar to solidify support in the region for democracy, liberty, and human rights; an economic approach that emphasizes reciprocal market access for both sides and sanctions on intellectual property theft; and finally a tech structure that emphasizes international standards on everything from crypto-currency to privacy regulations.

The overarching approach of such a strategy is simple: confront where we must—on the issues described above—but seek cooperation wherever we can find it between the two nations. Some examples might be environmental and climate alignment; biomedical research and preparation for the inevitable next pandemic; and arms control talks on nuclear weapons and cyber tools. At a minimum we need straightforward and dedicated communication paths between senior U.S. officials and their Chinese counterparts. We had them with the Soviets in the Cold War, but they are not in existence today. Alongside such “hot lines,” we need detailed protocols describing how our military forces should interact when they encounter each other—staying a set number of miles apart, restricting overflights without warnings, prohibiting turning on fire control radars.

Crisp, professional signaling and communications to Beijing are essential, especially in regard to Taiwan. Our nominated Ambassador—career diplomat and deeply experienced foreign service leader Nicholas Burns—cannot get to China soon enough. And above all, Dr. Campbell’s China strategy needs to be launched at hypersonic speed—right now we need strategic ideas as much as we need missiles. The good news is that there is broad bipartisan agreement on the immediacy of the challenges—now we need a plan.

Correction, Nov. 9: A photo caption in the original version of this story misstated the type of aircraft pictured. They were French-made Mirage jets, not Taiwan’s IDF fighter; the photo has since been replaced. 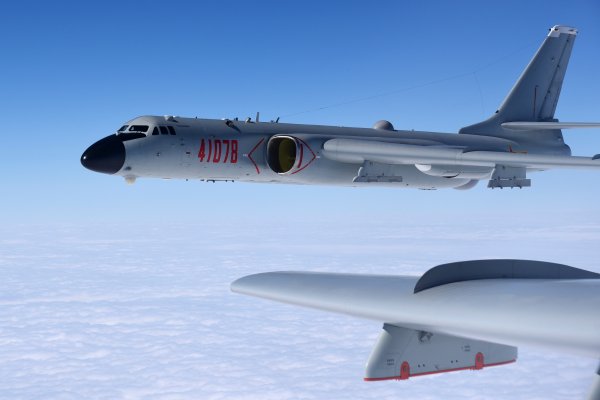 U.S. Troops in Taiwan Add Fuel to Tinderbox
Next Up: Editor's Pick