People gather outside the Chinese Embassy in central London during a demonstration in support of Uyghur people over ongoing human rights violations in China on August 05, 2021.
Vudi Xhymshiti/Anadolu Agency via Getty Images
By Jasmine Aguilera

Both the Biden and Trump Administrations repeatedly condemned China’s persecution of Uyghurs and formally declared the country’s treatment of the mostly Muslim minority group a genocide. The Trump Administration passed the Uyghur Human Rights Policy Act of 2020, imposing sanctions on individuals and entities responsible for human rights abuses against Uyghurs, and the Biden Administration recently designated Uyghurs a priority group for refugee resettlement.

But all that, it turns out, has been mostly talk.

The United States has admitted a grand total of zero Uyghur refugees in the past two fiscal years. In FY2019, only one Chinese national was admitted to the U.S. as a refugee; it is unclear if that individual was a member of the Uyghur minority, which mostly live in China’s northwest region of Xinjiang.

Experts say the main reason for the lack of Uyghur refugees is logistical: it’s next to impossible for Uyghurs in China, most of whom are under extraordinary state surveillance, to access refugee resettlement systems. When Uyghurs do manage to escape to a foreign country, those countries face immense pressure from China to return would-be refugees.

But others argue that U.S. lawmakers, by embracing rhetoric like genocide without providing more effective humanitarian assistance, put themselves in a moral bind. “Why would you want to make a lot of noise about increasing the allowance for refugees when that just might be a meaningless gesture that maybe leads China to be even tougher in the way it treats Uyghurs at home?” says Michael O’Hanlon, a senior fellow and director of research in foreign policy at the Brookings Institution.

China has been detaining millions of Uyghurs in mass detention camps in recent years, and roughly 11 million more live in constant fear that the government could detain them or their family members for an indefinite amount of time, according to details uncovered by The New York Times. Uyghurs who have escaped have described severe abuses inside the camps, including beatings, forced sterilization, and constant surveillance.

Read more: What to Know About China’s Crackdown on a Muslim Minority Group

At least since 2015, China has been pressuring other countries to return Uyghurs who have escaped China illegally. In 2015, Thailand returned about 100 Uyghurs to China, and in 2017, Egypt returned about two dozen “who promptly disappeared upon arriving in China,” according to the State Department. “The Chinese government is probably one of the few in the world that persecutes a minority and wants to catch them abroad,” says Maya Wang, senior China researcher in the Asia division at Human Rights Watch. “For Uyghurs, there is really no where for them to go.”

In a statement to TIME, the U.S. State Department says Uyghurs outside of China are currently able to access the refugee resettlement program. The agency does not publicly disclose the number of applications currently being processed.

Some members of Congress have begun pressuring Biden’s State Department to do more to protect Uyghurs who have escaped China’s borders. In an Oct. 21 letter to Secretary of State Anthony Blinken, 16 members of Congress called on the department to step up pressure on foreign countries “to end all deportation efforts to Xinjiang and to ensure the safety of those who do not wish to return.”

Read More: Rebuilding the U.S. Refugee Resettlement Program Is an Opportunity for Biden to Seize

Still, refugee resettlement alone is not enough to prevent the persecution of the Uyghur population in Xinjiang. It would take much more intense pressure from world leaders and a more cooperative Chinese government, which currently shows no signs of changing its tactics. “Refugee resettlement isn’t addressing root causes, that’s not what this is about,” says Bill Frelick, director of the Refugee and Migrant Rights Division at Human Rights Watch, an international NGO that investigates human rights abuses around the world. “This is a tool to help rescue people who need protection, who can’t find protection in the place where they’ve landed.”

A path to progress

Addressing the central issue—helping Uyghurs inside China to access refugee systems—may be nearly impossible given the geopolitics in the region, experts say. But there is a lot that the U.S. government can do along the edges.

O’Hanlon and Frelick pointed, for example, at the Trump Administration’s decision to lower annual refugee caps and gut refugee and resettlement programs. In FY21, which ended in September, only 11,411 refugees total were admitted to the U.S.—the lowest since the program began in 1980. Refugee admissions in FY20 were only slightly higher, at 11,814. While those dismal numbers can’t explain the lack of Uyghur refugees altogether, the low caps certainly didn’t help, they say.

In the last few months, the Biden Administration has pushed to reverse those trends. It has started to rebuild resettlement programs and raised the refugee ceiling for FY22 to 125,000, the highest since 1993, when admissions were caped at 142,000.

Wang says the U.S. can also do more to fast-track the resettlement of Uyghurs. Those who have fled China and who have already been in the U.S. sometimes must wait five or more years before they’re granted refugee status. “The long wait times, to me, seem to suggest a mismatch between rhetoric and actual commitment,” she says. “If the U.S.’s commitment towards refugees and asylum seekers, including those from Xinjiang, are real…efforts should be made to make it easier for asylum seekers and refugees to make a life here [in the U.S.] after they fled.”

Meanwhile, O’Hanlon and others argue that U.S. officials should be careful about the language they use to both describe the Uyghur crisis and offer help. O’Hanlon has been critical of the U.S.’s decision to describe China’s treatment of the Uyghurs as genocide, on the grounds that such rhetoric heightens tensions and makes global conflict more likely—without actually aiding the Uyghur population.

“Certainly [the U.S. has] been prepared to put on sanctions over the Uyghur issue, and to call out China, but they’ve also been nervous about letting this relationship deteriorate too much,” O’Hanlon says. “I think [Biden] should be selective in use of language…and look for ways to be constructive and address the problem rather than inflaming passions on both sides in a way that’s likely to just make the problem worse.” 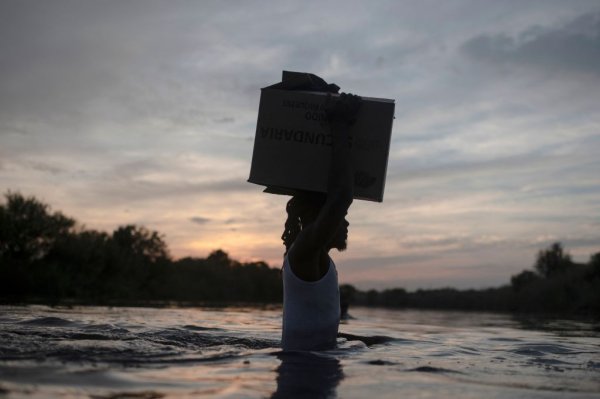 Migrants and Refugees Face an Invisible Trauma We Can’t Ignore
Next Up: Editor's Pick