This week, thousands of ministers and diplomats from across the world are descending on an event campus in Glasgow, Scotland for the most important climate conference in recent years—and perhaps the most significant international meeting of our lifetimes.

From Oct. 31 to Nov. 12, they’ll be bringing forward countries’ first updated plans to cut emissions since the Paris accords six years ago, and finalizing the so-called “Paris Rulebook” that will govern how the agreement’s ambitious emissions reductions will actually be implemented around the world. The conference’s organizers have laid out several goals for the event, among them eliminating the world’s coal power plants, replacing gasoline vehicles with electric models and reaching an agreement for wealthy nations to provide $100 billion annually in financing to support the climate transition in the developing world.

It’s hard to overstate the urgency behind those negotiations. Delayed from 2020 due to the global pandemic, COP26 follows a year in which, from massive wildfires in Siberia and unprecedented flooding in Germany and Belgium, to famine in Madagascar and record-shattering heat in the American West, it’s become abundantly clear that climate change has contributed to increasingly frequent and severe weather events. It’s also set against the backdrop of the most recent scientific report from the U.N.’s Intergovernmental Panel on Climate Change (IPCC), published in August of this year, which laid out the current state of the worlds’ climate and the consequences of inaction in its starkest-ever terms.

Some progress has been made in recent years, but the world is still far off-track to achieve the emissions reductions goals of the Paris Accords, with countries’ current commitments still likely to produce a devastating level of global heating in coming decades—if nations follow through on them at all. But as countries hammer out their differences in Glasgow’s meeting halls, it’s anyone’s guess if they will reach an agreement to zero out the world’s emissions in coming decades. A recent European energy crisis, COVID-19 logistical headaches and crucial absences by some world leaders have put the success of negotiations in doubt, while some observers worry that the world’s rich nations will continue to hold back crucial financial support for less advanced economies, which have contributed far less to creating the current climate crisis.

From outside the negotiating room, it can be difficult to cut through the jargon and see what’s actually at stake in these talks. Our reporters have put together a list showing where the world stands on the crucial goals of COP26, what we need to achieve and what stands in the way.

Negotiators want to finalize the only outstanding part of the Paris Agreement: Article 6. It would create a global carbon market—in which a country or business could pay for projects that reduce emissions elsewhere and then count those reductions in their own targets (often known as “offsetting”). The hope is that a carbon market would drive funds to the places where emissions can be cut most efficiently, making it cheaper to achieve global climate goals. But without robust rules, a market system could allow for emissions reductions to be counted twice or allow countries to sell credits for emissions cut long ago or projects that would have happened anyway. Many activists say that if countries like Brazil, Saudi Arabia and Australia succeed in pushing through lax rules, it would slow climate action and reward polluters.—Ciara Nugent

Renewable energy costs have fallen dramatically in recent years, and in much of the world building new solar or wind power infrastructure is cheaper than coal or natural gas. But the world isn’t building those new power plants nearly fast enough to bring down emissions in line with the targets of the Paris Accords, especially in the developing world, where borrowing costs necessary to build such projects can be many times higher than in wealthy nations.

China leads the world in clean energy investment, followed by the U.S., Germany, Japan and the U.K. According to the International Energy Agency (IEA), renewable energy investment needs to triple over the next decade in order to zero out emissions by 2050, with 70% of those funds to be spent in the developing world.—Alejandro de la Garza

Improve collaboration between the public and private sectors

Though the center of COP26 is negotiations between countries, governments know policy alone can’t solve climate change. Weaning the global economy off fossil fuels is impossible without collaboration from businesses and civil society. COP organizers want to encourage more climate action from the public—through public-facing events— and crucially from the private sector. There are promising signs: a fifth of the world’s 2,000 largest public companies have already committed to net-zero targets, though campaigners warn that many lack firm plans to reach those targets. Business leaders will be pushing for governments to introduce new policies that help them do more —such as subsidies and investments for clean technologies, or carbon pricing systems that reward those who cut emissions fastest.—Ciara Nugent

Electric vehicles (EVs) are becoming more common around the world, but they aren’t taking over from their polluting, gasoline-powered predecessors fast enough.

The world’s roadways had about 10 million EVs as of the end of 2020, and the IEA predicts the next ten years will see a massive expansion to 145 million zero-emissions vehicles (7% of the world’s market) by 2030, thanks in part to falling costs and improved charging infrastructure. But that number will have to be much higher—230 million vehicles, or 12% of all the world’s cars and trucks in 2030—to meet the goals of the Paris Agreement.—Alejandro de la Garza

Forests are disappearing around the world, though they’re not being logged as fast as they were a few decades ago. The world lost 7.8 million hectares of forest per year between 1990 and 2000, compared to 4.7 million hectares per year from 2010 to 2020, according to the U.N. Food and Agriculture Organization, but the cumulative loss since 1990 still adds up to an area the size of Libya: 178 million hectares, and accounts for the second-largest source of human-caused greenhouse gas emissions after burning fossil fuels.

The COP26 organizers are pushing to reverse that deforestation trend by 2030, a plan which could include pooling government funding to protect vital forests like the Congo Basin.—Alejandro de la Garza

Commit to putting an end to coal

Coal is one of the dirtiest energy sources in use, accounting for 30% of global CO2 emissions, according to the International Energy Agency. Yet it still generates 38% of the world’s electricity. COP26 organizers have set a goal to “consign coal to history,” and U.N. secretary general António Guterres is urging rich nations to commit to phase out coal power by 2030 and developing nations by 2040, saying that doing so would be “the single most important step to get in line with the 1.5-degree goal of the Paris Agreement.” Moving away from coal may prove harder for some countries than others.—Aryn Baker

Even if nations can somehow agree on greenhouse gas emission reduction targets in line with meeting the goal of limiting global warming to 1.5°C by the end of the century, the droughts, heatwaves and extreme weather we have witnessed over the past year will remain part of the new normal. Without an agreement, they will only get worse. As a result, cities will have to prepare for a future of climatic extremes. Yet nearly half the world’s major cities lack plans to keep their populations safe from climate threats. According to environmental-impact monitoring charity CDP, only 88 cities out of 850 made it onto the organization’s 2020 A List for environmental action and climate change resilience. —Aryn Baker

Providing assistance to countries most vulnerable to the impacts of climate change, often who have done little to contribute to the current levels of carbon emissions, was a cornerstone of the 2015 Paris Agreement. The plan, first developed at the 2009 COP in Copenhagen, was ambitious—to provide $100 billion a year by 2020 from public and private sources—but also vague.

Data from the OECD show that climate finance only reached $80 billion in 2019 and a recent report from Oxfam examined the levels of funding already pledged and said that the $100 billion target is unlikely to be met, even by 2025. It might be even worse than that: there are disputes about how much money has actually been pledged and a report last year commissioned by U.N. Secretary General António Guterres found that donors were over-reporting climate-funding by $3-$4 billion each. Ahead of COP26, a number of countries, including the U.S., made additional climate finance pledges but there is still a large shortfall. The issue of climate finance and the gap in funding provided has caused a lack of trust from developing countries which could impact the ability to reach agreements at COP26. —Jennifer Duggan 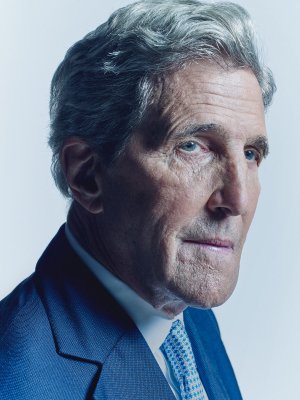 John Kerry Is Bringing America Back Into the Climate Fight
Next Up: Editor's Pick