Self-Care Doesn't Have to Be Selfish: Mindfulness Teacher Shelly Tygielski On Generosity and Well-Being

It’s easy to careen through the day, barely conscious of our transactions large and small. Pay for a coffee with a wave of your phone, order a week’s groceries by voice command. And if a disaster has hit the news, you can donate money and sprinkle supportive emojis across social, just tap, tap, tap.

This is the age of insta-generosity, insta-consumption, insta-everything. And that’s not entirely a bad thing. We can raise vast amounts of aid in hours with the same tools we use to make sneakers appear on our doorstep. But in both cases, we’re scarily removed from the people on the other side of our screens. And that gulf between us has never been more acute than now as we live more of our lives remotely.

Addressing this disconnect was a priority when mindfulness teacher and community activist Shelly Tygielski created a grassroots mutual aid organization called Pandemic of Love in March of 2020, just as the coronavirus was bearing down on her South Florida neighborhood.

As she writes in her new book, “Sit Down to Rise Up: How Radical Self-Care Can Change the World,” the concept was to match donors directly with those in need ensuring that there’d be an interaction between giver and receiver.

“What I’m proudest of is the fact that I purposely built Pandemic of Love to be sure that human beings could connect at a time of isolation,” says Shelly. “We could have taken money on behalf of people and then just distributed it, which is fine. But I knew that we all needed human interaction as much as anything else.”

A year and a half later, the organization has become a global phenomenon, connecting almost two million people who’ve shown up for each other and been changed by the experience. And in a year of many heroes, Shelly was named one of CNN’s 2020 Heroes of the Year, not just because of the $60 million in aid that Pandemic of Love has facilitated, but because of the unique way the group uses social media and technology to spark person-to-person connections.

“It’s not just giving financial assistance or supplies,” says Shelly. “It’s that you’re making someone feel seen and letting them know that they’re not alone. And the people on the donor side also feel seen from these interactions.”

These very personal transactions are not without vulnerability, both for those who are asking for help from a stranger, and the givers who are opening themselves to another’s life and struggle. Clearly, there’s a yearning for this kind of connection. Thousands of Pandemic of Love volunteers are matching people across the world to provide everything from diapers for a single mom to rent money.

This kind of mutual aid addresses our other pandemic, that of toxic division. The book includes uplifting stories in which Pandemic of Love donors and recipients crossed political and cultural barriers to see each other differently. (We’ve showcased some of these case studies in this newsletter. And below, you’ll find the tale of two women who connected, much to their own surprise: Eileen, a self-described New York hippy liberal, and Christine, a single mom from Mobile, Alabama.)

The other argument Shelly makes is that self-care and community care are not in opposition; they’re entwined. “The successful inner journey of me leads towards a collective healing of we,” she writes. It was a lesson she discovered as a single mother dealing with a newly diagnosed health condition. She’d hit a wall and admitted to a few close friends that she couldn’t handle what was on her plate.

Those friends became a tiny mutual aid group, meeting to share their to-do lists and, most importantly, their self-care plans. They supported each other, offering help, like covering school pickups, and they kept each other accountable for the kind of self-care that fosters resilience, like prioritizing sleep. Shelly expanded this grassroots safety net to a wider array of acquaintances and found that when one person raised their hand and said, “I need help,” a door opened for everyone.

“In emergencies like when there’s a death or a hurricane, everyone steps up,” says Shelly. “But we need to normalize that kind of community care even when there isn’t a disaster. Social media isn’t going to show you what might be happening on your street. You don’t know if your neighbor is struggling with mental illness or if they just lost their job because we just don’t talk about it. We need to create forums for these conversations.”

When I ask Shelly how to create a community of care if we aren’t as organized as she is, she points out that she didn’t intend to create a huge aid organization. Her original goal was just to make sure the people in her community had enough to make it through the pandemic. She says:

But why not just focus on your own well-being and your immediate family, if you feel depleted?

“We can’t survive without each other,” says Shelly. “Our grandparents and great grandparent’s generation knew this. And it’s still true. Look at the supply chain issues that are happening right now. Or the first responders and front-line workers we relied upon over the last year.”

Shelly offers a short meditation as a way of reminding ourselves that we don’t exist in a bubble. Whenever she buys something, even a tomato, she tries to stop and think about the provenance of that item.

“Consider the thousands of hands that touched that tomato in some way—those who tended the earth, planted the seeds, and packed the boxes,” she says. “And all millions who inspired and cared for those people. It’s a beautiful meditative exercise to just pause for a moment of reflection and think about that as often as you can during the day. It’s humbling.”

You might call it heart training, this decision to visualize the bonds that connect us to the world, and to each other. At the very least, it’s a bid for awe over anger.

For More On Building Community: Check out this TEDTalk, Inspiring a life of immersion. We each want to live a life of purpose, but where to start? In this luminous, wide-ranging talk, Jacqueline Novogratz introduces us to people who have immersed themselves in a cause, a community, a passion for justice.

How to Fend Off Winter Depression: As the days get shorter and the nights start earlier, take these steps to help prevent seasonal affective disorder.

People Aren’t Meant to Talk This Much: A lot is wrong with the internet, but much of it boils down to this one problem: We are all constantly talking to one another. Is there a case to be made for scaling back and opting for fewer, deeper ties?

How to Learn Everything: The MasterClass Diaries: Irina Dumitrescu, an essayist and professor of medieval English literature, binged for six months on online courses led by celebrities like RuPaul, Anna Wintour, and Gordon Ramsay. Her piece on MasterClass is a delightful take on the power of celebrity and learning new things. (This piece was included in this year’s The Best American Essays” collection.)

Here’s a reminder that creating a community of generosity elevates us all. And this week, we’re republishing a story from Pandemic of Love that shows how giving can help us cultural divides.

Eileen is a self-described liberal, feminist, hippie-New Yorker. A retired social worker, she worked primarily with the LBGTQIA+ and immigrant populations. In early April, she was matched by Pandemic of Love with a single mother named Christine in Mobile, Alabama, who needed help.

Eileen describes the initial shock of the connection as one between “two very different people from two very different worlds.” When Eileen found out that she had voted for President Trump in the last election and planned to vote for him again, her initial instinct was to ask if she could be re-assigned to another family. Christine had the same thought at the start, “to be honest; I didn’t think I was going to like her when we met. She is a New Yorker, and I am just a Southern girl at heart.”

But the pair decided to move forward. And since July, Eileen has been sending Christine and her family bi-weekly help for groceries and essentials, and upon learning that Christine’s 8-year old daughter loves to read, she started to send her books. “I honestly do not know what I would have done without her all this time,” says Christine.

The two unlikely friends speak and text frequently and have talked about everything from the Holocaust to the Confederate Army. Christine is certain she and Eileen will be friends for life. And while Eileen began the relationship thinking Christine was living in a red-state bubble, she says she’s shocked to realize “how long I have been living in a bubble, too.”

Story courtesy of Shelly Tygielski, author of “Sit Down to Rise Up” and founder of Pandemic of Love, a grassroots mutual aid organization that matches volunteers, donors, and those in need. 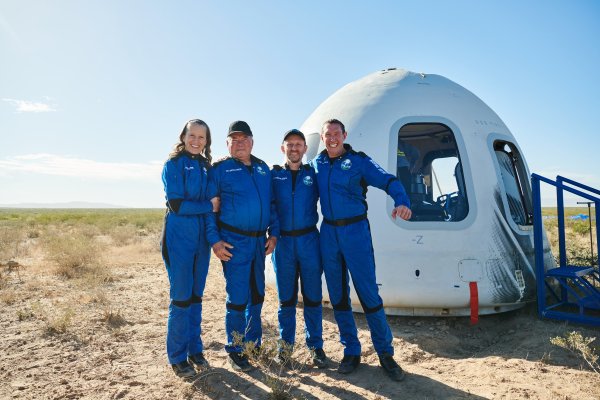 How William Shatner Turned a Flight of Fancy Into a Lyrical Pitch For the Planet
Next Up: Editor's Pick