Getty Images
Ideas
By Simran Jeet Singh
Jeet Singh is Executive Director for the Aspen Institute's Inclusive America Project. He is Senior Adviser for Equity and Inclusion at YSC Consulting, a Soro Equality Fellow with the Open Society Foundations, and a Visiting Professor at Union Seminary. His latest book is The Light We Give: The Power of Sikh Wisdom to Transform Your Life (Riverhead / Penguin Random House, July 2022).

Corporate America is making some gains in expanding its commitment to diversity. According to a new study from The Conference Board and ESG data analytics firm ESGAUGE, 2021 marks the first time that a majority of S&P 500 companies—59%—have disclosed the racial makeup of their boards. The increased transparency is widely considered an important step in advancing equity and inclusion.

At the same time, The Conference Board’s study found that even with these increased efforts, from the S&P 500 companies that disclose this data, more than 75% of their board members identify as white. Another recent study from Spencer Stuart confirmed this same finding: while S&P 500 companies are adding more people of color to their boards, more than three-quarters of them are white and 70% are men.

Last December, Nasdaq filed a proposal with the US Securities and Exchange Commission (SEC) to advance diversity on corporate boards. In August 2021, more than nine months later, the SEC approved the rules. Now, all Nasdaq-listed companies are expected to disclose board-level diversity annually. Their boards will also be expected to have two directors from underrepresented groups, including one who is female and another who is either an ethnic minority or LGBTQ+; companies that fail to meet this standard will be required to explain in writing why they do not or if they are taking an alternate approach to meeting diversity expectations.

Some have opposed the measures, including the two Republicans on the SEC. Commissioner Hester Peirce registered her opposition in a lengthy statement that, among other things, argued that the new requirements “encourage discrimination and effectively compel speech by both individuals and issues in a way that offends protected Constitutional interests.” Others, such as Harvard Professor Jesse Fried, refuted Nasdaq’s claims that diverse boards are linked to enhanced financial performance, arguing that they do not result in higher stock prices, “the outcome investors actually care about.”

Two groups have already filed challenges against these new rules. On October 5, The National Center for Public Policy Research, a conservative think tank, submitted a petition to the U.S. Court of Appeals for the Third Circuit. This followed an earlier petition filed by the Alliance for Fair Board Recruitment in opposition to the decision. The Alliance has a history of opposing diversity measures: This past July, after California announced its own mandates to help diversity corporate boards, the Alliance took legal action against the state, calling the measures “unconstitutional and patronizing social engineering.”

While many have debated Nasdaq’s proposal and although many continue to do so, what’s missing is a larger conversation about board diversity. Rather than focusing on symptoms and which band-aids to apply, perhaps it’s time to ask a more pressing question: Why are corporate boards failing to become more diverse?

In 2020, the Institutional Shareholder Service’s ESG division found that underrepresented ethnic and racial groups make up only 12.5% of corporate boards. This proportion does not reflect the composition of America, 40% of which is made up of ethnic and racial minorities. Moreover, the 12.5% number reflects a mere 2.5% jump since 2015. Despite claims to change, corporate boards have remained overwhelmingly white.

They have remained overwhelmingly male, too. In Deloitte’s 2017 study on Women in the Boardroom, women—who make up more than half the world’s population—made up less than 15% of board seats at the largest companies and less than 4% of board chairs. Two years later, the same study found that women held only 16.9% of board seats globally and 5.3% of board chairs. These are marginal gains in an industry clamoring for more diverse representation. To quote the authors of a 2021 study by the Alliance for Board Diversity and Deloitte, “progress has been painfully slow.”

The greatest obstacle to board diversification is outmoded approaches to board recruitment. Typically, boards rely on their own networks to recruit for positions in their boards. And our networks are not socially neutral. For instance, the 2013 American Values Survey found that 75% of white Americans have “entirely white social networks without any minority presence.” Juxtapose this with Deloitte’s 2021 report on board diversity, and it comes as no surprise that about 80% of board directors in the Fortune 100 and Fortune 500 are white. This also helps explain their finding that the fastest growing underrepresented group in these boards is white women.

In addition to their relatively low numbers, 36% of underrepresented directors serve on multiple Fortune 500 boards, a “recycle rate” far higher than their white counterparts. The industry’s overreliance on a select few individuals who meet their diversity goals reveals a deeper recruitment problem. In addition to expanding their networks, leaders must also expand their definition of who will bring value to their boardroom. Until that happens, our pools will remain limited—and the ocean will remain largely untapped.

We hear this refrain often when working with corporate boards to help them diversify. There just aren’t that many candidates to choose from. But there’s an affinity bias here that remains unchecked. Board members have a bias towards what a good board member looks like, and too often, it looks a lot like what they have seen before. This does not just refer to visible attributes that reflect our own; we measure value based on what we have known to be valuable. The challenge, though, is that our outlooks are limited by our experiences.

Acknowledging our affinity bias is the first step to recruiting and retaining diverse talent. If we can recognize our own barriers to valuing diversity, then we can begin working to remove those barriers. This step requires us to look within, honestly and openly, and identify how our biases might be driving our behaviors and our decision-making.

A second practical step is to appreciate what the research bears out: that different kinds of diversity bring value to a boardroom. To truly unlock value, corporate boards must expand their views of what diversity means. Instead of focusing on single aspects that directors can offer, they must begin balancing the unique skillsets, perspectives, and cognitive approaches that each director brings to the table.

Third, in recognizing their biases and in expanding their views of diversity, corporate boards must look to expand their recruiting pipelines. There’s not a talent gap. There’s an equity gap. The reason we have difficulty finding people from marginalized groups for corporate boards is encoded in the way we refer to them: they are marginalized. Board directors have to make the concerted effort to go beyond their existing networks in order to recruit diverse talent.

Change comes slowly, yes, and institutional change is even slower. But change is inevitable, and our future course is clear. So the only outstanding question is this: Will corporate leaders have the courage to lead change, or will they remain stuck in the past? 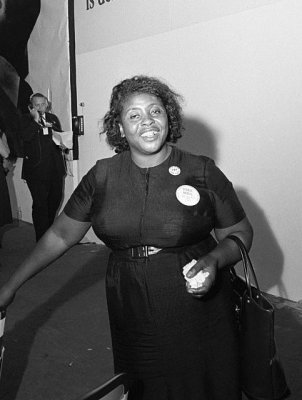