Addressing a crowd in Madison, Wisc., in 1971, civil rights activist Fannie Lou Hamer said she knew what it meant to be hungry. She recalled growing up in the 1920s and 1930s in a sharecropping family and often going to bed with an empty stomach. “I know what the pain of hunger is about,” she told the crowd.

The youngest of 20 children, Hamer did her part on the plantation to help her family make ends meet. In her autobiography To Praise Our Bridges, Hamer vividly recalls memories of experiencing poverty as a child: “To feed us during the winter months mama would go ’round from plantation to plantation and would ask landowners if she could have the cotton that had been left…Then she’d take that bale of cotton and sell it and that would give us some of the food that we would need.”

Hamer’s childhood experiences drove her passion later in life when she not only fought for Black political power, but economic justice as well. She understood that Black political rights could not be divorced from economic rights and recognized that economic security was fundamental to the struggle for civil rights. “If you have a pig in your backyard, if you have some vegetables in your garden, you can feed yourself and your family, and nobody can push you around,” she insisted in the late 1960s.

The dire financial challenges Hamer’s family endured during the early 20th century mirrored the lives of many Black people in Mississippi—and across the South—during this period. A study of Indianola, Miss., by anthropologist Hortense Powdermaker captured the devastating effects of sharecropping in the South during the 1930s. Of the thousands of Black people who worked as sharecroppers, Powdermaker found that only 25% to 30% received a fair settlement for crops at the end of the year. Half of the Black families in the Mississippi Delta during this period could not afford to maintain a nutritious diet.

Thirty years after Powdermaker’s study, economic conditions in Mississippi had not improved much. By 1960, 75% of all families in the Mississippi Delta were living below the federal poverty line of $3,000. These conditions were worse for Black families in the region with the median annual income of a Black family in Quitman County, Miss., estimated at $819—less than a third of the $3,000 line. On a national level, an estimated 40% of Black Americans in the United States were living under the poverty line in 1965.

Read more: What Made Fannie Lou Hamer’s Message on Civil Rights So Radical—And So Enduring

Despite having limited material resources, Hamer was undeterred in her fight for economic justice. True to her belief that one must take tangible steps to change society, she came up with a practical solution for addressing hunger and malnutrition. In 1969, Hamer launched the Freedom Farm Cooperative (FFC), a community-based rural and economic development project. With a donation of $10,000 from Measure for Measure, a charitable organization based in Wisconsin, Hamer purchased 40 acres in her hometown of Ruleville, Miss., with plans to develop the land to provide resources for local residents in need. A wide array of individuals and institutions contributed to Hamer’s Freedom Farm, including celebrity activist Harry Belafonte and leaders of the National Council of Negro Women—the largest Black women’s organization in the U.S. during the 1960s.

Hamer envisioned the cooperative as a means of empowering impoverished residents in the state, and the cooperative grew to over 640 acres. Locals could join Freedom Farm for $1 a month—though no one was ever turned away who could not pay. The FFC devoted some land to growing profitable crops such as cotton, but also set aside land for the growing of vegetables—including sweet potatoes, kale, tomatoes, and string beans—for community members, ensuring that residents had food and security.

Their community garden yielded crops that served more than 1,600 families in the Mississippi Delta, as well as other parts of the country. An estimated 10% of the crops grown at Freedom Farm went to local residents who could not work in the fields. During the early 1970s, the FFC also shipped the surplus to Black families from Mississippi who had relocated to Northern cities. Hamer held an expansive vision on the ways to address poverty in Sunflower County. Therefore, she also used Freedom Farm to create housing for local families in need—a program that housed more than 70 families.

While the FFC significantly improved the lives of Black people in the Mississippi Delta, it provided resources to anyone in need, regardless of race or ethnicity. As Hamer explained to novelist Paule Marshall in 1970, “Hunger has no color line. And I’d walk a mile for any man who is hungry, Black or white.”

In 1976, following a series of setbacks, including tornadoes, flooding and the sudden death of the farm’s business manager in 1974, Hamer’s Freedom Farm closed its doors. Though short-lived, the FFC provided a means for Hamer to feed and empower impoverished Americans and in so doing, advance economic justice in the late-1960s and 1970s.

More than 40 years after Hamer’s death in 1977, the problem of economic inequality persists in the United States. Today, an estimated one in seven Americans live in poverty. Despite our nation’s wealth, close to half of the U.S. population either live in poverty or can be classified as low income, and an estimated 18.8% of Black households live below the poverty threshold. In Mississippi, 48% of people are poor or low-income—a group that includes 65% of Mississippi’s Black population.

Read more: The Speeches That Made Fannie Lou Hamer a Civil-Rights Icon

Fannie Lou Hamer’s passion and ingenuity—and most of all, her emphasis on empowering those in need—serve as a model for today as activists continue to demand economic justice. As Hamer once argued, “The only thing we can do, women and men, whether you [are] white or black, is to work together.”

Hamer’s message resonates today through several initiatives—most notably, the Poor People’s Campaign: A National Call for Moral Revival. Founded by Rev. Dr. William J. Barber II and Rev. Dr. Liz Theoharis in 2017, the Poor People’s Campaign demands better living conditions for impoverished Americans and draws on the activism of the Civil Rights Movement. Their campaign calls on Americans of all races and socioeconomic backgrounds to fight for economic justice. Like Hamer, Barber and Theoharis view the struggle for economic justice as a moral imperative.

The fight for economic justice is also central to the work of democracy. As Hamer argued, all Americans—and especially those in public office—must advocate policies that would empower impoverished people. Only then will the nation fully live up to its ideals. “To have a great country,” Hamer told a predominantly white audience in Kentucky in 1968, “not only will we have to have political power, but we will have to have economic power as well.”

Keisha N. Blain is an associate professor of History at the University of Pittsburgh. She is the author of Set the World on Fire: Black Nationalist Women and the Global Struggle for Freedom and Until I Am Free: Fannie Lou Hamer’s Enduring Message, available now from Penguin Random House. 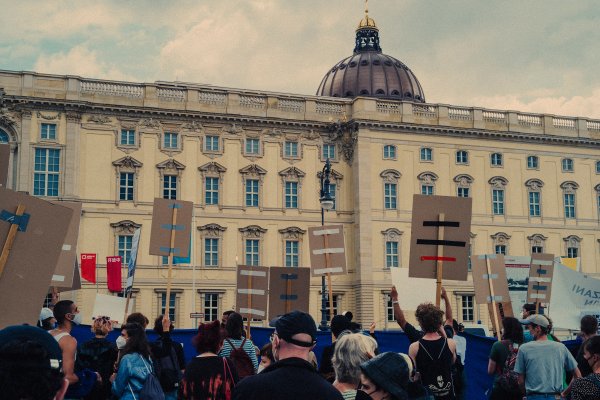 How Activists Are Radically Interrogating Berlin’s Colonial Past—and Reshaping Its Future
Next Up: Editor's Pick