Cinematographer Halyna Hutchins Was Killed by a Prop Gun on the Film Set of Rust. Here's What We Know So Far

The cinematographer Halyna Hutchins was killed on Thursday when the actor Alec Baldwin discharged a prop firearm during a film shoot in New Mexico.

The pair had been filming the Western Rust on a ranch near Santa Fe, starring Baldwin as an 1880s outlaw. According to an affidavit signed by detective Joel Cano of the Santa Fe County Sheriff’s Office, Baldwin was rehearsing a scene in which he pointed a revolver at the camera—held by Hutchins—when the gun went off, hitting Hutchins in the chest and director Joel Souza in the shoulder. Hutchins was flown to the University of New Mexico Hospital, where she was pronounced dead; Souza was taken to Christus St. Vincent’s Regional Medical Center for treatment for his injuries.

The gun was not supposed to be loaded. The affidavit stated that Baldwin was handed the gun by assistant director Dave Halls, who believed the gun did not contain live rounds; as such, Halls yelled, “cold gun” to signify its assumed harmlessness. Baldwin was practicing drawing the gun from its holster when it went off. In a press release, the Sheriff’s Office said that Baldwin was questioned by investigators and released. No charges have been filed and the incident remains under investigation.

Reports suggest that the tragedy was a culmination of weeks of on-set turmoil and questionable safety practices. The morning before Hutchins was killed, half-a-dozen camera crew workers walked off the set the morning to protest working conditions, including long hours and withheld pay. On Friday, The Los Angeles Times reported that there were two other accidental gun discharges the week before, causing workers to complain to production about safety. According to the Times, the production proceeded without an investigation into the earlier incidents—and when the workers, who were members of the International Alliance of Theatrical Stage Employees (IATSE), departed the set, they were then replaced by nonunion workers.

“Though we were not made aware of any official complaints concerning weapon or prop safety on set, we will be conducting an internal review of our procedures while production is shut down,” the film’s production company, Rust Movie Productions, said in a statement. “We will continue to cooperate with the Santa Fe authorities in their investigation and offer mental health services to the cast and crew during this tragic time.”

On Friday morning, Baldwin addressed the incident on Twitter, writing: “There are no words to convey my shock and sadness regarding the tragic accident that took the life of Halyna Hutchins, a wife, mother and deeply admired colleague of ours. I’m fully cooperating with the police investigation to address how this tragedy occurred and I am in touch with her husband, offering my support to him and his family. My heart is broken for her husband, their son, and all who knew and loved Halyna.”

Tributes pour in for Halyna Hutchins

Hutchins, 42, had been serving as the director of photography of Rust. She was born in Ukraine and said in a 2019 interview with American Cinematographer that she was an “army brat” who grew up on an Arctic military base. While she started her career as a journalist, she pivoted to filmmaking while working on British film productions in Eastern Europe and moved to Los Angeles to pursue a career in cinematography.

While in L.A., Hutchins met Bob Primes, a cinematographer and two-time Emmy winner who looked over her reel and encouraged her to apply to the American Film Institute Conservatory (AFI). She was accepted and entered the program in 2013; Primes was one of her teachers. “She was one of the most innovative students I’ve ever had there,” Primes says. “To be a successful director of photography, you just don’t do everything perfectly. You’ve got to be right on the cutting edge: inventing, innovating, and doing stuff that you don’t know how to do, but you’re willing to have the courage to do anyway. And she had that in spades.”

At the time, Hutchins was married with a young son. “She was an extraordinarily determined person to begin her career as a working parent,” Stephen Lighthill, the chair of the cinematography program of AFI and the president of the American Society of Cinematographers, says. Lighthill was particularly impressed with Hutchins’ thesis project for the program, the storyline of which dealt with the death of a sibling.

“She was able to take something that could have been quite pedestrian and made it very moody and dramatic,” he says. “Her talent was being able to understand that she needed to link her images not to the toys she wanted to use or techniques she wanted to try, but to communicate the essence of the story.” Lighthill says that a scholarship will be established in Hutchins’ name at AFI.

Recently, Hutchins worked on films including Blindfire, The Mad Hatter and Archenemy, the last of which starred and was produced by Joe Manganiello. “I was so lucky to have had Halyna Hutchins as my DP on Archenemy. She had such an eye and a visual style, she was the kind of cinematographer that you wanted to see succeed because you want to see what she could pull off next. She was a fantastic person,” Manganiello wrote on Instagram on Friday.

In a statement, the movie’s production company, Rust Movie Productions LLC, wrote: “The entire cast and crew has been absolutely devastated by today’s tragedy, and we send our deepest condolences to Halyna’s family and loved ones. We have halted production on the film for an undetermined period of time and are fully cooperating with the Santa Fe Police Department’s investigation.”

Hutchins was the rare woman in a field that is overwhelmingly male. In 2020, just 6% of cinematographers working on the top 250 grossing films were women, according to a recent study. Hutchins described herself as an “adrenaline junkie” on her Instagram, which was filled with images of her on film sets across the world. As the news of her death broke, tributes from the film community poured in on Twitter:

“One thing I learned is that cinematography is not something you do by yourself. It’s a group [project],” Hutchins said in the American Cinematographer interview. You need to develop your own vision, but the key to a successful film is communication with your director and your team.” 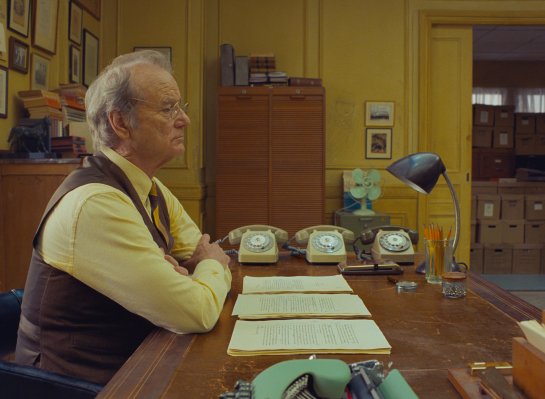 Wes Anderson Overindulges on Whimsy in The French Dispatch
Next Up: Editor's Pick