Inside Netflix's Adoption Documentary Found, and One Genealogy Researcher's Quest to Unite Families

What happens when adopted children reconnect with their birth families? This subject has served as the basis for several extremely compelling documentaries in recent years, including Three Identical Strangers and Twinsters. Joining them is Found, a gut-wrenching new documentary on Netflix from Amanda Lipitz, in which three adopted teens across America discover they are blood-related cousins from China.

As the cousins bond and decide to learn more about their roots, they hire a Beijing-based genealogy researcher named Liu Hao, who quickly becomes one of the documentary’s most riveting characters. The documentary shows Liu spending months traveling across the country in a quest to track down the trio’s birth families and orphanage nannies and confronting her own past as a family outcast. She eventually takes the cousins on an emotional trip across China, serving as their tour guide, mentor and pseudo-therapist all in one.

In a Zoom from Hong Kong, Liu spoke to TIME about her unique connection with the cousins and her big breakthrough at the end of the film. This article contains spoilers for Found.

Researcher Liu Hao, left, became close with three American teenagers she guided on a trip to journey in 'Found'
NETFLIX © 2021

Although Found focuses mostly on the personal journeys of the three cousins, Lily, Chloe and Sadie, it also touches on the historical reason for their adoptions: China’s one-child policy, in which the government mandated that most families only have one child in an attempt to curb rampant population growth. The policy was enforced for more than three decades, with the government imposing fines or other sanctions on families who had additional children, and even in some cases mandating abortions or sterilizations.

The result was many secret abortions, infanticide and babies being abandoned in public places. One farmer in Found says he was unable to pay an $8,500 fine that would allow him to keep his child, so he left her outside a hospital door. Given the often patriarchal nature of Chinese families, baby girls were more frequently sacrificed, leading to the country’s population having one of the highest gender imbalances in the world.

The cousins in Found are three of more than 100,000 children adopted from China by Western families between 1990 and 2015, according to the Washington Post. Liu almost joined their ranks: she says several of her relatives gave up their female babies, and that her parents almost gave her up for adoption to avoid paying the penalty before her grandparents intervened. “It was very difficult for me because you know you are not welcome. You are in the wrong gender, they don’t want you, and you know that,” she says in the documentary.

Given this history, Liu joined the company My China Roots as a researcher two years ago. (She has since moved on.) “I think what they are doing is really interesting because they help people find their past and try to connect them to their culture that they are not so familiar with,” she says.

One of the orphanage nannies featured in 'Found,' who dedicated her career to caring for abandoned babies
NETFLIX © 2021

When Liu was contacted by the cousins in Found, she was especially excited to take on the case given that they were from Liu’s home region: the Western Guangdong province. To track down their backgrounds, Liu put up ads on social media and television, cold-called hospitals and orphanages, and culled through governmental and medical records. Her research led her to several in-person interviews with parents who had sacrificed their babies decades ago and were hoping to reconnect with them.

Through these interviews, Liu revealed an achingly sympathetic side to these parents: they deeply loved their children, but lacked the means or ability to keep them. In one of their wrenching stories, a parent waited until early morning to put a baby on the side of the road, so the baby wouldn’t have to spend too long in the cold. Liu says those conversations were agonizing but ultimately rewarding: “It is very emotional and a very difficult job to handle those parts. But I’m very grateful I can be a part of it, to learn so many people’s stories.”

Liu Hao, second from left, with the cousins Chloe, Sadie and Lily from left in "Found."
Netflix

After searching for months, Liu was ultimately unable to track down the cousins’ birth parents. But at the end of the movie, Liu made a huge discovery: one of the women she interviewed—who owns a clothes shop in Yangjiang and says she gave up three daughters—was a DNA match with another one of Liu’s clients, a teenager named Amanda Phillips. This marked the very first time that Liu had successfully connected a birth parent with their child. “I cannot believe it happened: It’s so unreal for me,” Liu says. “It’s just something that can only happen in a movie or something.”

In the film, the birth mother, who didn’t want to be filmed or identified, expressed guilt and trepidation that her daughter would be angry with her. But Liu says that in the time since, Phillips and her mother have been talking over WeChat using the translate function on the app. Liu says that Phillips has been trying to learn Cantonese and sometimes asks her to help her translate one of her birth mother’s messages; that Phillips was planning to travel to meet her birth mother, but COVID-19 delayed the trip.

Meanwhile, Liu is still in contact with the three cousins at the center of Found, sending and receiving “silly photos” via Snapchat with them. She says that when she watched the documentary, it felt accurate to her experience and her relationship with the girls. “I think it’s a lovely story, and I loved seeing their faces again,” she says. “That Chloe and Sadie and Lily had the courage to come back really inspired me. I think that is a really precious quality they have—and I want more people to have the courage to do something they are afraid of.” 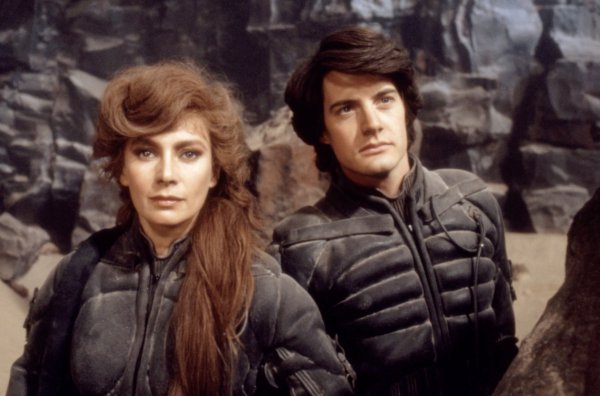 Why Filmmakers From David Lynch to Denis Villeneuve Have Struggled to Adapt Dune
Next Up: Editor's Pick