Colin Powell and the Transformative Power of Owning Your Mistakes

There are plenty of reasons people here in D.C. roll their eyes when someone mentions Aaron Sorkin. The screenwriter and playwright sent a generation of operatives to Washington who believed witty hallway banter was a substitute for reading the footnotes of a whitepaper, who obsessed over clever tactics instead of baseline principles. Sorkin’s versions of Washington, as seen in A Few Good Men, The American President and The West Wing, reduced this company town to a dichotomy of absolute good versus unquestioned evil, morality against depravity and truth against hypocrisy. Without even involving his consistently problematic treatment of female characters, Sorkin corrupted America’s understanding of Washington more than can be quantified in this lifetime.

But—and there always is a but—Sorkin nailed one essential truth about how this town considers influence Late in its run, The West Wing landed a truism about how D.C. measures power. “You think I’m not aware that I’m living the first line of my obituary right now?” asked fictionalized White House chief of staff C.J. Cregg at a late-night dinner near the White House. In that, Sorkin nailed a Washington reality: legacy is defined by the last high-profile line on a C.V., or, more often, one monumental error.

Which brings me to the death of Colin Powell, a legend whose legacy spanned the globe for decades. He broke barriers, made and shaped history and reset the rules for how American military force was—or should be—deployed in the post-Vietnam era. He was, until the election of Barack Obama, the highest-ranking Black individual ever to serve in government, fourth in line to the Presidency as Secretary of State. The four-star Army General also was the first Black man to serve as National Security Adviser, Chairman of the Joint Chiefs of Staff and as State Department chief. He completed the national security trifecta: top adviser, general and diplomat.

To read the coverage today, it’s easy to see Powell as a tragic figure who used his sterling reputation to mislead the world into a war with Iraq. The Washington Post’s homepage called Powell the “first Black secretary of state who struggled with Iraq invasion.” The New York Times’ secondary headline noted he “helped pave the way for the war in Iraq.” The Associated Press headline described him as an “exemplary general stained by Iraq claims.”

Yes, Iraq was always going to be the first line of Powell’s obituary. Powell lent his reputation to building the case for war based on what is now clearly seen as bad information. He later lamented that he was only given a week to go over the intelligence behind the Bush Administration’s decision to remove Saddam Hussein from power and conceded his presentation to the United Nations arguing for that outcome would become a “blot” on his career. “I’m the one who presented it on behalf of the United States to the world,” Powell told Barbara Walters two years later, acknowledging that his 76-minute presentation “will always be a part of my record.”

But Powell was more than that blunder that led to thousands of dead Americans and Iraqis and a stained U.S. legacy as a world leader. He was a fierce advocate for opportunity for immigrants and a steadfast defender of dignity, both here and abroad. His experiences as a first-generation son of Jamaican immigrants who fought in the fields of Vietnam and the corridors of Washington shaped him and his country. In the wake of the Vietnam disaster, he developed a doctrine for the use of American force: deploy it overwhelmingly, but only when all other options are exhausted, when there is a clearly defined win and when the public has the troops’ backs. He never pretended the military was above political pressures. “Anybody who becomes a senior officer had better have some political instincts or you’re going to get ground up,” he told The New York Times in 2007. “We are a political nation. It is not a dirty word.”

Throughout his career, he had a front-row seat to politics and to history, including a stint as the top uniformed aide to future-National Security Adviser Frank Carlucci and Defense Secretary Cap Weinberger. In the meltdown of Iran-Contra, Ronald Reagan recruited Powell to the White House as a deputy national security adviser, and a year later promoted him to the corner suite in the West Wing. Reagan’s successor, George H.W. Bush, promoted Powell to Chairman of the Joint Chiefs of Staff, a position he held during the last days of the Cold War, the successful Gulf War and the botched early days of Somalia that lay blame in Powell’s orbit. His was the advice that kept Bill Clinton from unleashing hellfire on Iraq after its intelligence service had tried to assassinate Bush 41 during a visit to Kuwait.

After Powell’s subsequent early resignation in 1993, he flirted with a run for the White House himself. By then a celebrity general, he drew huge crowds to best-selling book’s signings, landed himself marathon television interviews with the media giants of the day and seemed poised to challenge his one-time boss, Bill Clinton. He was a modern-day Ike, such a threat to Clinton’s second term that some White House advisers considered bringing back into the fold as Secretary of State.

But most of his family was dead set against a possible run. His wife, Alma, had mused publicly and without an ounce of irony what it would be like to watch her husband gunned down. During one private meeting, then-House Speaker Newt Gingrich visited Powell’s home and warned him of the potential personal costs of running, a sentiment echoed during other meetings of Powell’s brain trust. The consideration overlapped with the racially charged O.J. Simpson trial, and days before Powell made his official declaration as a non-candidate, Israeli Prime Minister Yitzhak Rabin was assassinated, a reminder that no political leader can ever be entirely safe.

Powell never led the nation, but he did become a unique figure in American life. In his first go at retirement, he introduced Saving Private Ryan at the Oscars. He broke with his Republican Party to speak in favor of affirmative action and further split with the GOP when he endorsed Barack Obama, Hillary Clinton and Joe Biden for the White House. He was tireless in speaking up for what he saw as America’s moral footing, even in acknowledging his own errors in the wake of the Sept. 11 terrorist attacks.

In the 20 years since 9/11, it sometimes seemed as though Powell was living a maxim made infamous when he uttered it during an extended 2002 briefing to Bush on Iraq: “You break it, you’re going to own it.” Well, Powell did damage his reputation—to some, irreparably. But he owned his grave error, and to even his harshest critics, the dignity of that stood in contrast to the petty politics of the moment. It set him apart from the run-of-the-mill politicians who are cut from the same cloth of self-preservation. Powell never ran for office, and that perhaps allowed him to never need to bend in unnatural ways.

A few weeks ago, on the eve of the Sept. 11 attacks’ 20th anniversary, Powell returned to the Kennedy Center to introduce an evening of music and memorial. He didn’t cover any new ground—in fact, he read the remarks he gave on that day before rushing home from a summit in Peru—but the crowd was transfixed by his cameo. Even in Washington, where one wrong step forever can render someone like Powell a pariah, there was an acceptance that legacies are complicated and seldom can be genuinely reduced to one decision in a chain of history. 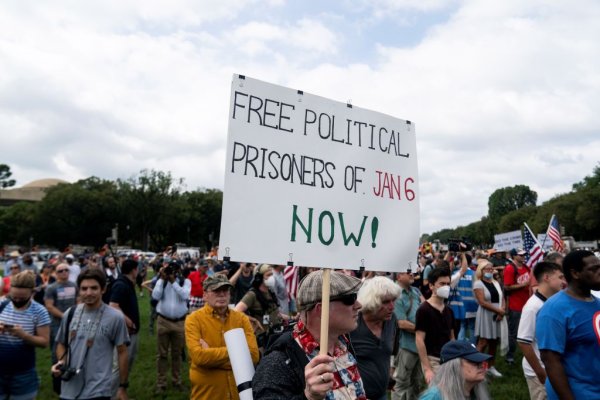 Why It's Critical that Jan. 6 Rioters’ Rights Are Respected
Next Up: Editor's Pick