Ideas
By Mike Duncan
Mike Duncan is a history podcaster and author of the New York Times-bestselling books, Hero of Two Worlds: The Marquis de Lafayette in the Age of Revolution and The Storm Before the Storm: The Beginning of the End of the Roman Republic.

Historians have long observed the links between the natural environment and the fate of civilization. Natural emergencies like droughts, floods and crop failure regularly plunge people into chaos. Long term changes in the earth’s climatic conditions lead flourishing societies like the Roman Empire to wither and fade. But perhaps there is no greater example of the explosive intersection of climate disruption and political upheaval than the period surrounding the French Revolution of 1789.

Starting in the mid-13th century, the northern hemisphere entered a period of prolonged cooling known as the Little Ice Age. This extended chill was not smooth and uniform, however, but marked by intervals of plummeting temperatures in the midst of otherwise stable warmth. Around 1770, one such interval of abrupt freezing began in the Northern Atlantic, wreaking immediate havoc on shipping, transportation and agriculture. In 1775, severe grain shortages in France caused by successive years of poor harvests resulted in bread riots throughout the kingdom. Later dubbed the Flour War, it was a harbinger of things to come.

Compounding the worsening climate, the Laki volcanic fissure in Iceland erupted in June 1783. Over the next eight months, the fissure spewed 120 million tons of sulfur dioxide into the atmosphere. Across northern Europe, a “blood coloured sun” barely showed through a thick persistent haze. In addition to the excess mortality caused by the foul air, the Laki eruption radically altered the atmosphere, causing the climate of the 1780s to become extremely volatile. After a long spell of cooling, the summer of 1783 was suddenly the hottest on record. The unseasonably hot weather triggered severe thunderstorms with hailstones large enough to kill livestock. The scorching summer gave way to an equally extreme winter of severe freezing, followed by a warm spring that rapidly melted the snow and ice which caused extensive flooding.

These abnormally wild extremes defined weather patterns for years to come: dry and blistering summers interspersed by violent thunderstorms, followed by deep winter freezes, snowstorms and sub-zero temperatures. The fluctuations ravaged the lives of the French population, ruining crops, killing livestock and creating an unbreakable cycle of hunger, poverty, stress, fear and hardship. Touring France in 1785, John Adams wrote, “The country is a heap of ashes. Grass is scarcely to be seen and all sorts of grain is short, thin, pale and feeble while the flax is quite dead….I pity this people from my soul. There is at this moment as little appearance of a change of weather as ever.”

Read more: How Climate Change May Be Contributing to Our Political Instability

The damage caused by these weather problems exacerbated an ongoing financial crisis that stalked the kingdom of France in the 1770s and 1780s. The finances of the kingdom had never been well-managed, as the wealthiest aristocratic families in France continued to enjoy exemption from most taxes. With the agricultural devastation and the kingdom’s already insufficient tax revenue, King Louis XVI’s ministers introduced economic and financial reforms to stabilize the Crown’s finances. But these efforts were met with intransigent hostility from the privileged elite, who refused to accept new taxes unless the king offered equally meaningful political concessions. Both sides refused to yield, and deadlock ensured the crisis remained unaddressed.

The years of climatic stress, financial instability and political conflict brutally converged in 1788 and 1789. A severe drought in the spring of 1788 left staple crops crippled and withered. On July 13, 1788, one of the most severe hailstorms in recorded history swept across France. The storm sliced a swath of destruction that pummeled and destroyed fields and vineyards. Grain shortages sent prices skyrocketing, and families who once spent 50% of their income on food now devoted more than 90% of their household budget just to stay alive. With all disposable income going to buy bread, consumer demand for all other commodities cratered, driving the kingdom’s already shaky economy into a recession. Thousands of urban workers lost their jobs and wages, exacerbating the growing social crisis.

Amid the terrible harvests of 1788, the political conflict among the elite over financial, economic and political reform reached a crescendo. The King’s attempts to force changes were met by angry resistance. A population psychologically battered by years of stress and fear were now ready to push the envelope against the policies of an absolute monarchy that did not serve the people. Demands for a national assembly to address the mountain of accumulated grievances grew so loud the king finally acquiesced. In late-1788, King Louis called for the Estates-General to convene the following spring.

Just as Louis announced this momentous concession, France was hit by the coldest winter in almost a century. Thomas Jefferson, America’s then-minister to France, wrote, “there came on a winter of such severe cold, as was without example in the memory of man, or in the written records of history. …[A]ll outdoor labor was suspended, and the poor, without the wages of labor were, of course, without either bread or fuel.” This vicious winter froze an already starving population. The death grip of winter lasted for months. As late as April 1789, the comte de Mirabeau observed in the south of France: “every scourge has been unloosed. Everywhere I have found men dead of cold and hunger, and that in the midst of the week for lack of flour, all the mills being frozen.”

When the Estates General convened in Versailles in May 1789, the population of France had endured long and difficult years battered by endlessly destructive climate fluctuations. The spring and summer of 1789 offered no relief. It would be months before the year’s harvests overcame the shortfalls of the previous year. The traumatized population of Paris, egged on by political orators, were ready to explode. Like many previous summers, the July heat was an oppressively sweltering contrast to the ice-cold chill of the previous winter. Months of ongoing political deadlock in Versailles were finally resolved in July 1789 when rumors of a reactionary conspiracy hit the streets of Paris, and the alarmed and angry population rose to tear down the Bastille, marking the beginning of the French Revolution.

The French Revolution is a particularly dire cautionary tale, as scientists now know that the climate chaos experienced at that time was a result of natural processes, while the warming crisis we are living through today is caused by human actions and—unless we take immediate steps to halt it—will only get worse. The link between climate and political destabilization has become an urgent field of study. A landmark 2013 study comparing climate data to major historical conflicts found “strong causal evidence linking climate events to human conflict… The magnitude of climate’s influence is substantial.” The study warned that as the earth’s temperature rises in the decades to come, “amplified rates of human conflict could represent a large and critical social impact…in both low and high-income countries.” In August, the United Nations released an IPCC report described as “code red for humanity.” The report said that “extreme weather, meager crop yields, and low GDP are also associated with increased violence.”

The French Revolution was not caused by climate disruptions alone. Those disruptions ravaged the economy, destabilized the social order and traumatized the population, but it required a broken political system unable and unwilling to address the effects to tip the scales toward revolution. As we enter a new epoch of a human created climate emergency, we have it in our power to mitigate the ecological consequences, but it will not be enough to simply lower emissions or convert to green energy. We must also ensure our political structures can respond to the inevitable social crises caused by global warming and are flexible and resilient enough to weather the coming storm. 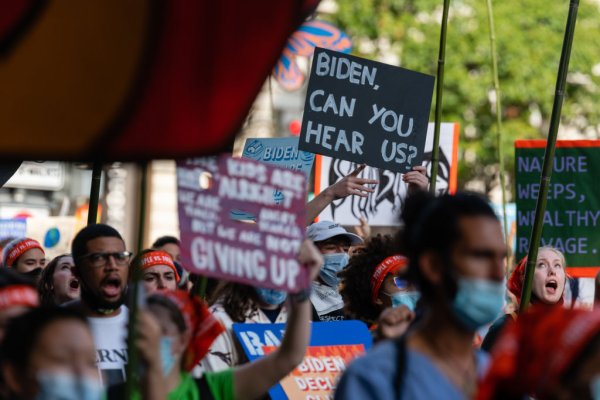