Every day for more than two years now, Hilda Jorge Perez has been on pins and needles, waiting for a call, a letter in the mail or a knock at the door that will determine her family’s fate.

On August 7, 2019, she and her husband Antonio Lopez Agustin were arrested, along with dozens of others, at Pearl River Foods, a chicken processing plant in Carthage, Miss., where they had worked for more than a year. The day marked U.S. Immigration and Customs Enforcement (ICE)’s largest-ever series of workplace raids, and resulted in the arrest of roughly 680 people at seven agricultural processing plants across the state.

Under the Trump Administration, workplace raids like that were hardly uncommon. ICE conducted dozens of similar raids across the country and made the tactic a hallmark of its hardline enforcement policy within U.S. borders. But the Biden Administration has recently switched tacks. On Oct. 12, Department of Homeland Security Secretary Alejandro Mayorkas directed enforcement agencies to stop all workplace raids and, instead, to shift their focus to employers who are hiring and victimizing undocumented workers. “By adopting policies that focus on the most unscrupulous employers, we will protect workers as well as legitimate American businesses,” Mayorkas said in a public statement.

While migrant advocates praised the Biden Administration’s move and heralded a new era of immigration enforcement, many warn that unwinding the effects of years of aggressive workplace raids won’t happen overnight. Immigrant advocacy organizations, as well as business and faith leaders, have long argued that workplace raids stoke fear and distrust in law enforcement and government officials, and can be detrimental to families and communities, which often step in to provide financial support when undocumented parents lose work or are deported.

“[The raids] had a tremendous chilling effect,” says Amelia McGowan, campaign director at the Mississippi Center For Justice and an immigration lawyer who represented some of the families arrested during the 2019 raids. Many immigrant communities, particularly in places like Mississippi where the Trump Administration conducted large-scale raids, harbor an abiding distrust of the federal government. Convincing them that they can now come forward to report exploitative employers is a tough sell.

“It’s going to be very hard for this administration to overcome,” McGowan says.

‘In fear all of the time’

Jorge Perez and her husband are both undocumented, but they have an American-born daughter. To ensure that there was always someone at home to take care of her, they split up their workdays at Pearl River Foods: Jorge Perez worked mornings at the chicken processing plant; Lopez Agustin worked overnight.

On the morning of the raid that changed their lives, their daughter had gone to school for her first day of second grade. Lopez Agustin had an hour left on his shift and Jorge Perez had just arrived to begin hers. She was standing next to the conveyor belt on the plant floor, using a knife to demonstrate to a new employee how to carve up a chicken carcass when a group of people—clearly armed, but not wearing uniforms—entered the plant. One of the men told her to drop the knife and she did.

“We didn’t know who they were,” Jorge Perez tells TIME, in Spanish. “Not until after they took away all our belongings and gathered us all together…and started taking down our information one at a time did they finally say who they were.” They were federal ICE officers, executing a planned federal immigration enforcement raid.

When Jorge Perez was arrested, she panicked. Her daughter was in school, she told the ICE officers, and no one would be there to pick her up. One of the agents told Jorge Perez that her daughter would be safe, but didn’t offer any more information. The male workers, Jorge Perez remembers, were rounded up into a different group so she couldn’t see where they had taken Lopez Agustin.

Jorge Perez was transported to a local ICE facility, where she waited, anxious and humiliated. She was on her period and couldn’t get any of the agents to give a feminine hygiene product. “They’d tell me to sit down and I’d say I can’t, because look at me, I’m all stained,” she remembers.

Meanwhile, after the school bell rang, Jorge Perez’s daughter waited in vain—along with hundreds of other kids across the country that day—for her parents to arrive. Videos of children crying for their moms and dads, who had been rounded up by ICE, went viral and donations poured in to local organizations, including from as far away as Europe, according to Mississippi Immigrants Rights Alliance. Many politicians condemned the raids, while others spoke in support of them.

One of Jorge Perez and Lopez Agustin’s relatives was eventually able to pick up their daughter from school, and took care of her until 10 p.m. when Jorge Perez was released. Lopez Agustin, who was ordered deported, remained in an ICE facility for the next eight months.

Read More: How as a Community Can We Move Forward?’ Uncertainty Lingers After Mississippi ICE Raids

A pro bono lawyer later took on the family’s case, and submitted an appeal to Lopez Agustin’s deportation order, but the family remains in purgatory. The already-glacial deportation process has slowed considerably during the pandemic. In April 2020, Lopez Agustin was allowed to leave ICE detention because he had an underlying heart condition that made him vulnerable to COVID-19, but an immigration judge has yet to make a decision on his case.

Neither Jorge Perez or Lopez Agustin have been able to return to work. A local church is helping to pay their bills, but when that charity runs out, there’s no plan B. They’ve been in the U.S. for nearly half their lives—Jorge Perez for 18 years and Lopez Agustin for 25—and their daughter was born here. They have no choice but to wait for a decision from the federal government.

“I’m in fear all of the time,” Jorge Perez says. “I’m always wondering when they are coming to get me.”

Immigration experts have debated for decades the effectiveness of workplace raids as a tool of enforcement. While they tend to result in an immediate uptick of worker deportations, there’s often no long-term deterrent effect. Because the employers themselves usually go unpunished, many companies simply return to business as usual in the aftermath of a raid—sometimes hiring a new crop of undocumented immigrants just weeks or months later.

“Workers are detained and deported and employers often just get off scot-free,” says Marielena Hincapié, executive director of the National Immigration Law Center. “Or they may get a small fine that they just consider as a cost of doing business.”

Between April 2018 and March 2019, only 11 people were prosecuted for hiring undocumented workers in seven cases, according to the the Transactional Records Access Clearinghouse, a research organization at Syracuse University.

While it has been technically illegal since 1986 for employers to knowingly hire undocumented workers, enforcing that law is easier said than done, says Chuck Mullins, a criminal defense and personal injury lawyer, who represented one of the employers after the Mississippi raids. To be charged with a crime, prosecutors have to prove that an employer knew that a worker was undocumented and hired him or her anyway. But proving that knowledge can be tricky. Employers verify potential hires’ documents using government system called E-Verify, but many undocumented workers use fraudulent papers.

“The employer is going through the verification process that the government has set up,” he says. “Unless there are telltale signs that the employer is just overlooking [citizenship]…they can’t say ‘I’m not gonna hire you because I think you’re illegal,’ because then they run the risk of facing a lawsuit.”

The August 2019 workplace raids were an outlier in this regard. Four employers at the seven processing plants where the Mississippi raids took place were later indicted on an array of charges. Salvador Delgado-Nieves, who worked for Southern Knights Industrial Services as the manager at A&B Inc., a chicken processing plant in Pelahatchie, Miss., pleaded guilty to charges of aiding and abetting the harboring of an undocumented person for financial gain, according to the Department of Justice (DOJ). He was sentenced to two years of probation, according to court documents. Iris Villalon, who also worked at A&B Inc., pleaded guilty to the same charges in May, according to the DOJ. She has not yet received a sentence, according to court documents.

Carolyn Johnson, who also worked at Pearl River Foods as a human resources manager, was charged with six felony counts of harboring, as well as wire fraud and identity theft, according to DOJ. Her case is ongoing. Aubrey Bart Willis, a manager at Pearl River Foods who Mullins represented, pleaded guilty to a charge of hiring and continuing to employ undocumented immigrants, and was sentenced to one year of probation, according to court documents. Attorneys for the other three former employers did not respond to TIME’s request for comment or could not be reached.

Meanwhile, Jorge Perez and Agustin Lopez’s U.S.-born daughter remains in school, where she speaks English and lives an American lifestyle. Jorge Perez worries that if she and Lopez Agustin are deported, her daughter would bear the brunt of the punishment—ripped away from only country she has ever known.

“So many of us have kept this country running,” Jorge Perez adds, referring to undocumented people whose labor was deemed “essential” during the pandemic. “It’s in the hands of the government. It’s up to them to decide if those of us who have been here for years, have homes, have children here, will be able to work without the constant fear of immigration arriving.” 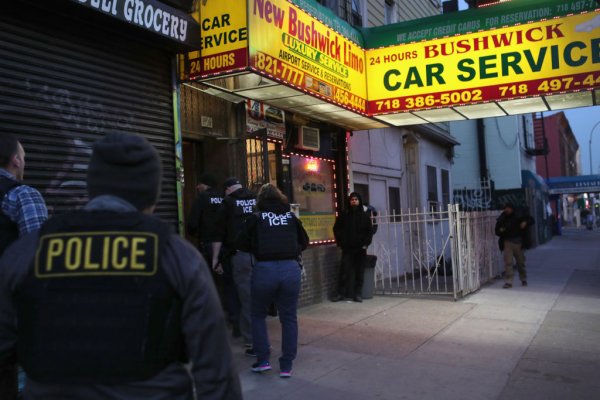