Rep. John Yarmuth listens during a virtual markup in his office on Capitol Hill on Sept. 25, 2021.
Stefani Reynolds—Getty Images
By Philip Elliott

There are a few types of lawmakers in Washington who are reliably popular with the press corps. Former journalists are on the list—folks like Rep. Cheri Bustos or former Vice President Al Gore, who know how to give a savage quote on deadline. Recovering Hill staffers like former House Speaker Paul Ryan are up there, too, because they actually know how Congress works. And the political unicorns—the outliers in state delegations like Kansas Democrat Sharice Davids or Massachusetts Republican Scott Brown—are popular because they know hewing too close to the partisan line will cost them their jobs.

So when news of Rep. John Yarmuth’s retirement at the end of this term landed in reporters’ inboxes yesterday, it hit all three archetypes for the Capitol press corps. A former aide to a moderate Republican U.S. Senator from Kentucky, a founder and editor at two Louisville publications and the lone Democrat in his state’s delegation, Yarmuth has been a much-sought-after voice for years. The eight-term lawmaker has been a loyal lieutenant to House Speaker Nancy Pelosi but also a reliable check on political fads; just ask him about his choice to storm out of the House chamber in 2009 as it held a moment of silence for Michael Jackson.

The news that Yarmuth is planning to head home when this Congress wraps in early 2023 triggered two reactions in Washington. One, D.C. was losing a liberal leader and one of the most bipartisan figures in Democratic Leadership, earning an “A” rating from the aggressively bipartisan Lugar Center for being evenhanded in oversight while wielding the Budget Committee’s gavel. The other was the same question that has been raised by almost all of the 20 House departures announced this year so far: was Yarmuth leaving because rival-party state officials drew him into an unwinnable district?

The answer, at least for now, is no.

The massive redistricting effort underway across the country right now is on everyone’s minds. Each state with more than one House member has to redraw the borders of its voting districts before the next election to reflect the new U.S. Census data released in late September. It’s an exercise based on the fundamental principle that each district in the country is meant to hold roughly the same number of people. People move, and states have to shift things accordingly.

The pandemic delayed the Census’ execution and release, so lawmakers are now scrambling to meet redistricting deadlines—some that stretch as late as Louisiana’s in July of next year. Most lawmakers don’t even know if their current homes will be in the district they’re running for re-election from, or if they’ll have to scramble with a realtor to move before the filing deadlines. So far, 409 of the 435 voting districts have yet to be finalized, according to FiveThirtyEight. Some will be as simple as affirming North Dakota’s state line encapsulates the entire district. Others are trickier—and ripe for hackery.

Overall, the new Census data showed Republican-leaning states were the big winners over the last decade and Democratic-leaning ones were not. Growing—and red—states like Texas, Florida and Montana were adding representation. Shrinking—and blue—states like New York, California and Illinois lost some. And perhaps resetting the definition of swing states, Ohio, Pennsylvania and Michigan also saw their populations shrinking, meaning they will also lose a corresponding electoral vote in the next presidential race. (The Electoral College allocates votes based on congressional delegations.)

The population shifts—coupled with Republican dominance in state governments—leave Democrats at a distinct disadvantage as redistricting gets underway. Republican-controlled legislatures in 20 states have the final word on how new districts are drawn, which will last for a decade. A Cook Political Report analysis notes that there are 187 seats across the country that the GOP can pen however they want. Democrats, meanwhile, have providence over just eight states, or 75 seats. The rest are either going to be decided by independent commissions, split government or in states that are too small to qualify for more than one seat in the House, like Vermont and Alaska.

Even independent commissions are having trouble drawing lines. Virginia voters last year backed a Republican-led ballot measure to move the power to redistrict away from the Democratic state legislature in Richmond, but the resulting nominally bipartisan commission has all but imploded in recent days. Its chair stormed out of a meeting and her seven colleagues may not even produce a report, which would kick the responsibility to the state supreme court. Similarly, in Michigan, the bipartisan negotiators have now taken sharpies to the map 22 times in seven weeks, passing drafts among themselves without a resolution. Four U.S. House district maps are still on the table in a process that one observer called “chaotic.”

In other words, Republicans could redistrict themselves back to a House majority with some basic data analysis and GoogleMaps. Kentucky Republicans, for example, have a veto-proof majority to essentially do whatever they want with the map, despite having a Democratic Governor.

Senate Minority Leader Mitch McConnell is telling his colleagues back home—and many other deep-red places—to show a little restraint. McConnell sees peril in overreach. Sure, slicing up counties can run afoul of laws and norms, but the bigger problem is if courts step in, as they did when Republicans got too greedy after the last Census. Judges agreed that many of the partisan maps drawn after the 2010 Census were patently unfair, and proceeded to invalidate some states’ maps. The ensuing revised maps, drawn by judges or their appointees, cost Republicans seats that would have been safe had they not gotten greedy. In Pennsylvania, for instance, Democrats earned more than half of the votes cast statewide in the 2012 House races but Republicans won almost three-quarters of the House seats.

Still, as I’ve written before, Democrats leading into redistricting after the 2010 Census missed the mark, taking their eyes off the down-ballot races and obsessing over the marquee and expensive races. Republicans, led by former Republican National Committee chair Ed Gillespie, ran the table and drew districts that helped make the Tea Party of that year’s wave sustainable in the next elections. Since then, Democrats have been working fastidiously to elect Democrats to state legislatures. But that’s not as sexy as a U.S. Senate race, even though the state race could have a far higher return-on-investment. So Democratic donors have been plowing cash to federal candidates with big YouTube fundraising pushes over local elections that could determine who the House Speaker is come 2023 for the second half of Biden’s first term.

Democrats may get lucky in places like Yarmuth’s district. But not all states are Kentucky, and even McConnell’s deep political network has its limits. Democrats may find their House majority short-lived to a little more than another year if these maps go in the most partisan ways. And, given many chose to chase the shiny big-headline national figures over the candidates around the corner, they will have no one to blame but themselves. 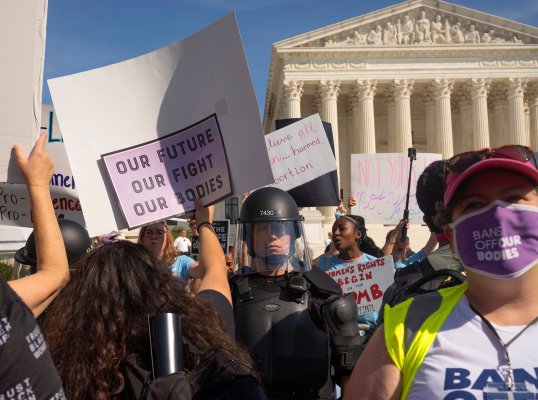 Abortion Cases Are Waning America's Trust in the Supreme Court
Next Up: Editor's Pick