Why William Shatner's History-Making Spaceflight Is Something to Celebrate

You could be forgiven for never having heard of The Butler’s Night Off, an obscure 1951 Canadian film that was a little bit of noir, a little bit of comedy and a whole lot of forgettable. Indeed it would have been forgotten entirely, were it not for a small part played by a 20-year-old actor whose character name was simply listed as “a crook” and whose real name, as posted in the credits, was Bill Shatner.

The Butler went nowhere. Shatner went, well, everywhere. Today he went to space—flying a popgun suborbital mission aboard a Blue Origin New Shepard spacecraft that took off at 10:50 AM EDT and carried him and three other passengers 100 km (62 mi) up, giving them about three minutes of weightless sight-seeing. Looking fit and happy both before and after the flight, Shatner is now the oldest person ever to leave the planet. It’s a career milestone that is not necessarily a capstone, because after 70 years in the public eye, he has given no indication that he intends to retreat from it. If all of that isn’t enough to make you irrationally—even a little goofily—happy, then check your joy at the door, because you just don’t know how to have fun.

Shatner is one of those twinkly, winking, self-aware personalities—a man who’s too talented not to be taken seriously but too attuned, too centered to take himself that way. It’s a quality he shares, ironically, with Buzz Aldrin, a real-world star traveler who once did what Shatner used to pretend to do every week—set foot on another world—but at 91 will still wear stars and stripes socks and suspenders over a t-shirt that reads “Get your ass to Mars.”

A similar you-do-you approach to his celebrity always made Shatner a tidy fit for the iconic role of Captain Kirk, commander of Star Trek’s USS Enterprise. It was a show whose stories were told with candyland colors and spaghetti western dialogue—and viewers liked all that just fine. “It’s a mystery and I don’t like mysteries,” Kirk said about the unexplained death of some of the Enterprise’s crew members, in the first televised episode of the series, which aired on September 8, 1966. “They give me a bellyache, and I’ve got a beauty right now.”

Over the course of the three years that the series aired and the string of Star Trek movies that followed it, beginning with 1979’s Star Trek: The Motion Picture, Shatner and Kirk grew together—but they never strayed far from the understated but unashamed campiness that defined the character and the series. The very fact of his aging with the role made Shatner more appealing. He seemed indifferent to the jokes about his rumored hair pieces, his increasing Care Bear shape and his often Shakespearean line readings. “All toupees by now,” The New York Times wrote in a one-line review of one of the later Star Trek films; if fans noticed, they didn’t seem to care.

That was as much a credit to Shatner as it was to the stories that Star Trek trafficked in, especially in those three seasons it was on the air, when it fit itself, key in lock, into the national zeitgeist. That first 1966 episode aired in the golden era of the space race, when America’s two-man Gemini spacecraft were flying, and its three-man Apollos—the great ship that took astronauts to the moon—were coming out of the factory. Indeed, just four days after the debut episode, on September 12, 1966, Gemini 11 launched on a three-day journey commanded by astronaut Pete Conrad, a man known for his wry, Shatner-like wit. Conrad later walked on the moon during the Apollo 12 mission, and when I asked him, years later, if his time on the lunar surface wasn’t shadowed at least a bit by the fact a single malfunction would leave him marooned there, he answered simply: “Nah, I was a happy guy on the moon.” It was a cowboy sentiment that could have easily been expressed by Kirk.

But the original Star Trek series was about more than space; it was very much a weekly lesson in current events, a series whose stories had moral weight and played for mortal stakes. Shatner’s history-making interracial kiss with African-American actor Nichelle Nichols, who played communications officer Lieutenant Uhura, occurred in an episode that aired on November 22, 1968, just months after the assassination of the Reverend Martin Luther King, Jr., which saw cities put to the torch in race riots that swept the nation. In a country that was in the thick of an escalating war in Vietnam, Star Trek’s writers would make regular mention of Starfleet’s “prime directive”—the rule that no crew of any starship should ever meddle in the affairs of any other civilization they might visit. What the U.S. government was getting grievously, bloodily wrong, the make-believe universe in which Star Trek unfolded was getting right.

It was that history, that legacy—both his own and that of the series—that Shatner carried to the launch pad this morning and then into space. “This is like nothing I’ve ever experienced before,” he was heard saying over the air-to-ground communications link during the three minutes he spent in weightlessness. It was something his character, of course, experienced regularly, and viewers experienced by proxy. Now, 90 years on in his own Earthly journey, Shatner has touched space for real. In a small way, so have the rest of us. 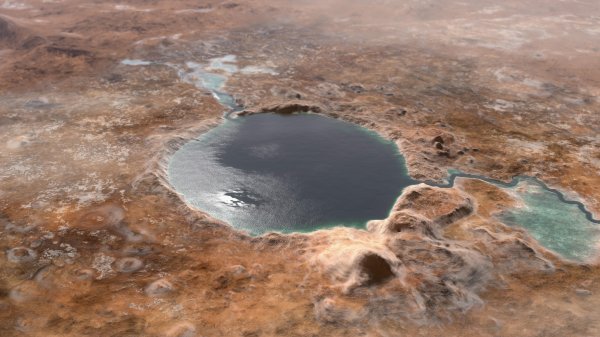 Boulders On Mars Suggest a Warm and Humid Past
Next Up: Editor's Pick