The Philippine Elections Will Be a Test of Rodrigo Duterte's Legacy

Nobody has dominated the Philippine political landscape in recent years like President Rodrigo Duterte. But as jockeying begins in earnest for presidential and vice-presidential elections in May 2022, there are signs that the onetime strongman has become a liability.

Limited to a single presidential term under the Philippine constitution, Duterte had intended to stand for vice president but the plans drew a sharp backlash, with critics accusing the instigator of the country’s bloody drug war of wanting to hold on to power.

One survey showed that the majority of Filipino voters thought his election gambit was unconstitutional. Another revealed that he was no longer the most popular bet for vice president. His administration’s performance ratings slid in the last quarter too.

On Oct. 2, Duterte seemingly bowed to the inevitable, withdrawing his vice-presidential plans and announcing his retirement. But October is only the start of the Philippine election season, and the wily Duterte has announced retirement plans before—in 2015, only to win a landslide victory in presidential elections a year later. He certainly has every motivation to stay in high office: It would grant him ongoing immunity from prosecutions arising from the drug war, currently the subject of a probe by the International Criminal Court, or his botched handling of the COVID-19 pandemic.

Read More: Inside One of the World’s Longest COVID-19 Lockdowns

All eyes are therefore on his next move. In the current geopolitical climate, the outcome of the Philippine leadership race matters. The country of more than 109 million—a former U.S. colony—occupies a strategic location on the southeastern rim of the South China Sea and has been assiduously courted by Washington and Beijing. Its many sea ports, economic potential (it just reported its fastest growth in 30 years, even amid the pandemic) and young population (nearly 30% of whom are aged between 10 and 24) make it a choice regional ally.

But as Duterte sets himself up to be either king or kingmaker, some observers believe he is losing his touch, and many of his influential friends are turning their backs on him.

Philippines' President-elect Rodrigo Duterte (L) stands beside boxing icon and newly elected Senator Manny Pacquiao (R) at a meeting in Davao in southern island of Mindanao on May 28, 2017.
MANMAN DEJETO/AFP via Getty Images

The election arena may be tougher than Duterte anticipated, says Richard Heydarian, a political science associate professor at the Polytechnic University of the Philippines. A pre-election survey in September, from local pollster Pulse Asia, showed that Vicente “Tito” Sotto III, a conservative TV personality and the current Senate president, would have led the vice-presidential race by a huge margin against Duterte, had the latter stood.

“I think Duterte’s looking at the lay of the land and seeing here that the balance of forces is actually working against him,” Heydarian tells TIME. “The writing on the wall is saying that he’s increasingly a liability if he runs himself.” Heydarian suggests that Duterte would be better off focusing “on mobilizing resources and leveraging whatever popularity he’s going to hold on to” to help an anointed successor.

As the only Philippine president to have maintained his popularity way beyond the usual honeymoon periods, the incumbent certainly has some political capital and must be hoping his legacy will rub off on his daughter, Sara Duterte-Carpio. Currently leading public opinion polls, even though she is not a candidate, Duterte-Carpio is well placed to be a proxy. But she is currently mayor of the Philippines’ fifth most populous city Davao, and for now has said she will be gunning for a third term of mayoral office instead of joining the presidential race.

Read More: Photographers Reflect on the Most Powerful Images of the Philippine Drug War

Two Duterte cronies have announced vice-presidential and presidential candidacies respectively. They are Senator Christopher “Bong” Go, Duterte’s long time aide, and Senator Ronald dela Rosa, who, as the Philippine National Police chief until April 2018, was Duterte’s drug war enforcer. But Duterte could be in for a reality check.

“We thought Duterte would have it [in the 2019 senatorial elections],” political analyst, and former dean of the Ateneo School of Government, Antonio La Viña tells TIME. “It turns out his endorsement power is also zero.”

The same Pulse Asia poll reveals a continuing political shift: only five people backed by Duterte were found to have mass appeal as senators in the 2022 race, compared to a similar 2018 poll where eight politicians he endorsed were among the top senatorial bets.

“Approval ratings as president do not translate into voting for you,” La Viña says. “Because you’re no longer the candidate for president.”

A dog is seen with placard as Filipino protesters attempt to march towards Philippine Congress to call for an end to Duterte's presidency on July 26, 2021 in Manila, Philippines.
Ezra Acayan/Getty Images

The Marcos family—the clan of the former dictator and kleptocrat Ferdinand Marcos—is meanwhile fielding its own candidate. The Marcoses have been friendly with the Dutertes in two previous elections, and it was Duterte who gave the remains of the disgraced dictator a hero’s internment in 2016. But if Duterte does manage to arm-twist his daughter into running for the top job, she will be up against Ferdinand Marcos Jr., who enjoys strong support in his family’s traditional power base in the north.

Aside from them, opposition leader Leni Robredo, former national police chief Panfilo Lacson, and actor-politician Francisco Domagoso, have thrown their hats into the presidential ring. None of them has so far promised a continuation of Duterte’s policies, which may have sealed the fate of his vice-presidential ambitions.

Heydarian believes Duterte is Machiavellian and capable of an eleventh-hour plot twist: “He makes his decision constantly based on the shifting of balance of forces on the ground.”

For La Viña, Duterte is done. “He has been checkmated, to be honest.” But then there are seven months to go to the polls, and that, as they say, is a long time in Philippine politics. 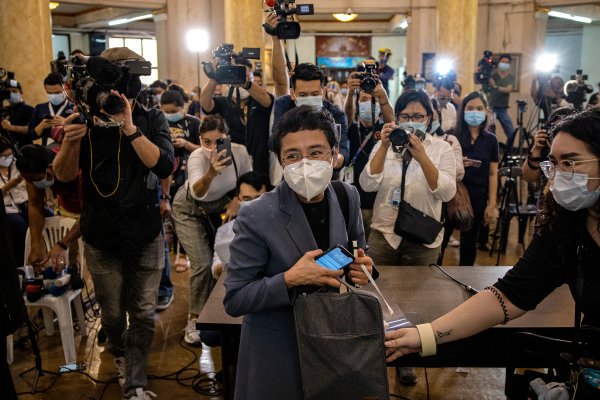 What Maria Ressa's Nobel Prize Means for Filipino Reporters
Next Up: Editor's Pick