A team of nurses and a respiratory therapist work with a patient in the ICU Covid ward as a doctor masks up at the Medical Center of Aurora on Tuesday, May 27, 2020.
AAron Ontiveroz—MediaNews Group/The Denver Post via Getty Images
By Tara Law

Growing up in Somalia’s capital of Mogadishu, where people sometimes die of preventable or treatable illnesses like diarrhea, typhoid and malaria, taught Abdifitah Mohamed a painful lesson: adequate health care is indispensable. In 1996, Mohamed’s mother died of septicemia after spending nine months hospitalized for a gunshot wound. Her death, Mohamed says, inspired him to go to medical school, and for about four years he worked to treat the sick and injured in Somalia, Sudan and Kenya.

But Mohamed hasn’t been able to work as a doctor since 2015, when he left for the United States, where his wife emigrated in 2007. Before moving, Mohamed believed that being allowed to practice in the U.S. was a simple matter of passing the United States Medical Licensing Examination (USMLE)—a three-step exam for receiving a U.S. medical license that tests medical knowledge, principles and skills—and then completing a medical residency. However, he didn’t expect that after spending thousands of dollars to apply to 150 residency programs, none of them would give him a chance.

“I was aware that I had to take the exams—and that’s something everyone will agree with,” Mohamed says. “But I was not aware that I would not get a chance for an interview.”

Now, a new program in Washington state, where Mohamed lives, could soon put him back to work. In May, Washington governor Jay Inslee signed a law granting internationally-trained medical graduates the opportunity to obtain two-year medical licenses to work as doctors, with the possibility of renewal. Participants can forgo residencies—one of the most arduous steps in becoming a doctor—but must meet certain other requirements, including English proficiency, passing all three steps of the USMLE, and working under the supervision of a fully-licensed doctor. According to the Washington Medical Commission, about 40 internationally trained doctors are lined up to apply for the program starting this month. Experts say the program could serve as a model for other states to launch their own similar efforts, opening a pathway for some of the estimated 270,000 unemployed or underemployed workers with foreign health care training currently living in the U.S. to work in their field.

International medical graduates have long struggled to obtain U.S. medical licenses, but the current political moment could lead to lasting changes, says Jeanne Batalova, a senior policy analyst at the Migration Policy Institute. The COVID-19 pandemic has exacerbated existing shortages of doctors, nurses and therapists as people burn out amid the strain. Meanwhile, demand for doctors is expected to expand as the overall population ages—the American Association of Medical Colleges recently estimated that the U.S. could be short 54,100 to 139,000 doctors by 2033, noting that 40% of current practicing physicians will be over 65 within the next decade, while the country’s population of people over 65, who tend to require the most medical care, is expected to grow by 45% in that timeframe. That’s left U.S. officials and lawmakers scrambling to reach untapped talent, including those living here with medical skills and knowledge they gained abroad. While Washington is implementing the largest-scale permanent program to clear foreign doctors to work stateside, governors of six other states have issued emergency executive orders that similarly seek to help internationally trained doctors to get to work.

Many immigrants and refugees face obstacles to working in U.S. health care that have nothing to do with their ability or training, says Dr. José Ramón Fernández-Peña, the president of the American Public Health Association and the founder and director of the Welcome Back Initiative, which assists immigrants who want to work in medicine. Most crucially, even doctors who have already worked in the medical field for years and passed the USMLE also need to complete a residency, which are meant to give newly minted doctors hands-on training. In part, he blames the “not very logical” situation on protectionism. “Some of the processes to relicense these individuals are apparently rooted in concern for the public’s safety, but when you look closely, some are rooted really in turf protection,” he says.

When foreign-trained doctors try to go through U.S. residency, as Mohamed has, they often find it especially difficult to get accepted into the highly-competitive system. Nearly 40% of non-citizen international medical graduates failed to match with a hospital for a U.S. residency program in 2020, compared to just 6% of domestically-trained graduates, according to the National Resident Matching Program. Jina Krause-Vilmar, ​​president and CEO of Upwardly Global, a non-profit that assists immigrant and refugee professionals pursue their careers, says that residency program size limits lead hospitals to shut out many internationally trained doctors. Such programs often prefer applicants who graduated from medical school more recently than many international medical graduates seeking a match, and many such applicants lack sufficient U.S. clinical experience. Additionally, while U.S. medical schools are enrolling more students, residency programs have not kept pace, according to the Association of American Medical Colleges, making the competition for placement even fiercer.

Supporters hope Washington’s program will help alleviate some of the stress felt by those already in the field. Micah Matthews, deputy executive and legislative director for the Washington Medical Commission, which is in charge of issuing the temporary licenses, says that his agency has seen an uptick in complaints about doctors’ conduct during the pandemic—a sign, he says, that many are burned out. “Whenever someone gets tired and worn out, they are more likely to say something they probably wouldn’t have said,” says Matthews. “We hope that the international medical graduates would be able to alleviate some of that strain, and prevent more folks from, say, retiring early or choosing to leave the profession of medicine entirely.”

There are other good reasons to welcome more international medical graduates into the American health care system: many have insight into other cultures, speak multiple languages, and are often people of color. Dr. Mohamed Khalif, a Somali-born and Chinese-trained doctor who founded the Washington Academy for International Medical Graduates, an activist organization that helps doctors return to the health care workforce, and spearheaded the effort to pass Washington’s new law, led a separate effort to employ foreign-trained doctors in jobs where they can utilize some of their skills, including roles in health education. Foreign-trained doctors frequently end up working in low-paying jobs without any relationship to health care—Khalif, for instance, worked as a security guard and in a pie factory despite having a medical degree and speaking five languages. Like other foreign-trained doctors who spoke with TIME, Khalif says that it’s his goal to serve those who are often left behind by the U.S. medical system. “At the end of the day, it’s people who have a lack of access who get hurt, especially people of color, immigrants, and people who speak different languages,” says Khalif.

For Abdifitah Mohamed, watching how severely the pandemic has hit immigrants, people of color, and essential workers has only sharpened his sense of urgency to go back to work. Washington’s program, he says, is “really a gift from God. Because at least I [will be] able to wear my lab coat, to help my community, my people.” Before Mohamed can apply, however, he must be sponsored by a hospital or clinic that is willing to oversee him while he has his temporary license (clinics are currently in discussions with program organizers). But Mohamed says that he’s ready to fight the pandemic. He’ll be especially pleased, he says, to tell his two American-born daughters, who are four and two, that he’s back in the field.

“They always ask me one question: when are you going to be a doctor? I still cry when I hear that question, because I don’t have an answer for that,” he says. “I cannot wait for that day that I will wear my lab coat and I will see my first patient.” 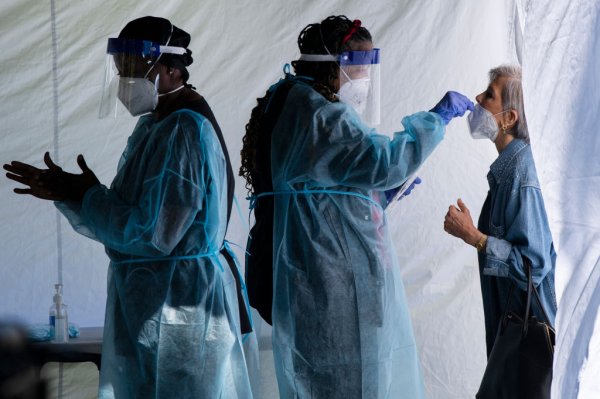 COVID-19 Pushing Prices Up But Impact Should Fade
Next Up: Editor's Pick