By Olivia B. Waxman and Video by Joey Lautrup

About a twenty-minute walk from the Liberty Bell in Philadelphia, in a city of sites dedicated to heroes of the American Revolution, there’s a tribute to a hero of the city’s LGBTQ+ community at the Philadelphia FIGHT community health center. It’s dedicated to Kiyoshi Kuromiya, a gay civil rights activist and co-founder of the Gay Liberation Front movement’s Philadelphia chapter who revolutionized the way HIV/AIDS patients got reliable information about the virus.

The center’s Critical Path Learning Center is a free computer lab for HIV/AIDS patients. It’s named after the “Critical Path Project,” a pioneering newsletter and 24-hour hotline that Kuromiya managed, providing reliable information about the HIV/AIDS and treatment in the earliest days of the Internet in the 1980s and 1990s.

Read More: On World AIDS Day, Those Who Fought the 1980s Epidemic Find Striking Differences and Tragic Parallels in COVID-19

Kuromiya was born May 9, 1943, in the Heart Mountain Relocation Center, a Japanese-American incarceration camp in Wyoming. At the age of two, his family moved to Monrovia, Calif. He remained on the West Coast until college, when he moved cross-country to attend the University of Pennsylvania in Philadelphia. There, he had a political awakening. Che Gossett, a postdoctoral fellow at Columbia University who is writing a book about Kuromiya, said he would later refer to himself as the “Forrest Gump of activism” because he was involved in so many different movements.

He participated in civil rights protests, and in March 1965, traveled to Montgomery, Alabama where he was beaten unconscious while participating in the Selma to Montgomery march—he had to get 20 stitches in his head, according to a June 17, 1997, interview with Marc Stein, creator of the Philadelphia LGBT History Project. He was also an ardent anti-war demonstrator. In April 1968, he posted fliers inviting UPenn students to the university’s Van Pelt Library to watch a dog being burned in a protest over the use of napalm (which was deployed widely during the Vietnam War). When more than 2,000 outraged and curious students showed up, they found a flier that read: “Congratulations on your anti-napalm protest. You saved the life of a dog. Now, how about saving the lives of tens of thousands of people in Vietnam.”

In the early 1980s, as the AIDS virus was beginning to devastate the gay community, Kuromiya re-focused his activism around AIDS patients’ rights. As one of the founders of the AIDS advocacy group ACT UP, he co-wrote its first standard for care for AIDS, the first document of its kind. In a 1994 Philadelphia Inquirer profile, the paper described him as “the city’s most knowledgeable layman about HIV.”

And Kuromiya was early to see the benefits of the potential of online newsletters for getting more life-saving information on HIV/AIDS treatment to patients in real time. “You didn’t have to wait for the next journal to come out in the month; you could get on the very day… the information that might be the difference between your surviving another month or not,” says Chris Bartlett, who met Kuromiya through ACT UP Philadelphia in 1990 and is now the Executive Director of the William Way LGBT Community Center, home to Kuromiya’s archives—conference materials, scientific articles, newspaper clippings he collected about HIV/AIDS.

In addition to helping people stay safe with HIV/AIDS, he worked to safeguard relevant information from online censorship in a culture where anti-gay, conservative forces were trying to do just that. In 1996 he participated in one of the court cases that led to the overturn of sections of the Communications Decency Act aimed at blocking “patently offensive” material online. In his testimony, Kuromiya argued it could lead to the censorship of sexual information necessary to help curb the spread of HIV/AIDS. “I don’t know what ‘patently offensive’ means in terms of providing life-saving information to people with AIDS, including teenagers,” he told a panel of federal judges.

Kuromiya also took care of AIDS patients. “In the days before there was really any treatment, [he] was doing on an ad hoc basis what we would call hospice care now,” says Jane Shull, CEO of Philadelphia FIGHT, who met Kuromiya at an ACT UP meeting in the late 1980s. And his activism was personal. He found out he was HIV-positive in 1989, and died on May 10, 2000, at the age of 57, from complications of AIDS, according to a New York Times obituary.

His diagnosis had only emboldened him to work towards destigmatizing HIV/AIDS. Explaining why he was so focused on his work to Philadelphia LGBT History Project creator Marc Stein in their 1997 interview, Kuromiya said simply: “I really believe that activism is therapeutic.” 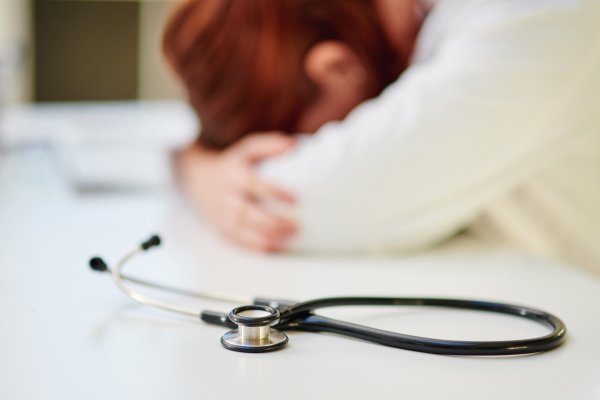 How COVID-19 Opened the Door to a New Era in Psychedelic Medicine
Next Up: Editor's Pick