Refugees carry supplies at a Tutsi refugee camp in Gisenyi, Rwanda on the border with Zaire on June 24, 1994.
Scott Peterson—Liaison
Ideas
By Mondiant Dogon
Dogon is the author of Those We Throw Away Are Diamonds: A Refugee's Search for Home

In August the United States withdrew from Afghanistan, leading to hundreds of thousands of Afghans being forced from their homes by violence. These Afghans join the millions displaced worldwide in this year alone, and they join the more than 82 million people–refugees, asylum seekers and internally displaced – who make up what many call our modern-day “refugee crisis.”

I am one of those 82 million, part of a worldwide family connected by loss and displacement. I fled my home because of war. I am also part of another group, one that is often ignored and forgotten and that includes hundreds of thousands of Afghans displaced decades ago. For 25 of my 28 years, I lived in what the United Nations refers to as a “protracted refugee situation”–defined by the UNHCR as when 25,000 or more refugees of the same nationality are in exile in the same country for five or more years–and what I call a “forever refugee.”

Read More: Inside a Wisconsin Army Base Where Nearly 13,000 Afghans Await an Uncertain Future

For the millions of forever refugees, the crisis lasts for decades. Sometimes it lasts our entire lives. Sometimes it begets new life; between 2018 and 2020 about 300,000 children were born in refugee camps a year. Yet almost all refugee policy ignores the needs of refugees living in protracted refugee situations, acting on the myth that refugees are a short-term problem to be met only with emergency care.

I was born in the North Kivu province of the Democratic Republic of Congo, then Zaire, in 1994. When I was 3 years old, violence from the Rwandan genocide spilled over into my country and my family, who are Tutsis, were attacked by both Rwandan Hutus, who were strangers, and Congolese Hutus, who had been our neighbors. We fled and I became a refugee.

Violence followed us from our village as we made our way to Rwanda. We survived attacks in the forest where we tried to hide and hideous massacres that killed thousands inside of refugee camps where we thought we were safe. In 1996 my family arrived in Gihembe, a camp in the hills of northern Rwanda that had been established by the UNHCR for Congolese Tutsis. There, we were given food, water and shelter. We were told to feel safe. One of my first happy memories of childhood outside of Congo was eating the sweet vanilla cookies given to us by aid workers and playing with my shadow inside tents glowing with sunlight.

From the beginning, our goal was to return to Congo. Without aid or government workers telling us otherwise, we assumed that life in the camp was temporary. But days turned into weeks, weeks into months, and months became years. Improvements were slow and small–one year a mud and straw wall replaced a tent flap, the next we would be given a chalkboard for school in place of hanging paper. Progress and even survival often depended on our own resourcefulness. Well-meaning aid workers could only give us enough food to help prevent us from starving. Well-meaning politicians in Kigali passed laws meant to help refugees get educations or jobs outside of the camp, but they were not successfully implemented, in part because of an impenetrable stigma surrounding refugees and in part because of our relentless poverty.

Read More: The U.S. Offered My Family a Home After the Vietnam War. It Must Do the Same for Those Fleeing Afghanistan

Tragedy follows refugees. Many children in Gihembe died of water-borne diseases. Women lost babies because they were too malnourished to nurse them. People suffered from anxiety and depression that ended in suicide.

But much of the tragedy of the forever refugee is invisible. Although images of our life in Congo before the violence grew into fantasies in our heads, we never talked about why we left. While Rwanda began a campaign to face the genocide and offer healing through local courts called gacaca, refugees were not given the same chance to talk about our trauma. Healing, in a refugee camp, became impossible. I was a child when I arrived in Gihembe, and it took me 10 years to lose all my hope; my parents lost their hope much faster. But they never talked about it. And, eventually, the world lost interest as well.

A child born in the early days of Gihembe is now 25 years old. A very small percentage the refugees I grew up with had the means to continue their education outside of the camp, and only a few of us were able to attend university in Kigali. I am the only refugee I know from Gihembe who left the camp for an education, and my exit, funded by a private donor who is now as close to me as my own family, is not easily replicated for other refugees. Some people I grew up with, including my parents and two of my siblings, have been resettled outside of Rwanda. But most of my loved ones remain in a refugee camp, and with the recent news of Gihembe’s closure and the relocation of refugees to a new camp on the border, those loved ones worry they will have to start from scratch.

When tragedy strikes, nations and humanitarian organizations are needed to host and to help those fleeing. The new Afghan refugees immediately need what my family needed when we fled Congo in the 1990s, and what other Afghan refugees needed 40 years ago: food, water, shelter and safety.

Read More: Finding Home: A Year in the Life of Syrian Refugees

But the tragedy of the protracted refugee situation requires different action. Host nations must pass and implement policies that truly allow refugees to integrate into society and to receive an education and employment. Stigma against refugees–as those who take, rather than give–must be actively and systematically fought by host countries. Repatriation, which has long been the stated preference of aid organizations and host countries, cannot be the goal when returning home, to Afghanistan or to Congo, is so clearly impossible.

Our invisible pain must be recognized and treated. Aid organizations and host countries can help identify our trauma and depression and encourage us to talk about it and receive treatment. In 2014, while I was still living in Rwanda, I founded an organization that traveled from camp to camp collecting stories from women and girls who were refugees. Very often, those stories involved rape and sexual assault and very often we were the first people those women had revealed their stories to. They told me that it was a relief to finally talk about it. And we later learned that in the wake of that work the rate of sexual assault within the camp and outside of it had declined significantly.

Refugees need to be given a voice. We need to be given the chance to tell our own stories, to have an opinion and to feel some agency within the country we are living. We need hope that one day we will receive citizenship and freedom to travel. We need to be involved in the decisions that affect us. Without these changes, and without the recognition of protracted refugee situations as a unique problem requiring complex solutions, every displaced person risks becoming a refugee forever. –Written with Jenna Krajeski 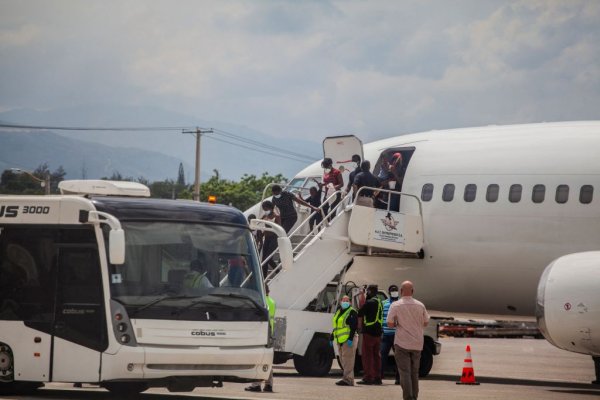 Promised U.S. Aid to Haiti Has Yet to Arrive
Next Up: Editor's Pick