During the COVID-19 Meltdown, Execs Pocketed Millions in Bonuses While Their Companies Went Bankrupt

Members of P.A.I.N. (Prescription Addiction Intervention Now), Truth Pharm, and a coalition of survivors and advocacy groups working in response to the overdose crisis held a demonstration outside of The United States Bankruptcy Court in White Plains to call out the United States justice system for allowing the billionaire Sackler Family to walk away unscathed after igniting one of the worst public health care scandals in the history of the nation.
Erik McGregor—LightRocket/Getty Images
By Philip Elliott

The last time Congress made a major change to bankruptcy laws in 2005, legislators cleverly inserted a provision that barred troubled companies from tucking executive bonuses into the books right as they were skidding through bankruptcy unless a judge signed-off on the paycheck.

The thinking was pretty straightforward: the execs at the wheel during their companies’ crash shouldn’t get lavish payouts while creditors were, at best, going to get pennies on the dollar for their debts. Back then, in 2005, the memory of Enron’s 2001 collapse was still fresh and the enduring populist rage about the 2008 Wall Street bailout was on the horizon. Almost two-thirds of Americans thought income inequality was an unfair feature of the American system back then, and back-door paydays were roundly loathed.

The vote passing the changes wasn’t close: 302-to-126 in the House and 74-to-25 in the Senate. Republicans controlled the House, the Senate and the White House and, at least in those days, didn’t have many qualms about the broader package that made it harder for individuals to discharge their personal debts through bankruptcy. (Critics, rightfully, called it a perk for banks and credit card companies who could chase debtors further and with more claw-back power.)

Well, the law is still on the books, including the part about nixing big bonuses after bankruptcy, though it’s not clear whether anyone really bothers to heed it. A report quietly released last week from Congress’ main watchdog found that in the fiscal year that ended on Sept. 30 of last year, about 7,300 companies filed for bankruptcies as the COVID-19 pandemic was in its first act. Of those, 70 asked courts for permission to give retention or inventive bonuses to keep leaders in their roles or to make hitting benchmarks to rebuilding sweeter. Judges agreed.

Seventy companies may seem like a small number, and it is. But we’re still talking about a grand total of $571 million to more than 16,600 leaders at companies that were—or are—in deep, deep trouble, according to the Government Accountability Office. The average bonus was roughly $701,000; the top bonus was $13.3 million. And that was just what came after the companies went to court looking to have their debts eliminated. In the before window, other companies shoehorned in $165 million in pre-bankruptcy bonuses, adding to the companies’ debts as is legally permitted. In fact, 42 of the 70 companies also gave those retention bonuses in the last five months of pre-bankruptcy operations. One such bonus came two days before declaring bankruptcy.

Why should anyone outside the depths of Chapter 11 of the IRS Code care? This finding fits into a larger problem many Americans see as endemic to our society: that government systems are rigged in favor of the powerful and against the rank-and-file. Right now Congress is considering enormous—and still very fluid—spending bills, and lawmakers are looking to tap into some of that sense of populism to pay for them. In fact, talk of taxing the rich and making billionaires pay their fair share is no longer the punitive rhetoric of revolution but pretty standard fare on left-wing gab fests. (Republicans, predictably, say such moves punish success.)

Though it’s tempting to dismiss this as a liberal fever dream of both of Bernie Sanders’ presidential bids, one can credibly read a deep distrust in the system as part of Americans’ DNA at the moment. Consider this finding, published last year by the Pew Research Center: in the two years immediately before the pandemic shuttered much of the global economy, the share of Americans who said hard work and wealth were related dropped by 12 points, while the share who said wealth was the result of systemic advantages rose by 13 points.

Real or perceived, the rigged landscape is one that politicians in both parties cannot ignore. In the same survey, a full 50% of Democrats under the age of 30 said billionaires are bad for the country. And among all adults, a full 58% were neutral on the merits of billionaires’ existence—making them an easy target because they have no real defenders right now. After all, it’s tough to defend the super-rich whose wealth surged during the pandemic, often on the backs of workers.

In this environment, it’s easy to spot the inequity in just about every inch of our lives. The pandemic laid bare the public-health and economic disparities in this country between the haves and the have nots. A reckoning on race and gender showed how much ground America still has to cover. And the headlines of the business section now have been stitched together with legal filings to paint a picture of corporate America taking care of its own. We had all heard about court-approved bonuses for five execs at bankrupt Purdue Pharma, totaling $7.1 million last year. You couldn’t miss the $16 million in bonuses Hertz paid to keep its management team in place as it drove into bankruptcy last year. Heck, even the collapse of RadioShack came with bonus rage.

So as Congress considers Biden’s agenda, it’s also worth considering the backdrop beyond Washington. The frustrations with inequality of all stripes is genuine. And dossiers like the one the GAO released last week only reinforce the sense that not everyone is playing by the same set of rules. 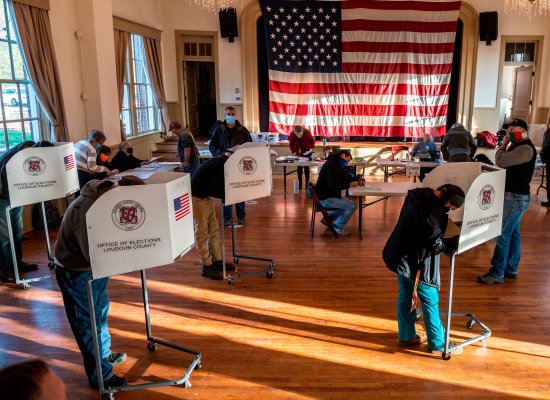 Surprising Data Shows Political Letter-Writing Still Gets Out the Vote
Next Up: Editor's Pick