Ideas
By Ryan Hampton
Hampton is the author of Unsettled: How the Purdue Pharma Bankruptcy Failed the Victims of the American Overdose Crisis.

After two years as a representative of OxyContin’s victims in the Purdue Pharma bankruptcy, I’m finally breaking my silence. I served as a co-chair of the Unsecured Creditors Committee inside the case, appointed by the DOJ. I was supposed to advocate for the people who were harmed by Purdue’s blockbuster opioid painkiller. Instead, I learned how profoundly broken the bankruptcy system is, and why we never should have hoped it would render the justice we deserved.

Most people imagine court the way it’s depicted in the movies. There’s a judge and a jury. The single bang of a gavel settles everything. Good wins and justice is done. Bankruptcy court is nothing like this. The process can stretch over agonizing years while creditors fight over the settlement. In September 2019, Purdue Pharma—the maker of OxyContin and a company controlled by the infamous billionaire Sackler family—filed for bankruptcy to protect itself from 2,600 lawsuits for its role in fueling the U.S. overdose crisis through the misbranding and reckless marketing of their flagship product, OxyContin.

Throughout the case, victims had to vie with the claims of major corporate interests—like insurance companies and hospitals—and even state governments. Victims weren’t taking on Purdue. We were set up to fight every other party with a claim to Purdue’s billions, most notably state attorneys general. We were the most deserving and the least protected in this fight. It should be no surprise that we got the short end of the stick, while billions of dollars went to state coffers already flush with unspent funds earmarked for addiction recovery services and programs. The Purdue bankruptcy was the only mechanism for victims to receive any sort of justice from a company that created so much death and destruction to actual people. The “prevention” services the states take claim for in the settlement is not the same as compensating for past harm and injuries to human beings destroyed by OxyContin.

The bankruptcy was not a trial. It was not just, nor was it a public hearing of the facts of Purdue’s crimes. It was a series of meetings with teams of highly skilled lawyers, their clients, and Judge Robert Drain of White Plains, New York. The 130,000 victims with claims against the company were at a disadvantage from the very beginning. Many of us hoped to be first in the settlement—as the people actually harmed by OxyContin. Instead, we were last. We got $750 million (only 7.5% of the total settlement), which is a fraction of what we deserved to compensate for years of illness, family loss, and death. Assessed at a sliding scale, victims will receive an average of $5,000 per family. That amount wouldn’t ever cover the costs of addiction treatment, funerals, or meaningful medical care. It is an insulting figure, especially to the people who lost their loved ones to overdoses.

To add insult to injury, we were also told that the Sacklers would walk away practically scot-free and unscathed from the case. Every state attorney general knew from the beginning that the Sackler family was seeking a third-party release, freeing them of any civil liability moving forward for their role in the overdose crisis. They would never face another civil suit or be held to any shred of meaningful accountability related to opioids. The third-party releases were pre-negotiated with a majority of government creditors as a part of the Sackler’s terms before Purdue even entered bankruptcy court. In July of 2021, the outspoken attorneys general of New York and Massachusetts signed onto the deal, leaving no room for any other options.

While victims were forced to negotiate for every dollar we were owed, it was with this knowledge that we were set up for an unfair resolution to the case. Even after Judge Drain issued his ruling on September 1, some state attorneys general are now appealing the decision, saying that the Sacklers’ third-party releases were unfair. At this point, these appeals feel purely symbolic. Every party in the bankruptcy knew these releases were part of the settlement from day one, dating over two years ago. Since the releases require the Sackler family to fund a substantial contribution of $4.5 billion to the settlement, without their contribution, and if the appeals are successful, the victims’ miniscule settlement goes from $750 million to $0 overnight. The terms that were set forth between the majority of states and the Sacklers before Purdue filed for Chapter 11 eliminated any possibility of justice for those harmed by Purdue and the Sacklers.

All of these deals and deliberations happened behind closed doors. If those of us who witnessed this gross miscarriage of justice did not speak up, the bankruptcy would settle in silence. This system is broken. It is sick. And it must be changed. Currently, there is some legislation, including the the Nondebtor Release Prohibition Act of 2021, sponsored by Sens. Elizabeth Warren, Dick Durbin, and Richard Blumenthal, as well as Reps. Jerry Nadler, Carolyn Maloney, and David Cicilline addressing bankruptcy reform—but it does not specifically addresses the extraordinary direct harm that victims experience in bankruptcy venues by placing victims first. Sadly, government interests come before victims. That’s wrong. It’s counter to the ethos of the United States, which is supposed to protect the individual from being taken advantage of by the government and big corporations. Victims should come first. Instead, we’re last—when, without our suffering, our deaths, and our outrage, none of these other parties would even have a seat at the table.

It is too late to make things right for Purdue’s victims. However, we can begin reforming the bankruptcy system before the next mass tort bankruptcy of this type, where actual people have suffered irreparable harm. The ripple effect of the Purdue bankruptcy will have a significant impact for many other similar cases if rapid changes are not addressed. We can make individual claims a priority and acknowledge that our suffering is more important than a billion-dollar company’s quarterly returns. We can make sure that bankruptcy laws are accountable to the people, not the lawyers who do business in their courtrooms—and not offer third-party releases as a sure bet for families like the Sacklers. And we can prevent the dehumanizing tragedy of Purdue Pharma from ever happening in this country again. Without this reform, we will not have justice—the justice we deserve, as survivors of corporate greed. 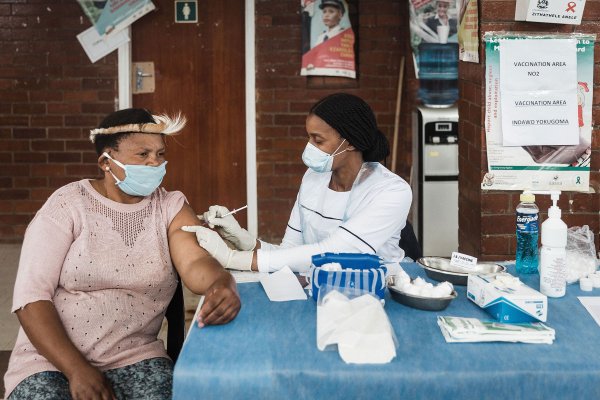 Charlize Theron and Darren Walker on How to End Global Vaccine Inequity
Next Up: Editor's Pick