Suspect in Kansas City Shooting Thought to Be White Supremacist

This photo provided by 41ActionNews, shows Frazier Glenn Cross, who is accused of killing three people outside of Jewish sites near Kansas City, April 13, 2014
AP
By David Stout and Charlie Campbell

Three people were killed when a gunman targeted users of a Jewish community center and residents of neighboring retirement community in the Kansas City suburb of Overland Park on Sunday.

A retired doctor and his 14-year-old grandson were shot dead before the assailant fled the scene and opened fire minutes later at nearby Village Shalom, a residential community, killing a woman.

The shooter was later detained near an elementary school and was booked under a believed alias, Frazier Glenn Cross, on charges of first-degree murder, according to the Associated Press. The gunman reportedly yelled “Heil Hitler” as he sat in police car after being arrested.

Officials have been cautious in identifying the shooting as a hate crime. “As you might imagine we are only three hours into this investigation,” said Douglass. “There’s a lot of innuendo and a lot of assertions going around. There is really very little hard-core information.”

However, the Southern Poverty Law Center (SPLC), a civil rights advocacy organization that follows hate groups, identified the suspected gunman as a 73-year-old white supremacist well-known in the state and the former “grand dragon” of the Carolina Knights of the Ku Klux Klan, a paramilitary organization.

Miller previously served three years in a federal correctional facility on weapons charges and for conspiring to assassinate the founder of the SPLC. He has a long history of intimidating minorities, stockpiling weapons and organizing extremist militia groups.

The suspect is also known to have financially supported and written more than 10,000 posts for the Vanguard News Network, an openly anti-Semitic outlet whose founder has openly called for the extermination of the Jews.

Miller’s attack outside the community center came as it hosted a rehearsal for a production of To Kill a Mockingbird and auditions for “KC Superstar,” a singing competition for high school aged students from around the city.

“We were all very scared. People were calling their loved ones and some of the children didn’t know what was going on, but the ones that did were definitely very scared,” Jenessa Watkins, who was inside the community center when the shooting occurred, told CNN.

The Obscenity of Anti-Semitism

“I’m just very grateful to God that no one inside the building was hurt. But my heart really goes out to the families of the victims.”

Speaking at an Easter prayer breakfast Monday, President Barack Obama said the killings had cast a pall over the Jewish holiday of Passover, which began Monday. “Nobody should have to worry about their security when gathering with their fellow believers. No one should ever have to fear for their safety when they go to pray,” he said.

“As Americans, we not only need to open our hearts to the families of the victims, we’ve got to stand united against this kind of terrible violence, which has no place in our society. And we have to keep coming together across faiths to combat the ignorance and intolerance, including anti-Semitism that can lead to hatred and to violence.” 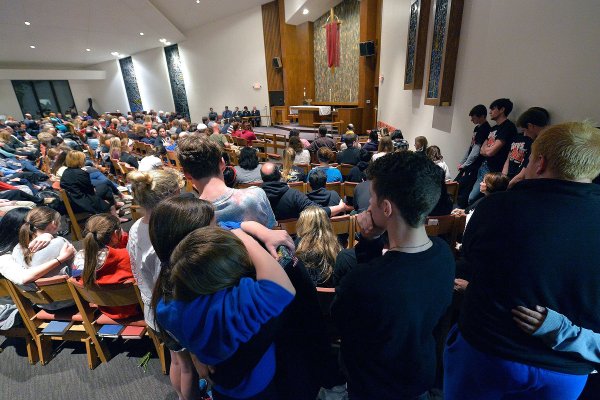