Including Housing Voucher Funds in Democrats' Reconciliation Bill is the First Challenge. Getting Landlords to Accept Them is Another

A homeless man sleeps under an American Flag blanket on a park bench on September 10, 2013 in the Brooklyn borough of New York City.
Photo by Spencer Platt/Getty Images
By Abby Vesoulis

The only thing that’s clear after a week of Democratic infighting on Capitol Hill over a proposed $3.5 trillion social spending package is that lawmakers will have to trim hundreds of billions—if not trillions—from their final bill in order to get critical support from moderate Democratic Senators Kyrsten Sinema of Arizona and Joe Manchin of West Virginia.

Among the many options for potential cuts is a proposed $75 billion for America’s largest tenant-based housing assistance program: Housing Choice Vouchers. While affordable housing advocates applaud the $75 billion recommendation—it would be the largest-ever increase in funding—the discussion underscores a central problem with the existing system: there’s a critical shortage of affordable housing units where people can actually use their vouchers.

The existing Housing Choice Voucher program provides 2.3 million households with vouchers that they can use to offset the rent on private market units. That’s nowhere near enough: only one in four people who qualify for federal housing assistance currently receive support, according to the left-leaning Center on Budget and Policy Priorities (CBPP), and those who do must wait an average of 2.5 years before receiving a voucher.

The new $75 billion would address that part of the problem. The proposed funds would provide roughly 750,000 more vouchers, serving an estimated 1.7 million more people—potentially increasing the reach of the program by a third. But a more systemic, and perhaps more intractable problem remains: once families get vouchers, they often struggle to find landlords who will accept them.

It’s a challenge that 55-year-old Nina Rochelle Moore knows all too well. Since first becoming a voucher recipient in 1997, she says she’s struggled so often to navigate the red tape involved with finding a landlord willing to accept her voucher that she and her family have experienced temporary bouts of homelessness more than a dozen times. When she finds a landlord who will accept her voucher for a six-bedroom unit, the leases are often short term—two years or less. Over the years, Moore says she has rented units that subsequently failed inspections, presented safety risks, or were sold by their owners, all of which have conspired to force Moore and her family to move out and start the search for housing over again multiple times.

This year is no different. Moore says that her local public housing authority (PHA), which is responsible for facilitating the federal voucher program, recently told her to vacate her family’s current rental in Rockville, Maryland by Oct. 3. She says edict came after months of non-communication from the PHA over whether Moore had completed her recertification documentation which is required to finalize a new lease. (Moore provided TIME with email receipts indicating she submitted paperwork for recertification in early March. Moore’s PHA told TIME via email that there were “many aspects” of her situation that were “squarely in the purview of personal accountability and responsibility,” but declined to provide further context.)

Moore isn’t confident that she and the PHA can complete the documentation required to issue her a new voucher—and then find a landlord to accept it and go through needed inspection processes—in the unknown amount of time before an eviction notice is posted to her door. “All I did was wait five months for y’all to tell me I gotta move in two weeks,” she says.

A sign advertising apartments for rent is displayed in front of an apartment complex July 8, 2009 in San Francisco, California.
Photo by Justin Sullivan/Getty Images

‘We don’t have anywhere to go.’

In theory, landlords would want to accept vouchers—a promise from the government to pay, via the local PHA, the difference between 30% of the voucher holder’s income and the market-rate of their rental unit. But landlords say the guarantee of partial payment is not enough to endure the yards of bureaucratic red tape. They complain about the long lead times it takes between showing a tenant an available unit, going through the mandatory inspection process, making any needed repairs, and obtaining final PHA sign-off.

“By the time the voucher recipient gets through all their hurdles, and we get through all our inspection hurdles, I could have already had the place rented,” says Steve Vogel, a 63-year-old landlord in Jackson County, Missouri who owns more than 20 rental properties, and has never successfully rented to a voucher holder despite multiple attempts over his 12 years in the industry. “It’s just too slow.”

“What they need to do is make the voucher look a lot more like cash,” he adds.

According to a 2018 Urban Institute study, the problem spans across the country. Of the 341,000 rental ads the think-tank scoured in five cities, only 8,735 units were available and met the voucher program requirements. The rate at which landlords agreed to accept a hypothetical voucher varied by city. In Fort Worth, Texas, 78% said no. In Los Angeles, 76% refused to take vouchers. Washington, D.C. and Newark, New Jersey—places with explicit laws banning discrimination against voucher holders—still had rejection rates of 15% and 31%, respectively.

Moore is aware of her slim chances of finding another affordable property that is big enough for her family and in an area where her special needs grandchild receives support services—much less a landlord willing to accept her rental voucher.

As a stopgap measure, Moore asked her PHA to require the landlord to provide her a 45-day extension before asking her to move out. On Oct. 1, she discovered that her landlord will neither accommodate an extension, nor give her a positive tenant recommendation to help her find a new property. She’s currently working on a relocation packet to be issued a new voucher by the PHA, but she says this requires her filling out with extensive documentation of financial and utility information, signatures of multiple parties—including her landlord’s—and attending an informational session. Until then, she can’t begin the process of applying to new homes. “We don’t have anywhere to go,” she says.

But if Moore’s struggles are hardly uncommon among voucher recipients, affordable housing advocates argue that more federal funding will at least begin to address some of the problems at hand.

Rep. Maxine Waters, chair of the House Committee on Financial Services that is recommending the large outlay be included in the package, says that the challenges some voucher holders face isn’t reason enough to not give more people the opportunity to try, which is why she’ll push for housing to be a priority in the budget bill. “People have been standing in line for about two or three years,” Waters told TIME. “I think they should be given a chance to get a voucher and to go out and look.” 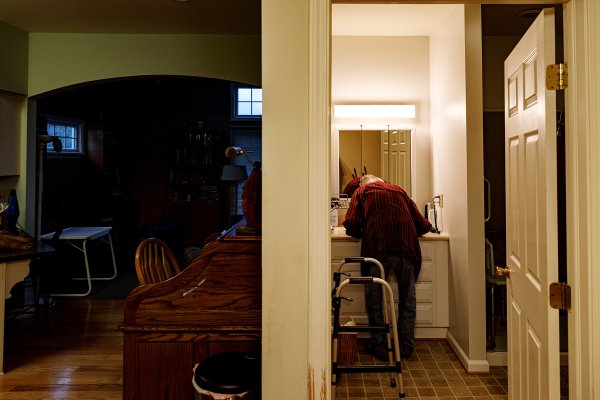 The Battle Over Funding for At-Home Care
Next Up: Editor's Pick