U.S. Fishermen Are Making Their Last Stand Against Offshore Wind

A few hundred yards south of the fishing boat docks at the Port of New Bedford in southeastern Massachusetts, workers will soon start offloading gigantic turbine components onto a wide expanse of gravel. Local trawlers and lobster boats will find themselves sharing their waterways with huge vessels hefting cranes and massive hydraulic jacks. And on an approximately 100-square mile patch of open sea that fishermen once traversed with ease, 62 of the world’s largest wind turbines will rise one by one over the ocean waves.

Known as Vineyard Wind, the project is set to be the first-ever commercial-scale offshore wind farm in the United States, generating 800 megawatts of power, or enough to power about 400,000 homes. Dozens of other offshore wind projects are in development up and down America’s east coast. But some in the fishing industry, including many New Bedford fishermen, are concerned that the turbines will upend their way of life.

Earlier this month, a coalition of fishing industry associations and fishing outfits, including 50 New Bedford fishing boats, filed a lawsuit against several U.S. agencies, including the Bureau of Ocean Energy Management (BOEM), which approved Vineyard Wind in May, alleging that they violated federal law in allowing the project to go forward. The fishing groups frame that fight as a matter of survival, a last ditch effort to slow down a coalition of banks, technocrats and global energy companies set on erecting multi-billion dollar projects that they worry could devastate their livelihoods.

Money is certainly a big issue for many of those behind Vineyard Wind—backers like Bank of America and J.P. Morgan have pledged about $2.3 billion in funding for the project, and they’re looking for returns on that investment. But there’s also a societal imperative to push ahead with such projects, with many green energy proponents saying there is little choice but to get offshore turbines built as soon as possible if the U.S. is to have any chance of meeting its obligations under the Paris Agreement and averting the worst effects of climate change. The Biden Administration is counting on such turbines to produce about 10% of U.S. electricity by 2050, and in coastal, population dense states like Massachusetts and New York, leaders view sea-bound wind farms as a lynchpin of their net zero ambitions.

Read More: Biden Is Pouring Billions into Offshore Wind Energy. Will It Be Enough?

Fishing industry interests have long been opposed to offshore turbines elsewhere in the world. In France, for instance, fishermen helped sink an early offshore wind project back in 2004. In the U.S., however, much of the early opposition to offshore wind came from wealthy homeowners opposed to turbines that they thought would mar their ocean views. (A coalition of Cape Cod residents led an effort championed by billionaire businessman Bill Koch and the late Senator Ted Kennedy that, after years of legal opposition, in 2017 helped torpedo what might have been the U.S. first major offshore wind project, known as Cape Wind.) Many subsequent offshore wind leases were extended in waters farther offshore, where turbines would be out of sight of land. Beachfront homeowners could rest easy. Instead, fishing interests worried about hits to their business became offshore wind’s primary opponents.

Some of those fishing operators have been fighting offshore wind long before Vineyard Wind was approved. Scallop fishers on New York’s Long Island, for instance, sued BOEM in 2016 over a proposed wind area lease that they said would hurt their industry. A federal judge dismissed the case the following year, saying that the project still faced years of federal review before anything would be built. Other proposed projects have caused concern for fishermen in North Carolina and Maryland, while a planned 1.1 gigawatt wind farm off the coast of New Jersey has worried some fishers, though the project is largely steering clear of traditional fishing areas. This March, 80 lobster crews in Maine held a boat protest over the planned construction of a single floating wind turbine off the state’s Monhegan Island.

“It’s gonna mess with the ocean and our way of life,” one fisherman told NBC’s local affiliate. “This one off Monhegan, I truly believe, is the foot in the door to get more than one out there.”

In Massachusetts, the fishing advocates who sued BOEM say that the federal government ignored their requests for more rigorous scientific study of offshore wind turbines’ effect on fishing, as well as their concerns over wind turbines making it harder to traverse to fishing grounds, among other grievances.

“This project is really important because it is the first one,” says Annie Hawkins, executive director of the Responsible Offshore Development Alliance (RODA), the coalition suing the federal government. “We need to make sure that the government and the offshore wind industry aren’t just paying lip service to other ocean users.”

Representatives from BOEM and Vineyard Wind declined to comment on the case. Claire Richer, director of federal affairs at the American Clean Power Association, a green energy trade group, pushes back at the notion that local fishing interests were left out of the planning process, citing the fact that millions of acres were cut out of Massachusetts’s wind energy lease area in large part due to fishing industry concerns. In 2019, wind energy developers in the region also changed the orientation of their turbines in order to make it easier for fishing boats to traverse between them, alterations that the companies say cut about 30% of the future wind farm’s potential generation capacity, though an upgrade to newer, more powerful turbines made up the difference.

“The offshore wind industry has made an effort to be a good player, and has made a lot of compromises in this space at the request of fishermen,” says Richer. “There’s momentum that might have caught some folks by surprise. But there has been a process, and there’s been some real changes made.”

That development momentum has been largely caused by rapidly shifting political realities. Under the Trump Administration, Vineyard Wind was stalled for months. Emails released under an E&E News Freedom of Information Act request showed that BOEM was prepared to make a decision on the project starting in 2019 before the administration delayed it for more than a year, along with the rest of the country’s planned offshore wind projects. And after Joe Biden was elected, the outgoing administration issued a legal memo designed to make it especially difficult for wind developers to get a leg up on fishing interests in the federal approval process. But after Biden was inaugurated, federal policy on offshore wind snapped back. New Interior Department officials issued their own memo to cancel out the Trump Administration’s brief, while the new administration pushed hard for rapid offshore development, pledging in March to have 30 gigawatts of wind power installed off U.S. coasts by 2030. Its first approval, for Vineyard Wind, followed soon after.

That new speed reflects the urgency of an accelerating climate crisis. The U.S. is running far behind other nations in efforts to build out offshore wind power, and faces a rapidly shrinking window of time to decarbonize its still largely fossil fuel-powered electricity sector. Fishing industry representatives say the current administration is overemphasizing offshore wind in decarbonization efforts when it should be pushing more into other renewable energy options. But in some sense there isn’t much choice but to build out large amounts of offshore wind as soon as possible. Clean-energy experts say other renewable energy sources, like land-based wind turbines and solar fields, often run into vehement political opposition of their own, and in many cases offshore wind is one of the only realistic options to provide renewable power for densely populated shoreline states.

Moreover, concessions to the fishing industry, like wind area reductions and turbine arrangement changes, may result in less energy production and higher costs, says Alison Bates, an environmental studies professor at Colby College who researches interactions between offshore wind and local communities. The fact that fishermen have traditionally been primary users of coastal waters, she adds, doesn’t mean they have a right to block projects that would benefit others.

“The oceans are commons—they don’t belong to the fishermen,” Bates says, referencing an economics term used to describe natural resources from which all citizens are supposed to benefit. “We as a society have an equal share in what happens in ocean space.”

Read More: This Vermont Utility Is Revolutionizing Its Power Grid to Fight Climate Change. Will the Rest of the Country Follow Suit?

There’s another broad issue with the fishing industry’s demands: Before turbines go in the water, fishermen want more research into how offshore wind installations could affect their livelihoods. But the unfortunate reality is that the climate clock for such investigations may have already run out—at least with respect to these first early offshore wind projects.

“For us to collect all of the information that we need, we’re going to be so far into this climate crisis that it’ll—I mean it’s already irreversible,” says Bates. “The amount of emissions reduction that we need to get to to even stabilize and have anything that even resembles the world today in the future, it’s dramatic, and we don’t have time.” Erin Baker, the director of UMass Amherst’s Energy Transition Institute, says we’re better off moving ahead with building offshore wind farms and then studying what happens, and make necessary adjustments for subsequent projects. “We’re never gonna learn what we need to learn if we don’t get started at least putting some offshore wind in the water,” she says.

As for the hundreds of families in New Bedford and other ports south of Cape Cod that rely on fishing, the immediate effects of building Vineyard Wind might not be devastating: the impact will be “moderate,” according to BOEM’s environmental impact statement, potentially making it harder to access some fishing areas, for instance, or causing losses of fish populations. But the report warns such impacts are likely to get much more severe if other proposed offshore projects in the area end up being approved and constructed. Still, offshore wind industry representatives have insisted that their industry can coexist with traditional fishing, pointing to concessions like transit lanes between turbines and plans to hire local fishing boats to help collect data on wildlife and warn away potential trespassers.

Fishing representatives are skeptical that such programs will provide the employment they need, and many fishing families may look askance at the idea of giving up a trade often passed down through several generations for the chance to become ocean-faring security guards. But as ocean temperatures rise due to climate change, many fishing families’ traditional way of life may be threatened whether offshore wind moves in or not, especially in the waters off New England, which are warming faster than anywhere else in the U.S..

Climate change has given fishing workers an impossible choice: Either fight offshore wind while bracing for a warming climate, or embrace an encroaching industry that’s part of the climate solution. Baker, of UMass Amherst, says that the huge overall societal benefits of offshore wind are clear, and that climate change will ultimately hurt fishermen vastly more than would offshore wind development. But for fishermen, it’s hard not to see the skyscraper-sized towers and long, swinging blades of offshore turbines as the more visible and immediate threat to their way of life. “There is always going to be conflict between offshore wind and commercial fishing,” says Hawkins of RODA. “They are, in some sense, mutually exclusive.” 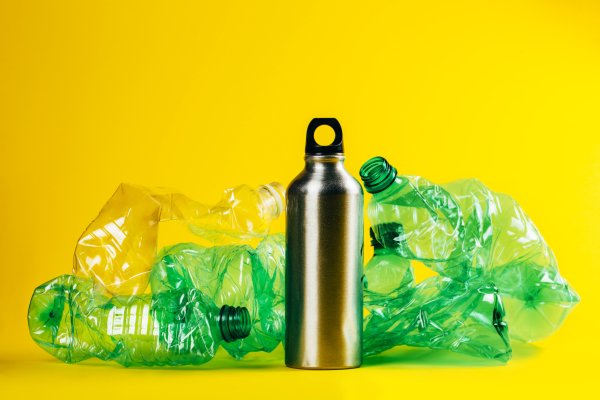 Is Reusable Packaging Actually Better for the Environment?
Next Up: Editor's Pick