For nearly three decades, Pulitzer Prize-winning poet Tracy K. Smith has used her craft as a way to frankly ask the questions that have intrigued her the most about our world. Her poems, which delight in humanity’s sprawling yet thrilling range of emotions—love and grief, desire and rage, joy and hope—often find the political within the personal, beckoning readers to engage with their own curiosities about the narratives they’ve been told about racism, power and justice.

Smith’s inquisitive wonder is on full display in Such Color: New and Selected Poems, releasing on Oct. 5. The book, which pulls from four earlier works in addition to 18 new poems, comes in the wake of both the pandemic and a national reckoning with structural inequality, a time ripe for both reflection and emotion—two elements that added to the urgency Smith felt as she wrote.

“Poetry can reveal to us what we know, and what we need to know in the moment,” the former poet laureate told TIME. “And that’s the relationship to the art form that I’ve found myself in, in this past time, this recent time.”

Smith’s body of work has never shied away from uncomfortable truths, making her a prescient voice for this moment. Her searing 2018 volume, Wade in the Water, explored the long and violent history of slavery, and more broadly, racism in America. But within the sweeping overview of Smith’s body of work and her new poems in Such Color, it’s apparent that an inquiry for truth isn’t the only thing Smith desires. Her poems are marked by an insouciant sense of hope, something she sees as a necessity in these times.

Ahead of Such Color’s release, Smith spoke to TIME about her writing process, finding joy, and why poetry is a necessity.

Has it been hard for you at all in the past year, where there has been such an enormity of emotions to express how you feel as a poet?

I think it was one of the most difficult, unbearable years that I can remember, to be really honest. Much of it had to do with the public sphere that we are a part of. But I think some of the tensions and anxieties, particularly around questions of racial justice, got into the inner sphere in ways that were a bit surprising to me. Talking about what needs to change in small contexts like the workplace—it was exhausting. But I felt a sense of hope. I felt that I could clearly see there were people in my community that I felt capable of helping and advocating for. Doing that work involved going to battle in some cases, and feeling, in other cases, like a target for some of the resistance and backlash. So yeah, it was a hard year. I’m grateful that my family made it through with health and safety. But the poems that I wrote over the last year bear witness to the extreme trauma that comes with a realization like that.

So during this time, what was the role that poetry played in your life? Did it shift from what it has been for you in the past?

I think that it definitely shifted. I’m always sitting down to write because there is a question or a sense of unrest that itches. And I felt that way, but I didn’t feel what I have often felt, which is an intellectual distance between myself and that question. Maybe over the last four or five years, or six years, now, the distance has gotten a lot smaller.

I have always felt as a poet that when I’m writing, I’m listening. And I often think, ‘Oh, I’m listening for the unconscious mind to begin to do its work more loudly.’ But this year, I started meditating. I felt and feel that I’ve been able to engage in what feels more like a dialogue with something that is not myself. In many cases, to me, it felt like a sense of lineage or ancestry. The poems that I was writing were an extension of that dialogue, and were about saying, ‘Okay, I know, you’ve been through something like this—help me. How do I keep going? What do I need to know? What do I need to remember? What do I need to see and hear differently than I have in the past?’ And that’s very different for me. To be honest, that feels closer to prayer than any creative practice that I’ve engaged in, in the past.

You’ve written a great deal about grief and whether or not we realize it, I think we’re all very much collectively grieving right now. How do you think that poetry and even just writing around grief can help us make sense of that?

Grief is many, many things, right? Part of it is deeply personal and part of it is collective and moving between those different realms is important in healing or moving through grief. It’s important in finding different vocabularies for naming what has been lost. That seems important now.

I know that my sense of community has shifted over the last year. There are friendships that have been so sustaining and conversations that have run through this entire time that have given me hope, insight and different kinds of strategies for keeping going. I hope we can begin to do that in larger communal spaces. What would it feel like if we could get to a place as a nation, where we could recognize that all of us, no matter who we are, are grieving pieces of the very same thing? That might be really radically important.

Your poetry has always dealt with a lot of uncomfortable truths about America’s history and our past and very present issues with racism and injustice. Why do you think that we need poetry or art that engages with these issues?

I think one reason is we need to engage with it, you know, we, as a culture, have gotten so good at ignoring it, imagining that it’s been resolved, and that if there is a problem, it’s very far from where we are; in general, that’s a fallacy that we need to deal with. We fool ourselves when we imagine that history has this reach of it, or the uses of it are finite. A lot of my writing this year has alerted me to the fact that I wish to write from a way that is centered in conscious allegiance to Blackness. I’m speaking to that community. And I’m also hoping that what I say can be useful, or even chastening, to people who are outside of that community of Blackness.

In your section of new poems, the riot section, I felt a deep sense of urgency. How did the reckoning with structural racism in the wake of last summer shape your new work in Such Color?

I mean, it is an urgent situation that we’re looking at. And, you know, the crisis of racial injustice was just one of many crises that kind of flared into plain view over the last year. We see that the health crisis is amplified by questions of racial inequity, we see parallels between the way that our human presence on the planet and the devastating effects of that reveal a sense of overarching dominion and disregard that is not so far away from the disregard that causes certain populations to overlook the needs and rights of another. It feels urgent to me and I don’t even feel like we’re in the wake of this uprising. I think we’re in the throes of it and have been for a long time. And we will be for a long time unless we start to feel the urgency of it in new ways, and figure out how to act.

Your poetry doesn’t flinch when telling the truth about violence and trauma and grief. But there’s always this inherent sense of hope and joy. Why is it important to you to maintain that in your poetry?

Lately, it feels like, is a future even possible? That’s the question, but all of those things—joy, humor, and the hope that a future might be possible—have long existed to sustain communities of people who are imperiled in some way. Not as an escape, but as a way of saying, you and your body and your story, matter. That you are vital, necessary, and you are loved in some way. And that’s a way of keeping going. I think about the way that humor works in African American culture, and in art and history and everyday life, I think it operates in a similar way. It’s hard out there. It’s hard, even inside of one’s own life. But being able to muster those bright feelings of joy, hope, humor, momentary mirth—it’s galvanizing. And it allows you to say, this problem, as large as it is, is not larger than me and what I belong to. If I can see something in a way that allows me to chuckle, then it means that I have an insight that’s vital and that’s grounding. I have access to a perspective that puts me in a position of authority and rightness. That’s so important when you feel like your rights are being contested. 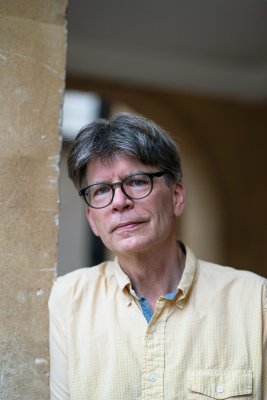 Richard Powers on His New Novel, 'Bewilderment'
Next Up: Editor's Pick