‘Our Stories Are Universal Too.’ Terence Blanchard on Bringing Black Narratives to the Metropolitan Opera

When the Metropolitan Opera reopens Monday after an 18-month closure caused by the pandemic, it will do so with Fire Shut Up In My Bones, the first opera in the Met’s 138-year history written by a Black composer.

An already renowned jazz trumpeter and composer, with his adaptation of New York Times columnist Charles Blow’s memoir by the same name Terence Blanchard will bring to the stage what he describes as a universal story spoken in “our language”—the language and sound of Black America, featuring an all-Black cast.

Blanchard, it seems, has managed to capture at least some sounds that for the nation’s still overwhelmingly white opera audiences will, almost certainly, be new: The particular musical quality of the 20 minutes before services begin at a Black church; the multi-sensory experience—the human percussion of dancing and the stunning visuals created by complicated synchronized group movement—of a Black fraternity step show. And yet the story of Fire Shut Up In My Bones, Blanchard said when we spoke during a rehearsal shortly before opening night, is a universal one about human pain, joy, love and healing.

A New Orleans native who has been studying and creating musical compositions since the age of 15, Blanchard grew up in one of the first American cities that by the 19th century was home to multiple opera houses. His career has included one previous opera and composing music for multiple films, including for Spike Lee’s Do The Right Thing and Malcolm X. When the show begins Monday night at The Met, Fire Shut Up in My Bones will also be simulcast for an audience in a Harlem park and, in keeping with a longstanding tradition, on certain large screens in Times Square.

As Blanchard makes history at the Met, he hopes, he tells me, to serve not as a” token,” but a “turnkey.” He wants to be the man behind an evocative show that opens the door to many other stories, many other artists, many other voices on this stage and others.

TIME: Was casting a full show’s worth of operatically trained Black singers a challenge?

Blanchard: Oh, man. Another journalist, he put it to me another way. He asked me. ‘Do you think that your operas will inspire young African Americans to sing opera?’ I’m like, dude, they’re already out here in large numbers. They just don’t get covered. And they don’t get work. As a matter of fact, there was one lady, she had a small role, but she couldn’t get off work [from her day job]. So we had to replace her. That’s the reality of what’s going on.

I’m doing this because my father wanted to sing opera. If my father were alive, he’d be 100. And he was part of a group of Black male singers that was taught by this one guy named Osceola Blanchet. He taught a lot of African American men opera in New Orleans. I used to think they were weird. It wasn’t what my boys’ pops were into.

The first day that we were here [rehearsing inside the Metropolitan Opera’s Lincoln Square facilities], I had an epiphany. A lot of them, like my dad, grew up singing in the church. And when it comes time to do [opera], they have to turn that off. And one of the things that I’ve been telling all of them is, no, I want you to bring that back to this.

Dancers perform a scene during a rehearsal for Terence Blanchard's "Fire Shut Up in My Bones," at the Metropolitan Opera on Sept. 24, 2021, in New York.
Timothy A. Clary—AFP via Getty Images

Has that been challenging? Opera, and the formally trained operatic voice, has such a distinctive sound. How did you get the hybrid performances you are describing?

Julia [Bullock, a soprano in an earlier St. Louis production], she’s singing in an operatic voice. But, when she does [the aria] “Peculiar Grace,” she mixes both and it’s…yeah. [Blanchard closes his eyes as if hearing something pleasurable.] She had us in tears the first day she did it. She said, ‘I heard what you said about bringing our culture back to the opera stage. Do you mind if I, like, go ahead?’ What’s beautiful about being here is that everybody in this production understands the importance of it and has taken ownership. And I think a lot of it has to do with story. Everybody recognizes the characters. Every day of rehearsal for a month, this thing has been inching towards something that’s just like a seed that was planted.

When I heard about this show and its source material, a Black man’s memoir, I thought to myself, there are major challenges here. One of them: how do you avoid watering it down to just the things that opera’s traditional audience might be familiar with or prepared to hear?

It’s always rough for me to talk about myself. I’ve never been a self-promoter. But my composition teacher, Roger Dickerson, told me something when I was excited about having a career as a film composer. He said, ‘One day, you should start to think about your background as a jazz musician, and how you can take that articulation and phrasing and bring it into the opera.’ I thought, wow, okay. And then when you listen to Stravinsky’s Rite of Spring or anything, that’s what they do, take folklore and build on it.

We tend to forget that we are human too, so our stories are universal too. If you tell a story right, people will get it, people will feel it. That’s one of the things that have kept people like me away for 130-something years. People tend to think that’s not the case, that our stories, our experiences, our struggles are not universal. But everyone falls in love.

But at the same time, in the list of things that I wrote down while I was sitting in rehearsal, were notes about how very familiar and Black—and not like the opera I have been exposed to—the show was. And in a lot of ways they are what make the show deeply interesting. I don’t think there’s ever been a fraternity step show on the Met stage before, has there?

That’s funny, because when we did this show [in St. Louis], they wanted to cut it, the step show. They didn’t understand the significance of it. And I was, like, no, no, no. That has to stay.

That’s the thing that I have been trying to get my friends to understand who don’t really have a relationship with opera. They keep thinking they will see a Viking with horns, a staff, a long cape. To me, that’s the thing I think people miss. Bro, this is the highest form of musical theater. When we were in New Orleans, and we did my first opera, Champion [in 2013], there was an elderly brother that came up to me after the show. He said, ‘Man, thank you. I really loved it.’ And I said, ‘Thank you very much.’ And then he said, ‘If this is opera, I’ll come.’ And that stuck with me.

Cast members perform a scene during a rehearsal for Terence Blanchard's "Fire Shut Up in My Bones," at the Metropolitan Opera on Sept. 24, 2021, in New York City
Timothy A. Clary—AFP via Getty Images

I think the operatic world and jazz world, sometimes we can get so bogged down in the history of what it is that we do. And the thing that I keep thinking about [is], what was it like for people to see La Bohème for the first time? They were seeing themselves on stage. I think that’s where this [show] falls in, something relevant for people. There is a tradition that you’re trying to deal with, but at the same time, you are going to look forward.

How much of that is also about the pressure of being a first?

Maybe it’s in the back of my subconscious. I’ll put it to you this way: I’ve been wondering, ‘Why me?’ I don’t want to let those guys down—Hale Smith, William Grant Still, a bunch of people like that who have come before me. Even though I’m the first I’m not the first qualified, that’s for damn sure. We need to keep saying that. Right? Because I don’t want people to get it twisted.

Another thing I’ve been saying is that I don’t want to be a token. I want to be a turnkey, you know. You just can’t have me come here and do this and then go back to doing the same [stuff]. You have to open it up to other people from other races; you have to get women in here to write. It’s always interesting to me how people want to do the same thing, expecting something different. I thought that was the definition of insanity.

But other people would say that’s also the definition of tradition, right?

Traditions are meant to be broken.

Read more: Conductor Yannick Nézet-Séguin Is Ushering in a New Act for the Metropolitan Opera

Earlier, you said to me you feel like you are at the Met because of George Floyd’s murder. What made you say that?

What is happening in this country, everybody’s realizing that there has to be a fundamental change in everything that we do. I’ve seen it in New Orleans, at the museums. I’ve seen it in portions of the educational system in New Orleans. And the thing that I can remember when it first happened was, ‘All right, this needs to be sustained.’ Everybody is on this feeling now, but our culture has turned into an instant culture. Our attention is easily diverted.

Something had to change and I’m kind of like the guy who—you hate to use these words, but it was perfect timing for me. I have enough skill in my writing where the show won’t be a flop. And they [the Metropolitan Opera] can make their statement. But this can’t just be a statement. It has to be the sea change. That’s my entire thing about this. Please don’t do that to me. And they’ve already booked Anthony Davis’ opera on Malcolm X. So I am excited to see what happens.

TIME: How do you want to feel when you walk out of this building with the show behind you?

My trumpet teacher always told me it’s best to be gratified, never satisfied. I want to feel like I gave the singers a great opportunity to show a different side of who they are. I want people to come here and see themselves on that stage. I want people to walk out of this place feeling like they can take ownership of opera. I want my kids to be proud. And, you know, I want William Grant Still and all those guys, even though they are not with us, I want those souls to know that all of their work didn’t go unnoticed.

This interview has been edited for clarity and length 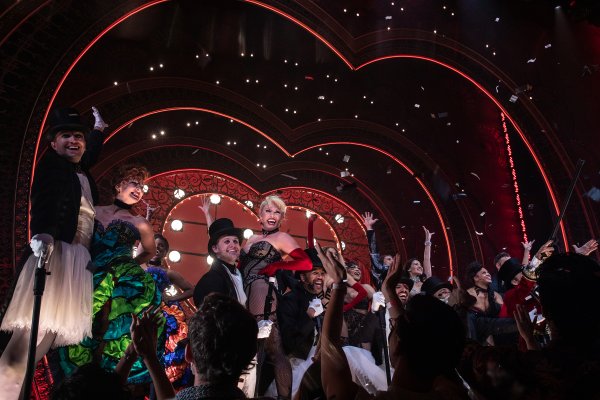 See Photos From Broadway's Jubilant Homecoming
Next Up: Editor's Pick