Germany's Election Produced No Clear Winner. Here's What Happens Next

On Sunday, voters in Germany headed to the polls to choose the country’s new government, but the election produced no clear winner. The E.U.’s richest and most powerful country now faces a wait of weeks and possibly months as the parties attempt to form a coalition government and decide who will succeed Angela Merkel as Chancellor of Germany.

The result was a disappointing one for the center-right Christian Democratic Union (CDU), part of the ruling coalition in Germany for 16 years under Angela Merkel, which lost its lead in the vote share to the center-left Social Democratic Party (SPD). Ending on 25.7% of the vote, the SPD celebrated a 5 percentage point increase on their 2017 result. The CDU came a close second on 24.1%, a dramatic decrease from 33% in 2017.

Annalena Baerbock’s Greens had a more successful election, improving their vote share by 6 percentage points. Along with the pro-business Free Democratic Party (FDP), the Greens are expected to be kingmakers in the coalition negotiations.

But when will a government be formed and what will it look like? Here’s what you need to know:

What happens now that the voting has finished?

In most European countries, a head of state delivers a mandate to the party which finishes first to begin forming a coalition government. In Germany, however, all parties are free to negotiate among themselves. With so little difference in vote share, this process could take months, leaving Merkel to lead as caretaker Chancellor potentially into 2022.

Through a complicated process involving both first-past-the-post and proportional representation, seats in the Bundestag are distributed among the parties. To secure a parliamentary majority, any coalition would need over half the 735 seats available. The SPD and CDU, on 206 and 196 seats respectively, must form an alliance with the third and fourth largest parties to get a majority. Both parties have ruled out aligning with the far-right Alternative for Germany (AfD). This makes the Greens, on 118 seats, and the FDP, on 92 seats, kingmakers of the coalition.

Speaking after exit polls pointed to an SPD lead, the party’s candidate for Chancellor, Olaf Scholz declared his party the winner. “I think we can conclude from the result that we have a mandate to say we want to form the next government,” he said. “The citizens want change.”

Despite the embarrassing losses for the CDU, leader Armin Laschet said he wanted to build an alliance “from the center of the Bundestag [the German parliament].” The political research company Infratest Dimap estimates the CDU lost more than two million votes in this election to the SPD and the Greens.

Having narrowly won the largest number of votes with a popular candidate for Chancellor, the SPD enters coalition negotiations in the strongest position. The CDU is still in with a chance, however. It would not be the first time the second place party formed a coalition—in 1976, the SPD aligned with the FDP against the election winner, the CDU.

The two most likely outcomes of coalition negotiations involve three parties—a “traffic-light” coalition, involving the SPD (red), the FDP (yellow) and Greens, or a “Jamaica” coalition, made up of the CDU (black), FDP (yellow) and the Greens. Either alliance would be the first time a three-way coalition has ruled Germany. Another option is another Grand Coalition between the CDU and SPD, but neither party has signaled a desire to continue ruling together.

The Greens and FDP, which won 14.8% and 11.5% respectively and were popular among younger voters, will likely be kingmakers in deciding between the two largest parties.

The German constitution does not require a new Chancellor to be a member of the largest parliamentary group—they simply have to be the choice candidate of the coalition. Both the SPD’s Scholz, Germany’s finance minister, and the CDU’s Laschet are still vying for the top job.

Who is Olaf Scholz, the SDP candidate for Chancellor?

Scholz was mayor of Hamburg before becoming finance minister and Vice Chancellor in 2017. The 63-year-old earned praise for coordinating the federal government’s €750bn ($878bn) relief fund for businesses and workers.

While he has been criticized for lacking emotion—he famously said during an interview, “I’m standing for the job of Chancellor, not circus director”—he offers stability and continuity, having served as Merkel’s deputy. He ran a highly successful campaign, connecting with victims of historic flooding and performing well in TV debates.

He is also responsible for negotiating the E.U. pandemic relief fund, winning him favor with Emmanuel Macron’s French government. He is popular among voters—according to exit poll data, nearly half of those who voted for the SPD said they would not have chosen the party if they had fielded a different candidate for Chancellor.

Critics within the SPD accuse Scholz of being too conservative. Although he entered politics as a Socialist Youth leader, his views later shifted toward the center—he famously backed former Chancellor Gerhard Schröder’s Agenda 2010 reforms which cut taxes and welfare. Opponents on the right have pointed to his mishandling of two financial scandals, including the collapse of payments company Wirecard. This did not seem to sway voters’ opinion, however.

Who is Armin Laschet, the CDU candidate for Chancellor?

Scholz’s rival, 60-year-old Armin Laschet, is leader of the CDU and has governed North Rhine-Westphalia, the most populous state in Germany, since 2017. Although his party topped opinion polls for most of the election campaign, his personal approval rating fell below Scholz in the final weeks. Many are blaming Laschet, who has been accused of lacking a vision for Germany, for the CDU’s historic defeat.

Leading up to the election Laschet committed a series of gaffes which lost him further support. When devastating flooding hit western Germany, including North Rhine-Westphalia, he was photographed laughing and was later accused of a lack of empathy. When pressed on the climate crisis’ role in the flooding, Laschet said the CDU would not “start changing our whole approach.” He then U-turned days later, saying “we all need to do what we can to prevent climate change,” due to a public backlash.

Merkel herself did not rally behind Laschet much until the final few weeks of the campaign when his support was dwindling. While he was her loyal ally in 2015 when she began letting hundreds of thousands of refugees into Germany, he distanced himself from her amid public frustration during the pandemic. Her preferred successor, defense minister Annegret Kramp-Karrenbauer, stepped down as CDU leader in February 2020 over divisions in the party, and said she would not run to be chancellor.

Who are the kingmakers?

Scholz and Laschet now face the task of convincing the climate-focused Greens and pro-business FDP to join their parties in a coalition. Negotiations are expected to be complicated—the two smaller parties disagree on fundamental issues, including taxation and debt brakes. Both parties are aware, however, that they must put differences aside for a shot at power.

The FDP narrowly lost out of joining Merkel’s coalition government in 2017. The party’s leader, Christian Lindner, stated his preference for a CDU-led government as the two parties have “the most in common.”

The Greens, which have shifted to a more center-left, pro-business stance under new leader Baerbock have not stated a preference. Baerbock has vowed that any alliance would have to make climate change one of the government’s top priorities.

Green Party chairman Robert Habeck and Annalena Baerbock, party chairwoman and former candidate for chancellor of the Green Party, give a press conference at the Heinrich Boell Foundation on the outcome of the federal and state elections in Berlin and Mecklenburg-Western Pomerania on Sept. 27, 2021 in Berlin, Germany.
Andreas Gora—Pool/Getty Images

While the Greens initially experienced a surge in popularity following the announcement of Baerbock’s leadership, a series of personal blunders by the 40-year-old, including a delay in reporting party spending, made a female-led coalition seem unlikely.

It could be months until we know the outcome of the negotiations. Until then, Merkel will continue to extend her 16 years as a power as a caretaker Chancellor. 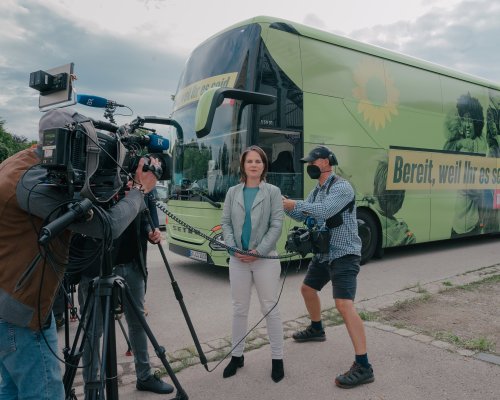 Can Annalena Baerbock Change Germany?
Next Up: Editor's Pick