Here's What We Learned From Three New Britney Spears Documentaries, From Secret Surveillance to #FreeBritney Infiltrators

A flurry of new documentaries centered on Britney Spears and her court-ordered conservatorship have shed more light on the immense hardship that Britney has faced over the course of the 13-year legal arrangement.

The three specials—FX and the New York Times’ Controlling Britney Spears, CNN’s Toxic: Britney Spears‘ Battle for Freedom and Netflix’s Britney Vs Spears—were all released in the week leading up to Britney’s highly anticipated Sept. 29 court date, a hearing at which Los Angeles County Superior Court Judge Brenda Penny is expected to address Britney’s petitions to remove her father, Jamie Spears, as conservator and terminate the conservatorship as well as Jamie’s own unexpected petition to end the arrangement.

Attention surrounding the hearing and the fan-driven #FreeBritney movement has continued to ramp up in recent days as reports of shocking new details regarding Britney’s case, as alleged by the documentaries, have spread. These bombshells range from allegations that a security firm hired by Jamie bugged Britney’s home, including her bedroom, in order to monitor her private conversations, to claims that Britney pushed for years early in the conservatorship to be allowed to retain counsel outside of her court-appointed lawyer, Samuel D. Ingham III.

The three documentaries have arrived amid ongoing fallout from Britney’s explosive June 23 testimony, during which she publicly stated that the conservatorship is “abusive” and that she wants it to end immediately. There have since been a number of rapid-fire developments in the case, including Ingham resigning and Judge Penny approving Britney’s request for prominent Hollywood lawyer Mathew S. Rosengart—a former federal prosecutor who has represented a number of A-list celebrities, including Sean Penn, Steven Spielberg and Julia Louis-Dreyfus, in recent years—to represent her going forward.

While much of the content of these three documentaries is a rehash of facts that have already been pored over ad nauseam, some of them did drop several key revelations. Here are the major takeaways from the new Britney Spears documentaries.

Of the former members of Britney’s inner circle who appear in Controlling Britney Spears, the one who seemed to have the most insight into the ways in which Jamie and others involved in the conservatorship allegedly controlled Britney’s life was Alex Vlasov, a former executive assistant to Black Box Security founder Edan Yemini, whose firm was contracted by Jamie.

In the documentary, Vlasov says that he was told that a 24/7 security detail was a part of the conservatorship and was what the client, i.e. Jamie, was asking for. “It really reminded me of somebody that was in prison,” he says of how Britney was treated. “Security was put in a position to be the prison guards, essentially.”

Vlasov’s most shocking revelations involve allegations that Black Box put measures in place to monitor Britney’s cell phone use, including calls, texts, photos and browsing history, as well as in-person conversations she had with, among others, her children and now-fiancé Sam Asghari in the privacy of her own home. Audio recording devices were even placed in Britney’s bedroom, likely without her knowledge, according to Vlasov.

“They openly talked about monitoring her,” Vlasov says in the documentary, which alleges that Jamie, Yemini and Robin Greenhill, an associate of Britney’s former business manager Lou Taylor at Tri Star Sports and Entertainment, were the three people in primary control of Britney’s day-to-day life. “Their reasons for monitoring were looking for bad influences, looking for potential illegal activity that might happen. But they [would] also monitor conversations with her friends, with her mom, with her lawyer Sam Ingham.”

Following the documentary’s Sept. 24 release, Rosengart filed a supplemental motion calling for Jamie’s immediate suspension from the conservatorship and an investigation into the surveillance claims. In the filing, Rosengart noted that California is a two-party consent state, meaning it could be illegal for Britney’s communications to be monitored and recorded without her consent.

“Any unauthorized intercepting or monitoring of Britney’s communications—especially attorney-client communications, which are a sacrosanct part of the legal system—would represent a shameful violation of her privacy rights and a striking example of the deprivation of her civil liberties,” Rosengart said in a statement. “Placing a listening device in Britney’s bedroom would be particularly horrifying, and corroborates so much of her compelling, poignant testimony. Mr. Spears has crossed unfathomable lines.”

New insight into Britney’s battle for her own lawyer

In Britney Vs Spears, director Erin Lee Carr (How To Fix a Drug Scandal, Dirty Money) and journalist Jenny Eliscu, who has been reporting on Britney for two decades, detail how Britney attempted several times in the early years of the conservatorship to get her own lawyer.

After the court waived Britney’s right to five days’ advance notice of the hearing on Jamie’s conservatorship petition, Britney was put under a temporary conservatorship in 2008 under “orders related to dementia placement,” according to a court document shown in the film.

Britney then reached out to her ex-boyfriend Adnan Ghalib, via text messages reviewed by the Times, to arrange a meeting with attorney Adam Streisand. When Streisand told the court that Britney wanted an independent professional to act as conservator rather than Jamie, the judge, referencing a report that said Britney did not have the capacity to retain counsel and have an attorney-client relationship, responded that Streisand could not represent her and asked him to leave the courtroom. Ingham was then appointed by the court to take on Britney’s case.

In January 2009, Britney reportedly left another lawyer a voicemail, the audio of which is featured in Britney Vs Spears, asking him to help her end her conservatorship but retain her custodial rights.

“I’m calling again because I just wanted to make sure that during the process of eliminating the conservatorship that my father has threatened me several times, to you know, he’ll take my children away,” she says in the voicemail.

Shortly after that, Britney reportedly signed a court petition organized by Ghalib and her former manager Sam Lutfi calling for Ingham to be replaced. In the documentary, Eliscu says that she herself brought the petition to the Montage hotel in Beverly Hills, where Britney secretly met her in a bathroom stall to sign the papers.

“BRITNEY JEAN SPEARS has expressed her lack of confidence in her court-appointed attorney SAMUEL INGHAM, III,” the petition read. “CERTAINLY THIS WOMAN WHO CAN COMPLETE TWO NEW CD’s AND BE SET TO GO ON A NATIONAL TOUR HAS SUFFICIENT CAPACITY, AFTER NEARLY ONE YEAR OF PROTECTIVE CONSERVATORSHIP TO RETAIN COUNSEL OF HER CHOICE AND IN WHOM SHE HAS CONFIDENCE.”

However, after Ingham allegedly emailed Jamie asking him to do whatever was necessary to “squash” the documents, the court ultimately ruled that Britney lacked the capacity to choose her own lawyer. Britney reportedly then received an email from the attorney she was trying to hire, John Anderson, in which he wrote, “I can say no more; and do no more. And that is the end for me.”

Later that year, Jamie was granted even more control in the conservatorship, giving him the power to do things like manage Britney’s professional opportunities and cancel her credit cards.

A decade later in 2019, after Britney checked into a mental health facility under shady circumstances, Controlling Britney Spears alleges that she asked a lawyer to sneak into the facility by pretending to be a plumber in order to meet with her. The lawyer declined, prompting the following response from Britney: “You have to be approved by the court before I hire you, but I don’t understand how can I know I want to hire you unless I meet with you first?”

Jamie allegedly took Britney’s phone away after finding out she had been communicating with a lawyer.

Attempted infiltration of the #FreeBritney movement

As the #FreeBritney movement began to gain steam in recent years, Vlasov says that it drew the attention of those in control in the conservatorship. Controlling Britney Spears alleges that Black Box Security began sending undercover investigators to infiltrate #FreeBritney rallies in 2019 in order to identify those involved and prepare a “threat assessment report.”

“Undercover investigators were placed within the crowds to talk to fans to ID them, to document who they were. It was all under the umbrella of ‘this is for Britney’s protection,'” Vlasov says in the documentary. “They were extremely nervous, because they had zero control over the #FreeBritney movement and what’s going to come out of it.”

Britney has since expressed her gratitude for #FreeBritney supporters on social media. After being granted permission to hire Rosengart in July, she wrote on Instagram, “Thank you to my fans who are supporting me…. You have no idea what it means to me be supported by such awesome fans !!!! God bless you all !!!!! Pssss this is me celebrating by horseback riding and doing cartwheels today !!!! #FreeBritney.” 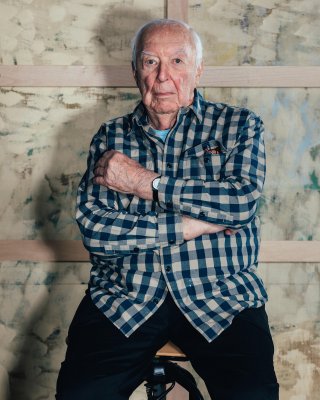 Jasper Johns: "Dying While on Assignment Doesn’t Seem Like a Bad Idea"
Next Up: Editor's Pick