The Man the U.S. Didn't Mean to Kill in Afghanistan

For the last 15 years, Zamarai Ahmadi had been working at a small, California-based organization that was trying to tackle malnutrition in Afghanistan by introducing soybean farming and processing.
Courtesy NEI
By Krista Mahr

It was a hot afternoon in late August, and two friends sat in a white Toyota Corolla, watching a long line of people waiting to get money from a bank in downtown Kabul. They were parked in Shahr-e Naw, a neighborhood that was, until recently, a trendy place where young urbanites liked to hang out. Two weeks after the Taliban had taken over, the friends talked about how different things looked. People weren’t wearing the same clothes. Everything had changed so fast.

The car’s driver, 43-year-old Zamarai Ahmadi, already had plans to get out. For the last 15 years, he had been working at a small, California-based organization that was trying to tackle malnutrition in Afghanistan by introducing soybean farming and processing. As the Taliban closed in on the capital, and the U.S. announced it would grant visas to the employees of U.S.-based organizations, Zamarai had rushed to get his paperwork in order, joking with colleagues that he’d be at the front of the line because he’d worked there the longest. Everyone knew the Taliban didn’t like foreigners, and Zamarai was nervous. “He didn’t feel safe at all,’” recalls Han, the friend with him in the car that day, who requested only part of his name be used for his own security.

Zamarai was in more danger than he knew, but the Taliban wasn’t the threat. By the time he headed home, the U.S. military had been tracking him for about eight hours. Three days earlier, on Aug. 26, ISIS-K operatives had killed 13 American troops and more than 100 Afghans in an attack on the Kabul airport as the U.S. evacuated people ahead of its withdrawal deadline. Now the U.S. military was fielding new intelligence that another ISIS-K assault was imminent, and that the group planned to carry it out using a white Toyota Corolla, a popular make and model in Afghanistan. After Zamarai stopped at a building the military believed was being used by ISIS-K, an MQ-9 Reaper drone locked onto his vehicle. As he backed his car into the cramped courtyard of his home a few miles from the airport, hours after his conversation with Han, a drone dropped a single Hellfire missile squarely on its target. It was 4:53PM.

The strike shredded the Corolla, warping part of its frame into a twisted half moon and killing ten people, including Zamarai and three of his children. It was precise and brutal—a “righteous” strike, as Gen. Mark Milley called it a few days later. But it wasn’t long before the U.S. military would conclude, along with several U.S. media outlets, that they had made a gross error; it was “highly unlikely” that the car or anyone killed that day was affiliated with ISIS-K, U.S. Commander Gen. Kenneth McKenzie said. The intelligence, the car, the driver, the courtyard, the dead children were all a horrific, precision-guided coda to America’s misguided 20-year war in which tens of thousands of Afghan civilians lost their lives.

Relatives and neighbors of the Ahmadi family gathered around the incinerated husk of a vehicle, targeted a day earlier by an American drone strike, in Kabul on Aug. 30, 2021. Ten civilians, including seven children, were killed.
Marcus Yam—Los Angeles Times/Getty Images

Zamarai, as his friends called him, grew up in Kabul, where his family had lived for decades. He started working for Nutrition and Education International (NEI) as a handyman in 2006. He didn’t know how to read or write, but it quickly became obvious that he had a knack for mechanics. NEI regularly brought in international engineers to help set up soy processing factories around the country, and Zamarai would help them. He eventually rose through the ranks to become the organization’s technical engineer. “That title wasn’t given to him because we liked him,” says Dr. Steven Kwon, NEI’s president and founder in Pasadena, California. “It was because he was capable.”

But everyone did like Zamarai. By several friends and colleagues’ accounts, he was the kind of person that things naturally revolved around. “Not a quiet person,” laughs his boss, Dr. Walid, who also requested only part of his name be used. He was quick with a joke and a smile, trying to make people feel at ease in a country where things are so often uneasy. Years ago, his family asked him to step in after his uncle died and marry his widow. He did, becoming a stepfather and later having four children of his own. On his modest engineer’s salary, he helped support his younger brothers and their families, with whom he shared a home. Money was tight, but things were good, those who knew him said.

At work, Zamarai was the office’s go-to guy. He’d been there longer than almost anybody. Officially, his job was to make sure the organization’s soy processing facilities stayed up and running. But he also fixed the plumbing, gardened, and took overseas visitors out to a local lunch spot for a plate of palau. At the end of the work day, he’d hit the gym on the office compound, where he and Dr. Walid had set up a loudspeaker to play music while they worked out. Sometimes they took the party outside and played volleyball instead, blasting Bollywood tunes over the compound walls.

When NEI downsized a few years ago and let one of its drivers go, Zamarai stepped in and started driving a kind of office carpool. On workdays, he left his house in the morning in the Corolla to pick up colleagues on the way to the office, and at the end of the day, he dropped them off before returning home. “It was not his job, but he was a very humble person,” says one co-worker, who requested his name not be used due to security concerns. “Any way he was needed, he was ready to do it.”

Zamarai loved Afghanistan, but like so many others, he was growing desperate to leave.
Courtesy NEI

Zamarai ended up traveling around the country for work, troubleshooting at NEI’s various soy processing plants. He liked getting out of the dusty, frenetic capital, particularly if there was a friend from the office going with him. He’d use the opportunity to take in the local sites, something that got harder as the countryside got more dangerous during the war. He’d stop to take pictures, pick up local food, and play music from his phone in the car.

Zamarai loved Afghanistan, but like so many others, he was growing desperate to leave. Four days before he was killed, he went with another longtime colleague to distribute food to people living in a Kabul park after fleeing their homes during the last days of the war. The two aid workers sat and talked, discussing the situation since the Taliban had taken over. Zamarai was worried about his family’s safety, and wondered how, if the Taliban wouldn’t allow the U.S.-based organization to keep operating, they would make it. After he submitted his paperwork to leave, he was excited about the prospect of starting over in the U.S., several people said.

All of this may have been weighing on Zamarai the morning he was killed. Whatever it was, “he was not 100%,” recalls Han. Zamarai had picked Han up at his home. The friends hadn’t seen each other in a while and they caught up, talked about their U.S. paperwork. They bought french fries and bread for breakfast, picked up Dr. Walid’s computer that he’d forgotten at home, went to the NEI office, and later, the bank and a couple of Taliban security checkpoints to get permission to distribute emergency food for the non-profit.

To the U.S. military, scrambling to prevent another deadly attack on the U.S. troops, Zamarai’s very normal day apparently aligned with alarming intelligence they were receiving about a planned ISIS-K attack. As many as six Reapers were watching one of the buildings Zamarai stopped at that morning. Dr. Walid believes it was his home, where Zamarai picked up a laptop, that the U.S. thought was an ISIS-K safe house. He denies any association with ISIS-K. “We’ve been living here for 40 years,” he says. “None of us are affiliated with that group… We don’t even talk about it.”

A man bids farewell to Zamarai Ahmadi in his casket during a mass funeral in Kabul on Aug. 30, 2021.
Marcus Yam—Los Angeles Times/Getty Images

Nevertheless, the U.S. strike cell watching Zamarai apparently concluded his movements confirmed what they were hearing. By the time he arrived at the courtyard of his home, about two miles from the airport, the military decided they couldn’t wait for the car to get any closer to the U.S. troops nearby. They dropped the missile, killing Zamarai and his three sons, along with another adult and five other children. The explosion was heard across the neighborhood. In videos that circulated afterwards, a giant plume of smoke rises between rooftops. A man frantically aims a fire extinguisher at the vehicle as it burns.

The U.S. initially said it had thwarted an ISIS-K plot. But the people who had worked with Zamarai for years at NEI always knew the U.S. had the wrong person. It could never have been him, they all said. And three weeks later, McKenzie admitted as much, calling the assault a tragic mistake. “Clearly our intelligence was wrong on this particular white Toyota Corolla,” McKenzie told reporters. “We thought this was a good lead. We were wrong.”

The U.S. cleared Zamarai’s name, but it didn’t clear the lingering sense of suspicion his colleagues feel hangs over them now. It doesn’t solve the problem of what his widow and surviving children will do without any income, in a country where it’s an open question whether women will be allowed to work. They are now in a safe house in Kabul, where nobody will recognize them. NEI is asking the U.S. for help getting them and all of their Kabul staff out of the country, while Congress deliberates whether or not to offer the family compensation.

They, more than anyone, bear the burden of the last fatal mistake of America’s misguided war in Afghanistan. Kabul is full of white Corollas, clogging the roads, honking their horns, waiting at road blocks, stopping to hail a friend. It could have been anybody in any one of those cars that day. But it was Zamarai Ahmadi—jokester, gym rat, music lover, husband, father, optimist. 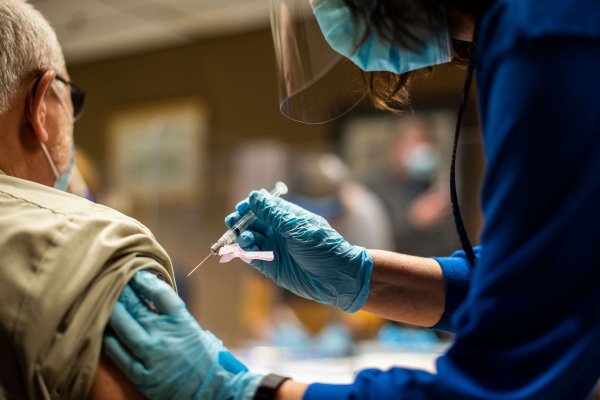