Deb Haaland: Gabby Petito Case Should Be a Reminder of Missing Indigenous Women

(WASHINGTON) — Speaking in personal terms, Interior Secretary Deb Haaland said extensive news media coverage of the disappearance and death of 22-year-old Gabby Petito while on a cross-country trip should be a reminder of hundreds of Native American girls and women who are missing or murdered in the United States.

Haaland, the first Native American Cabinet secretary, said that her heart goes out to Petito’s family, but that she also grieves for “so many Indigenous women” whose families have endured similar heartache “for the last 500 years.”

The search for Petito generated a whirlwind of news coverage, especially on cable television, as well as a frenzy of online sleuthing, with tips, possible sightings and theories shared by the hundreds of thousands on TikTok, Instagram and YouTube. The Florida woman, who disappeared while on a cross-country trip with her boyfriend, was found dead at the edge of Grand Teton National Park in Wyoming. Authorities have determined she was a homicide victim.

A report prepared for the state of Wyoming found that at least 710 Native Americans were reported missing between 2011 and late 2020. Between 2010 and 2019, the homicide rate per 100,000 for Indigenous people was 26.8, eight times higher than the homicide rate for white people, the report said.

Haaland, a member of the Pueblo Laguna tribe, said she has frequently seen Native American family members posting pictures on fences and the sides of buildings to help locate missing girls or women. When that happens, “you know I see my sisters,” she told reporters Thursday at a news conference. “I see my mother. I see my aunties or my nieces or even my own child. So I feel that every woman and every person who is in this victimized place deserves attention and deserves to be cared about.”

A former New Mexico congresswoman, Haaland pushed for a law signed last year to address the crisis of missing, murdered and trafficked Indigenous women. The law, known as Savanna’s Act, is intended to help law enforcement track, solve and prevent crimes against Native Americans, especially women and girls. The law is named for Savanna LaFontaine-Greywind, a member of the Spirit Lake tribe who was abducted and killed in 2017 near Fargo, North Dakota. Greywind, 22, was pregnant, and her unborn baby was cut from her body. Her remains were found in the Red River.

Haaland said she sees her mission as interior secretary in part as a way to elevate attention on Native American issues.

“I feel like it’s my job to lift up this issue as best I can. And hopefully, the folks who are writing the news, and broadcasting the news will understand that these women are also friends, neighbors, classmates and work colleagues,” she said.

Haaland stressed that her comments were not intended to downplay the pain suffered by Petito’s family.

Everyone deserves to feel safe in their communities, Haaland said, but “where I can make a difference in particular is in addressing the missing and murdered Indigenous peoples crisis, which has occurred since the beginning of colonization of Indigenous people on this continent for about the last 500 years and it continues.”

Haaland created a Missing & Murdered Unit within the Bureau of Indian Affairs Office of Justice Services earlier this year and has established a joint commission of national tribal leaders and experts, led by the Interior and Justice departments, to reduce violent crime against American Indians and Alaska Natives. Haaland also ordered Interior to investigate its past oversight of Native American boarding schools that forced hundreds of thousands of children from their families and communities.

“The primary goal of this work is to share the truth of this dark chapter in our nation’s history, so that we can begin to heal,” Haaland said.

A written report is expected next year. 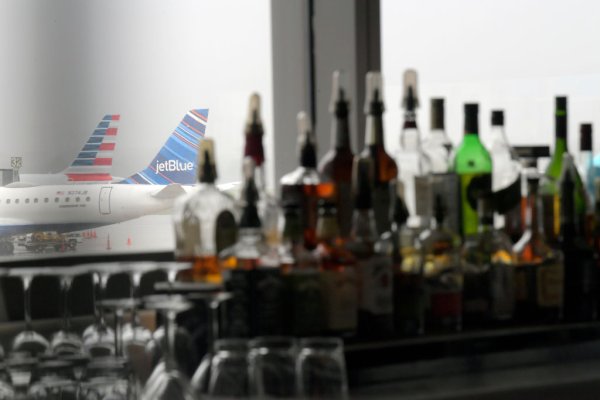 U.S. Lawmaker Wants to Ban Booze ‘To Go’ at Airports
Next Up: Editor's Pick