Biden Laid Out an Ambitious Global Agenda at the UN General Assembly. Here's How It Compares to Reality

U.S. President Joe Biden speaks during the United Nations General Assembly via live stream in New York, U.S., on Tuesday, Sept. 21, 2021
Michael Nagle—Bloomberg/Getty Images
Ideas
By Ian Bremmer
Bremmer is a foreign affairs columnist and editor-at-large at TIME. He is the president of Eurasia Group, a political-risk consultancy, and GZERO Media, a company dedicated to providing intelligent and engaging coverage of international affairs. He teaches applied geopolitics at Columbia University’s School of International and Public Affairs and his most recent book is Us vs. Them: The Failure of Globalism.

Everything is easier said than done, and that’s especially true for big challenges. Like, for example, trying to establish America’s place in the 21st century world—or persuading other governments to place their confidence in you. But no matter how tall the tasks, we shouldn’t dismiss a presidential speech at the United Nations as only hot air.

With that in mind, let’s look closely at President Biden’s first address to the United Nations General Assembly (UNGA) this week and compare it with the choices the Biden administration has actually made.

The agenda Biden laid out at the U.N. was plenty ambitious. His priorities are “ending this pandemic; addressing the climate crisis; managing the shifts in global power dynamics; shaping the rules of the world on vital issues like trade, cyber, and emerging technologies; and facing the threat of terrorism as it stands today.” Does he mean what he says?

Biden has pledged to “vaccinate the world,” and he told the U.N. that the U.S. has “shipped more than 160 million doses of COVID-19 vaccine to other countries” with promises to do much more through COVAX, the global vaccine facility. The president also held a virtual COVID-19 summit meeting on the UNGA sidelines this week, to demonstrate his administration’s commitment to leading the ongoing pandemic response.

To date, the U.S. has donated more vaccine than any other country, but to raise the number of people vaccinated worldwide from the current 30 percent to the hoped-for 70 percent by September 2022, experts estimate that 11 billion doses will be needed. Biden has committed the U.S. to donate 500 million more doses of the Pfizer vaccine to developing countries beginning next year, but if that goal is to be met his administration needs a clear stance on booster shots for already vaccinated people and for first shots for less-at-risk young people.

Mixed messages from the Biden administration on this question leave other countries wondering what they can expect from the U.S. and other wealthy governments. If they prioritize providing booster shots for their own people it would make the current goals virtually impossible to reach, extending COVID-19’s life in much of the world. And poorer countries have good reason to be skeptical: Washington has promised 580 million doses but has so far delivered just 160 million.

U.S. allies and many others were delighted that President Biden recommitted to the Paris Climate Agreement so quickly after he became president. At the UN, Biden promised to double the amount of money (to $11 billion) that the U.S. spends each year to help poor countries cope with climate change. But can Biden sell this plan to Congress, other countries will wonder? And what form will the spending take?

But the greatest climate challenge for Biden at the COP26 climate conference in Glasgow in November will be to persuade China and India to do much more that what they’ve already promised. These two countries generate historic levels of greenhouse gas emissions, but they’re reluctant to make the sacrifices needed to reduce them because, they like to remind us, it was the Western industrialized powers that have inflicted most damage on the environment over the past 200 years.

To meet the goal of zero net emissions by 2050 set out by the Intergovernmental Panel on Climate Change (IPCC), China must accelerate its emissions cuts, and India will probably have to be paid to bolster its economy as tougher climate rules are enforced. For now, there is still no legal pathway to reach that goal. Here, Biden’s bind is made much worse by memories of the Trump administration. Why, other governments can reasonably wonder, would we make painful economic sacrifices to reduce emissions when the next U.S. president might again reverse course on climate?

Biden told the UN this week that his administration has “renewed [U.S.] engagement with the European Union, a fundamental partner in tackling the full range of significant issues facing our world today.” Yet, a number of European leaders aren’t so sure, as new flashpoints emerge in the transatlantic relationship.

Next came the firestorm over the announcement last week that the U.S., Australia, and Britain had agreed to an Indo-Pacific Defense Pact, known as AUKUS. The NATO allies in Europe, particularly France, were incensed about being excluded from the arrangement and kept in the dark until it was finalized. Biden reached out directly to French President Emmanuel Macron to ease French anger.

Lastly, until this week, the U.S. had maintained a COVID-19 travel ban on international visitors, even on Europeans who were fully vaccinated. The delay in lifting that ban created plenty of ill feeling in Europe, which opened up to American visitors months ago.

Biden has demonstrated that he knows he needs to manage transatlantic relations more carefully, and Europe still needs solid relations with Washington. But Biden hasn’t yet offered Europeans the hoped-for total break with the Trump era.

Finally, though Biden didn’t mention AUKUS during his UN speech, he did hail “the Quad partnership among Australia, India, Japan, and the United States” which, Biden said, will “take on challenges ranging from health security to climate to emerging technologies.”

What he didn’t say is that the true purpose of the Quad partnership – and of AUKUS – is to assert the influence of the U.S. and its allies as a counterweight in Asia to expanding China. Though Biden never mentioned China by name at the UN, he did say that the U.S. is not “seeking a new Cold War or a world divided into rigid blocs.” But it’s hard to persuade China’s leaders that the Quad and AUKUS are not designed for exactly that purpose. Biden’s decision to continue Donald Trump’s tariffs on China and recent U.S. efforts to stunt the growth of China’s largest technology company can only further fuel the suspicions of the hawks in Beijing who argue most strongly for a confrontational approach toward Washington. 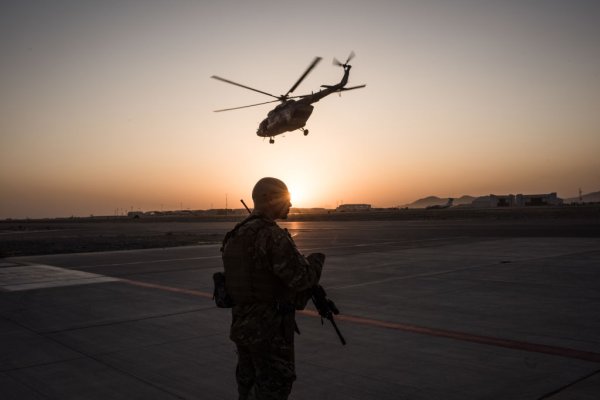 Why Didn't We Leave Afghanistan Before Now? In a Word: Fear
Next Up: Editor's Pick