With His Agenda on the Brink, Joe Biden Scrambles to Unite Democrats

Joe Biden ran for president promising to be a savvy dealmaker in Congress. But now, with his domestic agenda threatened by disagreements within his own party, he is facing the ultimate test.

Biden spent Wednesday afternoon and evening huddling in the Oval Office with three groups of Democratic lawmakers, trying to convince them to overcome their differences to pass an infrastructure bill that would invest $1 trillion in repairing the country’s aging roads and bridges, and a $3.5 trillion bill that would expand healthcare, childcare and community college, and authorize paid family leave. It was his most significant foray yet into managing the divisions within his party on these bills, and the pressure is enormous for his involvement to yield results.

The success of Biden’s first term and Democrats’ fate in the midterm elections largely hinge on these two pieces of legislation. But, with no margin for error in the Senate and a three vote margin in the House, every vote counts, and the moderate and progressive wings of the party can’t agree on the cost of a reconciliation bill.

For months, Biden and his team have been working the phones and signing onto Zooms with lawmakers, aides, and outside groups to unite a disparate Democratic caucus behind these bills. But aides say those calls have typically focused on explaining the substance of the bills, rather than discussing strategy to get them passed. “Progressives are relying on Pelosi to figure this out,” says one Congressional aide linked with the progressive wing, referring to House Speaker Nancy Pelosi. “The White House hasn’t leaned on House members to vote yes. There were times where the Obama Administration made it clear that they needed progressive votes. This is not that.”

Now, with a deadline looming next week—which Pelosi and a group of moderates agreed on over the summer—Biden has to wade into the fray. He has so far managed to largely float above the fractures in his party, avoiding a bruising primary fight and convincing Democrats to coalesce quickly around a COVID-19 relief package in the early days of his presidency. But with his approval ratings sinking amid a surge of the Delta variant and a chaotic Afghanistan withdrawal, these twin pieces of legislation could be a political boost Biden desperately needs—if his own party doesn’t stand in the way. “This is so precarious that we need the White House to get involved,” says one senior aide associated with the moderate wing of the party.

Biden has begun to take on a bigger role in the negotiations. On Wednesday he met with three separate groups of Democratic lawmakers: Pelosi and Senate Majority Leader Chuck Schumer; a group of 11 moderates that included the two Senate holdouts, West Virginia Senator Joe Manchin and Arizona Senator Kyrsten Sinema; and 10 progressives, including Vermont Senator Bernie Sanders.

After the meetings, some attendees appeared cautiously optimistic, but still didn’t feel a resolution had been reached. “I’m not sure we’re at a place of closing out just yet,” Rep. Stephanie Murphy, a moderate from Florida, told reporters after the call.

Aides for both the moderate and progressive wings say they are frequently in touch with the White House’s legislative affairs office. Brian Deese, the President’s top economic adviser, and Louisa Terrell, head of the Office of Legislative Affairs, met with the moderate New Democrat coalition on Tuesday evening. Cabinet officials like Transportation Secretary Pete Buttigieg and Commerce Secretary Gina Raimondo have briefed both the progressive and moderate wings about various components of the bills. And top Biden advisers, including Susan Rice and Neera Tanden, have also been in touch with outside groups. In the coming weeks, the progressive caucus expects to meet with Marcia Fudge, Secretary for Housing and Urban Development, and Xavier Becerra, who heads the Department of Health and Human Services, according to a source familiar with the plans.

Randi Weingarten, head of the American Federation of Teachers (AFT), who is frequently in touch with the Administration about the bills, described the communication and outreach as “constant.” The Administration, she says, “is completely focused on getting this domestic agenda passed.”

But failing to calm the intra-party tensions could have dire implications for Biden’s agenda. In September, the Senate passed both the infrastructure bill—with bipartisan support—and the budget resolution for $3.5 trillion—which was passed along party lines under a process called reconciliation. Both were sent to the House, but a group of moderate Democrats refused to vote on the resolution until they were guaranteed a vote on the infrastructure bill. Pelosi ultimately reached an agreement with the group to vote for the resolution if the House voted on an infrastructure bill by September 27th. But that deadline is rapidly approaching, and there are stark differences that threaten to derail both votes. Progressives say they will not vote for infrastructure unless there is also a vote on reconciliation, which won’t be ready by the self-imposed September 27th deadline. And they are refusing to vote for anything lower than $3.5 trillion, a price tag that worries some moderates.

The White House says Biden plans to play a leading role in getting the bills over the finish line, and that Wednesday’s meetings were just the start. “He’s going to listen, he’s going to engage, and he’s going to, hopefully, play a constructive role as the leader of the party, as the President of the United States, on moving this important agenda forward,” White House Press Secretary Jen Psaki said on Wednesday. The question is whether that will be enough. 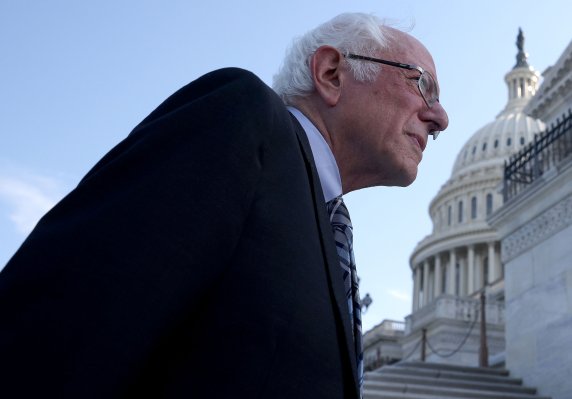 Inside Bernie Sanders' Strategy to Get the Budget Bill Passed
Next Up: Editor's Pick