The 2021 TIME100 list of the world's most influential people featured pioneers like Billie Eilish, titans like Simone Biles and icons like Britney Spears. The TIME100 broadcast special highlighted these figures—and more—Monday, Sept. 21, 2021 on ABC.
TIME
By Chad de Guzman

The 2021 TIME100 list of the world’s most influential people featured pioneers like Billie Eilish, titans like Simone Biles and icons like Britney Spears. The TIME100 broadcast special highlighted these figures—and more—Monday night on ABC.

The primetime TV event featured performances from Eilish and country music star Kane Brown. It also shined a spotlight on Spears’ battle to regain control of her life, and the incredible advances humanity has made in space—thanks in part to SpaceX founder Elon Musk and NASA scientist MiMi Aung.

Here are some of the biggest moments from Monday’s TIME100 special on ABC.

Kate Winslet took on the myth of the ‘perfect’ female celebrity

Kate Winslet, who had just bagged an Emmy Award for her role in Mare of Easttown on Sunday, talked about working to redefine the portrayal of women on screen.

“As an entertainment industry we all have a responsibility to make sure that we are being absolutely authentically true to who we are,” she told TIME. “That we’re not being skinny and conforming. That we’re not changing our faces, that we’re not altering our bodies and achieving some strange idea of perfection that doesn’t exist.”

Winslet’s message to Hollywood: “Be yourself. It’s the easiest thing to remember how to do.”

Biles was already the greatest gymnast of her time, and was expected to add to her four gold medals at the Tokyo Summer Olympics. Instead, she did something bigger; her stunning decision to withdraw from the women’s all-around gymnastics final vaulted mental health into the international conversation.

“For years, I’ve only ever been congratulated for winning. Now it’s like—for being human, for being vulnerable,” Biles told TIME.

The 24-year-old returned to Olympic competition to win a bronze medal on the balance beam. But more than the medals, Biles rejoices in the knowledge that stepping aside was a victory on its own.

“Just putting yourself first, as a human, rather than an athlete, was very powerful. Because most people forget the human aspect of ourselves,” Biles said. “This bronze feels like a gold to me.”

She added: “I feel like I got back up. I had that courage, I fought. And I didn’t care about the outcome.”

Tracee Ellis Ross and Allyson Felix made the TIME100 list for breaking barriers, and then using their power to change the world.

Felix won her 11th Olympic medal in Tokyo, making her the most decorated female track and field athlete of all time. And she did it at age 35 after giving birth in 2018.

“I really wanted to be a representation,” Felix told Ross. “We’re told, ‘You’re done at this age.’ Like, it’s over for you. And to be able to say, ‘My story’s not done, I have more to give.’”

For Ross, it was being the first Black woman to be nominated for an Emmy for lead actress in a primetime comedy series in three decades for her role on Black-ish.

Both came to realize that their prominence allowed them to make things better. “The longer I’m in the industry, I have the courage to use my voice in ways that I didn’t know how to in the beginning,” Ross said. “That I’m inside the rooms in a way that I can say, ‘Huh. I don’t know. I know that’s the way you guys have been doing this forever, but I don’t know if we should just keep doing it that way… I think there’s a lot of people we’re leaving out.’”

Felix used her power to launch her own shoe brand, Saysh—after realizing she was one of the only major track stars not to have an endorsement deal with a major shoe company. “I got to compete in the Olympics in my own brand,” Felix said. “And it was just the ultimate moment of being fulfilled. Here, I was told that my story was done and then I was able to win a gold and bronze medal in these shoes that, you know, my brand created.”

Yang, a featured player on Saturday Night Live, paved the way for a new brand of Asian representation and reclaiming spaces previously rife with stereotypes. “There are these deeply entrenched ideas about what an Asian person should do in front of the camera,” Yang said. “Everything I try to like in life is tainted by this weird mental model of what an Asian person does in film and in television. I feel like I spent a lot of my career playing into those things. Then realizing that, ‘I don’t have to do that.’”

Hannah-Jones, whose work challenges the way Americans think about race and history in the U.S., talked about how important it is not just to break barriers—but to open doors for others, too. “I’ve had really two mantras as an adult, and one of them is that you should be ashamed to be the only one like you in any room that you’re in,” Hannah-Jones said.

The other mantra, she said, is to “be the person I needed when I was trying to make it myself.” 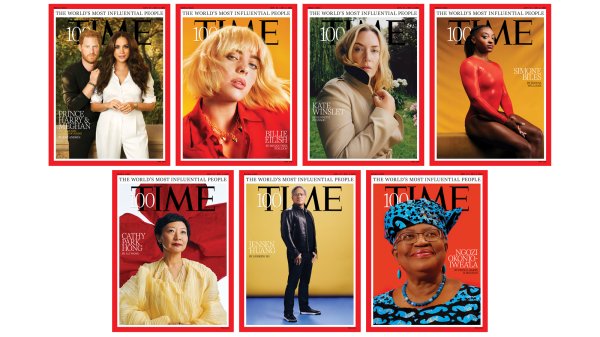