Well hello! I’m so glad you’re here. A version of this article also appeared in the It’s Not Just You newsletter. Sign up to get a new edition every Saturday.

A few weeks ago, I visited the Brooklyn studio of Iranian-born artist, Afruz Amighi. She works with a type of construction site netting which, in her hands, becomes a kind of diaphanous chainmail casting shadows of ancient Persian warriors, or illuminated carpet patterns that tell a contemporary story.

Amighi and her family are part of the Iranian diaspora who left their country after the Islamic revolution in 1979. And she is one of several extraordinary Persian women whose pieces are included in an exhibition opening this month at the Asia Society in New York. I was smitten with their work and wanted to share it because they offer a glimpse of a world beyond our own worries. These women take our worn stereotypes about femininity, religion, and war and nudge them out of context so we can see differently. And that’s the point, of course. It’s a chance to reexamine the seeming realities of our lives, as Saul Bellow might say.

These images are drawn from the collection of Iranian financier and philanthropist Mohammed Afkhami, who is himself part of that diaspora, living between Dubai and London, with some of his family still in Iran. The title of the exhibition, “Rebel, Jester, Mystic, Poet: Contemporary Persians,” is a nod to the voices of these artists who explore gender, politics, spirituality, and war, sometimes with humor, other times with open defiance.

“Many of the most prominent contemporary artists to emerge from Iran have been female,” Afkhami points out. And while he says the Iranian regime’s laws governing women today are “medieval,” Iranian women are a powerful cultural (and political) force, as evidenced by the work in this exhibit which includes women abroad, and those still living in Iran.

Photographer Shadi Ghadirian is one of the artists in the exhibition who lives in Tehran and has never been able to show her work in Iran. Her subjects are post-revolutionary women shown with old-fashioned traditional backdrops and garb but on modern bikes. Or entirely covered, but in the act of being artists, which is in and of itself an act of rebellion. Her other work depicts empty headscarves with everyday household objects in place of faces, like rubber gloves, irons, or brooms. “She’s playful and a bit mocking,” says Afkhami. “It’s kind of saying: ‘I may be covered, but I’m still making my art.'”

Shirin Aliabadi was an Iran-based photographer that transformed our ideas about Iranian youth in a nation where about half of its population is under 35. “Miss Hybrid” 2008 (shown above) is one of the most striking images in this collection. Her portraits of vibrant Iranian women in washed denim, some blowing pink bubblegum bubbles with platinum wigs under their headscarves became iconic. Like Ghadirian’s subjects, they gaze directly at the camera, which feels transgressive, and a bit combative with the little bandages highlighting their nose jobs–a status symbol for a generation that lives in the gravitational pull of Western body-consciousness despite the nation’s economic isolation. (Aliabadi died in 2018 of cancer.)

Others, like Amighi and visual artist Shirin Neshat, live abroad, their hearts and sensibilities existing in a realm between East and West.

Neshat has devoted much of her career to women’s rights and the fight for democracy, both as a photographer and filmmaker. She has spoken frequently about the plight of artists living in exile, longing for loved ones and her homeland while opposing the oppressive regime in Iran. And she points out that she also must confront Western misconceptions about Persian identity, gender, and religion. “Ironically, this situation has empowered all of us [artists] because we are considered as artists central to the cultural, political, social discourse in Iran,” says Neshat, adding:

In Neshat’s untitled photograph (from the Rapture series, 1999) in the Asia Society exhibition, we see dozens of Iranian women covered head to toe in black on a beach, almost like birds. Afkhami describes it as a “powerful image, but also aesthetically interesting, and almost eerily beautiful.” (See Neshat’s TEDTalk.)

Amighi’s shadowy “Angels In Combat” piece from the exhibition, is also at that delicate intersection of beauty and searing commentary. It looks like a traditional Persian carpet pattern but it’s sheer, illuminated, and ghostly. And it tells a modern story. If you look closely at the delicate cutouts, you see angels holding rifles. And there are medical symbols woven throughout that reference health issues that have affected both Iran and the U.S., like the opioid addiction crisis. And perhaps not coincidentally, the work is made from a polyethylene material that the United Nations uses to make refugee tents, “I wanted to introduce violence in an unsuspecting gown. And to create serenity for the viewer without escapism,” says Amighi.

“She’s using her Iranian identity and her Iranian craft to create a modern representation of a social issue in her environment here in the U.S.,” adds Afkhami. And that cross between elevating Persian culture while remaining contemporary and relevant was one of the goals of the exhibition. Amighi says she couldn’t turn off her Persian aesthetic if she wanted to: “At home, there were rugs on the floor, on the walls, practically on the ceiling–all with Persian floral and geometric motifs. This is my natural expression.”

Afkhami hopes this collection will enable people who don’t know much about Persian culture to have an alternative vision of the Iranian people, especially its women. “At the end of the day, governments are transient, cultures are not,” he says. “And Iranian art and culture have lasted more than 3000 years, and that’s something to be proud of, especially in a time where, let’s say, it’s not a shining moment in Iran‘s history.”

As usual, you can write to me at Susanna@Time.com, and visit me on Instagram @susannaSchrobs for more images. If someone forwarded this edition of It’s Not You, consider subscribing here. 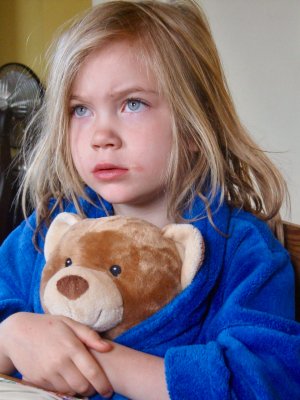 After 9/11: I Wasn't Prepared to Prepare My Kids For This New Reality
Next Up: Editor's Pick