The United States is the only industrialized nation that doesn’t guarantee paid leave of any kind, yet seventy-five percent of U.S. voters support a national paid family and medical leave policy
Getty Images
Ideas
By Melinda French Gates
French Gates is co-chair of the Bill & Melinda Gates Foundation, founder of Pivotal Ventures, and best-selling author of The Moment of Lift.

“This is a once-in-a-generation opportunity,” a member of Congress told me earlier this summer. We were talking about the chance to pass a desperately needed, long overdue national paid family and medical leave law. After decades of groundwork by advocates and activists, this must be the year that the United States finally moves to guarantee paid leave for all workers.

It’s difficult in these divided times to find issues that Americans overwhelmingly agree on, but paid leave is one of them. Seventy-five percent of U.S. voters across party lines support a national paid family and medical leave policy, according to a survey conducted by Invest in America and Data for Progress. That includes 64% of Republicans and 91% of Democrats. In another survey, by the Global Strategy Group, 69% of likely voters across seven battleground states told pollsters they’d even be willing to pay more in taxes in exchange for the protection of a national law.

Read More: These Moms Wanted to Care for Their Kids and Keep Their Jobs. Now They’re Suing After Being Fired

Why has paid leave generated such broad support? Probably because it solves a problem that is as universal as it gets. At some point in our lives, almost everyone who works will need time away from their job to take care of themselves or someone they love. A new baby, an aging parent, a sick family member, a startling diagnosis: these are constants of life. Workers want to know that when the inevitable happens, they’ll be able to stay connected to their jobs and maintain some financial security. At the same time, employers want to support their employees while attracting top talent, reducing turnover and boosting productivity—which is harder in a country that doesn’t help employers provide paid leave.

Unless Congress acts, the United States will maintain the dubious distinction of being the only industrialized nation that doesn’t guarantee paid leave of any kind. As a result, only about one in five private-sector employees has access to any paid family leave through their employer. For the lowest-wage workers—the people who can least afford unpaid time away from work—that number is one in twenty.

Instead of making it possible for U.S. workers to be active parts of their families and the economy at the same time, our country has long operated on the wildly outdated assumption that we all have stay-at-home partners to handle the caregiving. This may be because so many of the people who set policy in this country are in precisely that position. A telling example: in 2019, Congressman Colin Allred became the first member of Congress to publicly take paternity leave in the institution’s 232-year history. Now that most mothers work outside the home—and only about one in four parents has a partner who doesn’t—it’s time to catch up to the fact that our economy is powered by people with caregiving responsibilities.

Read More: Don’t Tell a Caregiver to Stay Positive. Here’s How to Help Instead

Until then, millions of people every year will continue to face impossible choices between protecting their livelihoods and taking care of themselves and their loved ones. And since women bear the lion’s share of those caregiving responsibilities, it’s their careers that tend to suffer first and worst. Even before the pandemic made everything that’s hard about caregiving harder, one of the most frequent reasons women cited for leaving the workforce was “family responsibilities.” This year, as COVID-19 wreaked havoc on schools, daycares and nursing homes, women’s workforce participation hit a 33-year low.

The consequences of forcing our daughters (and sons) into a workplace designed for our dads are staggeringly expensive—and stalling our economic recovery. Before the pandemic began, the lack of paid leave cost American families an estimated total of $22.5 billion in lost wages every year. And today, in a moment when employers are scrambling to fill open jobs, 37% of unemployed workers say access to paid family leave would make them more likely to return to work sooner.

Read More: After a Terrible Year for Women in the Economy, These Places Are Working Toward a Feminist Recovery From COVID-19

A national paid leave law would also help level the playing field for small businesses. Until they get the support they need, these businesses will keep losing talent to larger companies with deeper pockets while also struggling to absorb the cost of replacing employees forced out of the workforce by caregiving needs. Molly Moon Neitzel, who owns an ice cream company near my home in Seattle, testified before Congress this spring about how hard she’s worked to keep valued employees as they struggled with challenges like remote schooling and daycare closures. Neitzel spoke for many business owners in her position when she insisted, “With the ongoing pandemic and Main Street still on the path to recovery, paid leave is not an ‘extra.’ It’s an essential must-have.”

What the second year of the pandemic brings for businesses like Neitzel’s is hard to predict. But here’s what we know for sure: Babies will be born, aging parents will fall, children and spouses will get sick, and some of us will find ourselves recovering at home from an illness or injury. The question is not whether U.S. workers will need time away from work—it’s whether this is the year Congress will ensure that paid leave is available when they do. 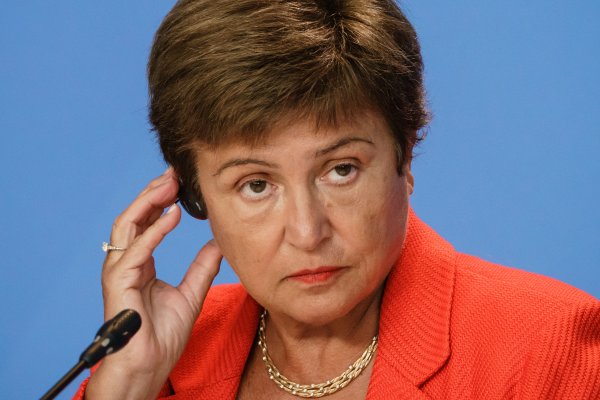 IMF Managing Director Called Out on 'Pressure' to Boost China's Ranking in Economic Report
Next Up: Editor's Pick