Making Meals From Mealworms Is 'Part of the Answer' to the Climate Crisis, the CEO of Ynsect Says

Global food production accounts for one-third of all greenhouse-gas emissions, according to a comprehensive study published this year in the journal Nature Food that looked at every aspect of food production from transportation to packaging. Meat production alone makes up nearly 60% of that total.

The study underscores the growing consensus that in order to stave off the worst impacts of climate change, the world needs a dramatic rethinking of how food is produced and consumed. Especially since the U.N. estimates that food production will have to increase by 70% by 2050 to feed the world’s growing population.

Increasingly, companies and scientists are viewing insects as an environmentally sustainable alternative source of protein. Crickets, grasshoppers and beetles are already commercially produced and processed for human and animal consumption. Ynsect, a 10-year-old French company, is focused on mealworms, the larval stage of beetles.

One big advantage of mealworms, aside from their neutral taste and high degree of digestibility, is that they don’t fly or jump, which means it requires a lot less space to grow and process them compared with more mobile insects. One of Europe’s best-funded insect-farming companies (it has raised over $400 million), Ynsect currently has one highly automated vertical farm in France and plans to open a far larger production facility in the country next year. The company is also scouting locations for a major facility in the U.S. and plans to announce a Midwest location before the end of the year. It eventually plans to have farms across the world.

Ynsect’s powdered protein is currently used in pet food, fish meal for commercial fish farms and other animal feed. It’s in limited consumer products in parts of Europe, including as an ingredient in burger patties and pasta. It will soon enter the sports-drink and protein-bar markets.

Ynsect co-founder and CEO Antoine Hubert recently joined TIME for a video conversation on how the cultivation of insects can help mitigate the impacts of climate change and take pressure off threats to the earth’s biodiversity.

Was it always the humble mealworm?

When we started the company, we tested several species, from beetles to flies to crickets, locusts and others. Finally, we ended up with mealworms.

We worked with a small farmer who had 20 years experience in small-scale insect farming, and it was his opinion that it was the best. We also found that mealworms were super-good for great big vertical farms and able to deliver large volumes that are required for animal feed, pet food or human food—thousands of tons, not a few kilos per day.

So scalability was a big factor in anointing mealworms?

Exactly. This is about a product and the technology. It is not flying. Butterflies or crickets, they need a lot of space to grow. Mealworms really love to be together.

What does the insect version of a vertical farm look like?

It’s an automated warehouse, very similar to an Amazon warehouse, where instead of storing stuff, we are storing live insects. There is a climate-control system which is highly complex to maintain temperature and moisture from zero to 30 meters high. All operations are automated. Anything that you do on [an insect] farm is done with robots.

Why is developing an alternative protein source with a smaller carbon footprint so essential, and what role is your company playing across the food chain?

The two main issues the earth is facing today are climate change and biodiversity collapse. We are not far from reaching tipping points where then things get worse and it cascades and waterfalls—you can’t stop it anymore. Time is very critical.

There is a huge need to reduce our consumption of beef. We should keep beef consumption, grazing, on a smaller scale with high levels of fresh products. But everything that is a processed meat should be 100% replaced at some point by alternatives. Insects will be a part of the answer.

Another way is to move from existing meat to other meats with no methane emissions: chicken and fish. We help to change the way we feed chicken and fish. And our leftover insect manure is a great organic fertilizer that can fully replace chemical fertilizers.

How is fish-meal production, catching fish to be ground up into fish meal to feed farmed fish, harming biodiversity?

It’s about overfishing. The largest fisheries today are used for fish-meal production. One in four boats, about 25% of total fish vessels, are used to process fish meal which is going to feed animals. It’s the most overfished stock. We need to reduce the fishing of the stock to be below the renewable threshold.

They say in the fishing industry, take only the interest, not your stock. The demand for fish, especially shrimp and salmon, is growing a lot faster than other meats, and they are super-dependent on fish meal. And this is why big companies are looking for alternatives.

And mealworms have a fairly neutral taste?

We have different products, but the main one is pretty neutral. We also have a very light color, which is exactly what companies are looking at.

They don’t want a very strong taste when they do burgers or energy bars or energy drinks. Otherwise you will end up with a highly smelly product, which is something that is not desirable for consumers, which is often what small-scale crickets companies are doing … big smell and big taste, which makes it very difficult to use the product in final food products. Our process helps us to avoid smells.

Note to readers: I want to end this week’s column with a note of thanks to the readers of The Leadership Brief. Starting next week, we at TIME are embarking on a new approach that we are excited to share with you. I will continue to contribute, but going forward, the weekly newsletter will be produced by a team led by TIME’s executive editor, John Simons (John conducted the interview with Apple CEO Tim Cook last week).

I want to thank all of you for your loyal readership and offer a particular expression of gratitude to those of you who have taken the time to write and share your thoughts with me. I have loved hearing from you each week and have always benefited from your insights. 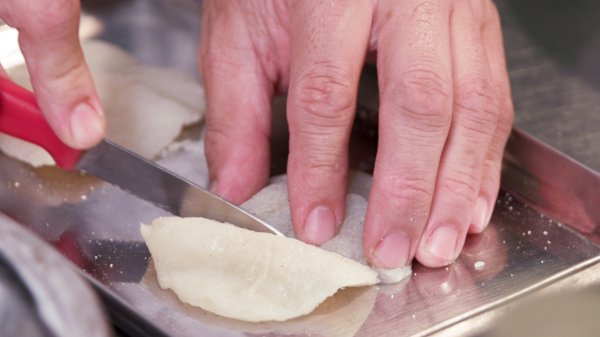 I Tried Lab-Grown Fish Maw. Here's Why It Could Help Save Our Oceans
Next Up: Editor's Pick