Norway's 'Climate Election' Showed Voters Want Change. But Are They Ready to Give Up Oil?

Labor leader Jonas Gahr Store answers questions from reporters outside his home, the day after the parliamentary election in Oslo, on Sept. 14, 2021.
Terje Bendiksby—NTB/AFP/Getty Images
By Eloise Barry

Norwegian voters delivered a clear result when they went to the polls Monday in what has been dubbed the “climate election.” Prime Minister Erna Solberg’s right-wing coalition government will be out of power after eight years, and the climate crisis is firmly on the agenda.

Jonas Gahr Støre’s center-left Labor Party came away with 48 of 169 seats, meaning he will likely be leading the next government. Støre celebrated what he called voters’ desire for “change.” But, it’s less clear exactly what form that change will take for western Europe’s largest oil and gas producer.

Støre now faces complex discussions with other left-leaning parties to form a coalition government. Climate policy is set to be a major point of contention between Labor’s preferred coalition partners. While the Socialist Left have campaigned to end further oil exploration, the more free-market Center Party wants to uphold the status quo.

Breaking up with oil and gas was always going to be difficult for the owner of the world’s largest sovereign wealth fund—valued at $1.4 trillion. North Sea oil and gas, which accounts for 14% of Norway’s GDP, 40% of exports, and employs 7% of its workforce, has made the country one of the richest in the world, by GDP per capita.

Yet, Norwegians also pride themselves on being environmentally conscious. How they choose to deal with this contradiction—and balance the needs for economic recovery amid the COVID-19 pandemic—will offer clues about whether European voters are willing to make the hard choices on climate change.

“Oil and gas have always been the elephant in the room,” Fay Farstad, senior research fellow at CICERO Center for International Climate Research, a Norwegian climate research center, says. “This level of public debate on oil and gas in Norway is new in itself.”

The release on Aug. 9 of the 2021 U.N. Intergovernmental Panel on Climate Change report, which predicted “unprecedented” and “irreversible” changes to the planet as a result of human activity, forced Norwegian voters to confront the consequences of their multi-billion-dollar industry.

In the month leading up to the September election, climate dominated the agenda on televised debates and national news. Along with inequality, the climate crisis was one of the top two priorities for voters, according to a poll by Aftenposten, Norway’s largest print newspaper. Shortly after the publication of the IPCC report, the anti-oil Green Party experienced a membership increase of nearly one-third.

“What’s interesting is that that hasn’t automatically translated into a massive increase [in vote share] for the Greens,” Farstad says. Exit polls show the Greens won three seats, up from one in the previous election.

“But precisely because it’s been high on the agenda, a lot of parties have been competing on the issue of climate change and they’ve been taking it seriously,” he adds. “Climate change voters have spread out more, not just voting for the Green Party or Socialist Left Party.”

A survey by Ipsos MORI into public perception of climate change, which conducted 1,000 interviews in four major European countries, found that climate change is not seen as a left-right issue in Norway, unlike in countries such as the U.S. and Australia.

The issue is less whether voters care enough about climate change, but more the effect of winding down oil production on quality of life, Farstad says.

“Inequality, and the urban-rural divide, are very bound up in the climate change question,” she says. “Stricter climate change measures could disproportionately hit poorer families, particularly people in rural areas who are more dependent on employment in the fossil fuel industry.”

According to the Norwegian government​​, the proportion of Norwegian children living in low-income households grew from 3.3% in 2001 to 11.7% in 2019. Salaries have failed to increase at the rate of house prices, which have risen sixfold in 30 years.

Støre carried Labor to victory campaigning on tax increases for the wealthiest Norwegians and tax relief for low and middle income families.

A 2021 survey of 30,000 people in Europe, the U.S. and China by the European Investment Bank found that European respondents believed COVID-19 has surpassed climate change as the biggest threat to their countries.

Yet, climate remains a pressing issue. At the U.N. COP26 conference in November this year, countries will be expected to strengthen their commitment to the 2015 Paris Climate Agreement, which aims to keep the rise in mean global temperature below 2°C.

Other European countries are facing a political reckoning with the climate crisis. On Sept. 26, Germany will choose a new government. The Green Party, which put forward its first ever candidate for chancellor, is expected to jump from the sixth to third largest party in the Bundestag, Germany’s federal legislature. While the Greens are not expected to win, their rise in popularity is a sign of a shift in climate discourse similar to that seen in Norway.

Experts say Norway has a complicated relationship with the environment. The Ipsos survey found that Norwegians value their image of their country as nature-oriented and sustainable—57% of the respondents agreed that being environmentally friendly is an important part of being Norwegian. A leader in green energy, 98% of electricity production in the country comes from renewable energy sources.

Yet, while Norway produces close to zero emissions from power production, it is responsible for high emissions from oil and gas extraction in the North Sea. Of course, those fossil fuels also produce enormous emissions when they are used by other countries—Norway is the third largest exporter of natural gases in the world, behind Russia and Qatar. The Ipsos survey describes Norwegians’ simultaneous support for the fossil fuel and renewable energy industries as “cognitive dissonance.”

In Norway’s case, it could be the smaller, more radical parties that may influence the new government’s climate strategy. The communist Red party with eight seats, up from one, and the Greens with three, could offer major support to the Labor party in an extended coalition government.

“They’ll be breathing down the Socialist Left Party’s neck and pushing them hard [on climate],” Farstad said.

The campaign group Greenpeace Norway is hopeful the election will yield positive results for the country’s climate change policy. “Of course, we would have hoped for an even greener parliament,” Frode Pleym, head of Greenpeace Norway, told TIME. “The Labor Party and the center party by and large want to continue business as usual, so it depends how powerful the Socialist Left pocket in the coalition will become.”

A 2020 U.N. Human Rights Council report on Norway said there was no room for further oil exploration and called for a complete overhaul of the emission-producing fossil fuel industry.

“The stage is now set for Norway to take further steps to cut emissions, these steps have so far been too small, too few and consistently too late,” Pleym said. “As a major oil producing nation, Norway has a great responsibility to the world.” 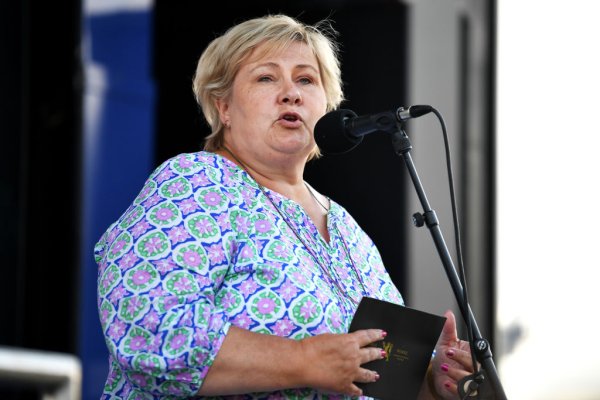 Norway's Fossil Fuel Reliance Is Going to the Ballot Box
Next Up: Editor's Pick