Norm Macdonald was responsible for some of the worst punchlines in Hollywood history.

“There are times when Bob has something on his mind—when he wears a hat!” the comedian proclaimed stone-faced at Comedy Central’s Roast of Bob Saget in 2008, as Saget, his target, chuckled with clear confusion and discomfort. As the room grew quiet, unmoved by the joke, Macdonald decided not to move past the clear dud, but instead to double down: “No thoughts at all—JUST A HAT!”

But it was exactly this type of delivery and commitment that made Macdonald, who died on Tuesday after a long, private battle with cancer, one of the most unique and irreplaceable voices in modern comedy. Macdonald thrived on the edge of convention and in moments of silence and discomfort; through his unique approach, he weaved the dumbest punchlines into comedic masterclasses. And while other comics turned their desire to provoke into an excuse to bully or punch down, Macdonald’s transgressions were usually more conceptual: he thumbed his nose at the art form of the joke itself.

From “Weekend Update” to icon status

Norm Macdonald joined Saturday Night Live in 1993—his Burt Reynolds impression on the recurring Celebrity Jeopardy sketches was unforgettable—and later became the anchorman of “Weekend Update,” developing a reputation as a sardonic livewire liable to veer dangerously off script. (At the ESPYs in 1998, his joke about O.J. Simpson left its target, Charles Woodson, shaking his head in disgust as if he had been tackled on the football field.) Though he would lend his voice to or make cameos in many movies throughout his career, the one he co-wrote and starred in, 1998’s Dirty Work directed by Saget, bombed. He was fired from SNL that same year, allegedly due to his repeated jokes about O.J. Simpson, who was friends with an NBC executive.

But somehow, his failures led to much greater success. “I got demoted at SNL, and then I got sort of hot,” Macdonald told Rolling Stone in 1999. “Then the movie didn’t happen, and then I got really hot.”

After that point, Macdonald became one of the most respected and beloved comics to younger generations, primarily through stand-up sets and late-night appearances. There are unspoken rules for comedians appearing on late night shows: be succinct and amiable, play nice with the other guests, plug your movie, keep it moving. One of Macdonald’s comedic inheritors, the fellow Canadian Nathan Fielder, recently skewered those conventions on an episode of Nathan For You.

But Macdonald was working in that space first, gleefully undermining hosts at every turn and egging on confrontation, a mischievous smile preceding every provocation. “In all sincerity, I know you don’t like to hear these things and emotions—you’re like Nixon,” he said straight to David Letterman’s face. At a daytime appearance with the Lonely Island, he said to the trio, with a glint in his eye: “I call them [Andy] Samberg and the other couple of fellas.”

His most frequent sparring partner was Conan O’Brien. Over more than two decades, Macdonald came on O’Brien’s show regularly to tell story after incoherent story, to O’Brien’s mock chagrin (and underlying delight). In 1997, he completely derailed a now-infamous interview with Melrose Place star Courtney Thorne-Smith, mocking her career trajectory and her new movie Chairman of the Board: “I bet the ‘Board’ is spelled ‘B-O-R-E-D,’” he exclaimed, causing Thorne-Smith to cover her face and O’Brien to jump out of his chair.

A singular style encapsulated by one cheesy joke

One of the most famous, and funniest segments Macdonald ever had on O’Brien’s show came in 2009. Over four bumbling minutes, Macdonald weaves a story, now referred to as “the moth joke,” about a depressed Russian moth at a podiatrist’s office, delivering each increasingly dark line with a mixture of eloquence and awkward, halting cadences; he steamrolls unperturbed over every one of O’Brien’s interjections. When he finally arrives at the punchline, it is as obvious and juvenile as can be—but his ability to build tension, to keep the audience wrapped around his finger, to place himself deeply within his own absurdist story, and his exultant delivery of a punchline he himself knew was cheesy all contributed toward making the joke an all-timer.

Macdonald was a man of his time; he made plenty of racially-based and gender-based jokes that would be considered offensive by today’s standards. Off-color comments he made in 2018 while promoting his new show made it clear that he was out-of-step with the current comedic moment. But his impact on the next generation is immeasurable. Colin Jost has said he modeled his “Weekend Update” persona after Macdonald’s; Seth Rogen also said he “ripped off his delivery” at the start of his career.

It’s easy for comedians to try to be scandalous and undermine conventions—but much harder to make such unfunny material so hilarious. After a particularly groan-inducing punchline on Conan in 2014, Andy Richter scolded him: “It’s like somebody saying, ‘I gotta show you something,’ and then they take you on a four mile hike to show you a dog turd.” But the overflowing laughter of the trio told a different story. Many have tried to replicate his cringey success—but there will never be another Norm Macdonald.

Correction, Sept 15. The original version of this story misstated the year in which Norm Macdonald told “the moth joke” on Conan O’Brien’s late night show. It was 2009, not 2017. 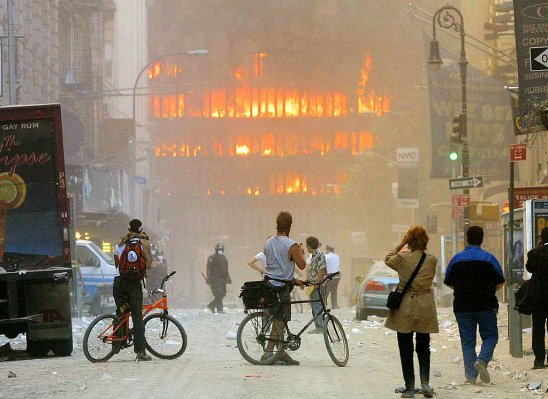 What It Was Like to Be Near Ground Zero on 9/11
Next Up: Editor's Pick