I have been working as an actor for many years. But never before in my work—at least not until April 2021, when I was filming the seventh episode of Reservation Dogs—have I had an out-of-body experience or cried out involuntarily. This time, my body took over. I was shaking, adrenaline coursing through my body as all my nightmares of losing loved ones were unearthed to haunt me anew.

The reason for my visceral reaction: never in my career as an actor, or in my experience as a viewer of TV and film, have I experienced a work of popular culture that addresses suicide among Indigenous peoples with the care and directness that Reservation Dogs does.

Suicide has affected every Indigenous community on Turtle Island and countless Native families. According to the Centers for Disease Control, Native American people have the highest rates of suicide of any racial/ethnic group in the United States. And in Canada, First Nations people living on and off reserve, Métis and Inuit, die by suicide at a higher rate than non-Indigenous people—in some cases, upwards of 33 times higher.

But these statistics are not just numbers to us; they represent our real friends and family members, each one with an entire community struggling alongside them, and grieving for them, after they’ve departed. We may hear these numbers in mainstream news reporting , but we rarely encounter the lives of our Indigenous kin who died by suicide. We rarely witness the aftermath, the friends they’ve left behind. And that is exactly what is explored in the heartbreaking and heartwarming seventh episode of Reservation Dogs, a show that I have the privilege to be a part of, playing the character Elora Danan.

The series, created by Sterlin Harjo and Taika Waititi, takes place on a reservation in Oklahoma where Elora and her three closest friends live. Throughout the episodes, these friends continually reminisce about the fifth member of their group and best friend Daniel, who tragically passed away one year earlier. In episode seven, titled “California Dreamin’,” we finally learn what happened to him: he died by suicide, and it was Elora who found him.

This topic isn’t merely a storyline. It’s one of the first times Indigenous people have had an opportunity to collectively mourn and heal in a mainstream production. Everyone behind Reservation Dogs, all of the key creatives and cast members, have deeply personal elements of ourselves baked into this episode—and I am no exception.

Suicide is something that’s plagued my own rez and crept far too close to my family. Countless cousins and community members have been lost to it, leaving our families in shambles. Growing up, I nearly lost someone I love profoundly. Words fail to describe the despair and anguish of having a suicidal loved one. I thank creator every day that I still have those closest to me around. But not all of our kin have been so fortunate. Daniel as a character was inspired by a real person, and in filming this episode, he was treated as such.

Our incredible showrunner Sterlin Harjo shared his heart with us, and the story of his family, trusting us with this episode. And Tazbah Chavez, the gifted writer and first-time television director, infused the story with her upbringing and experiences while painstakingly crafting this piece.

From left to right, D’Pharaoh Woon-a-tai, Paulina Alexis and Devery Jacobs in a behind-the-scenes photo from the filming of 'Reservation Dogs'
Charles E. Elmore

Filming this episode of Reservation Dogs challenged me like no other role has. Tazbah worked intimately with me and Dalton Cramer, who plays Daniel beautifully in heartbreaking flashbacks. In preparation for the scene in which Elora finds Daniel’s body, Tazbah explained to me exactly how we would shoot it. Creatives behind Rez Dogs pulled inspiration from, and made a nod to, our executive producer Taika’s film, Jojo Rabbit, where Jojo finds his mother’s body, and the audience pieces together her identity by the shoes on her feet.

Ensuring that we didn’t capture graphic imagery was paramount—for communities that have experienced so much trauma, it’s crucial to avoid triggering or re-traumatizing viewers, as we endeavor to depict the issue with humanity and empathy. Tazbah walked me through the mechanics, where Dalton was rigged up on a crane lift system—but I made the decision not to enter the space or to look at him propped up on the rig before she called “action.” I wanted to have my initial reaction captured on film, and that first reaction was what made it into the episode.

I only noticed afterward that my inner forearms were scraped and bruised from trying to lift Dalton’s legs with all my strength. I’m by no means a method actor, but filming that scene felt frighteningly real for me that day.

I was left breathless, but I finished the scene only to be met by a huge support system on set. The production lowered Dalton down between each take, and he embraced me. I desperately needed that time to hold him, to physically feel that he was O.K. We also had a Muskogee elder, Wotko, hold an opening and closing ceremony on set for all cast and crew, to ensure we created a space to reach the depths we needed to, and that we didn’t carry those feelings with us long after wrap. We filmed this poignant scene enveloped by sage smoke and community.

Members involved in the production of 'Reservation Dogs' embrace on set.
Ryan Redcorn

Daniel is more than just a character in a fictional story. To us, he is real, and he is continually made real through our stories and the longing for our loved ones. This episode was steeped in each of our experiences, and we all came together to treat this subject matter, this story, and this reality for so many Indigenous people with the utmost care and respect.

Reservation Dogs is, first and foremost, a comedy series; our people have used humor as a coping mechanism and means of survival since 1492. But my greatest hope for “California Dreamin’,” and for this entire series, is that it can open doors for conversations between Indigenous families and communities around how we can support our struggling loved ones, remember those we’ve lost, and collectively heal as we look toward the future.

Devery Jacobs was born in Kahnawà:ke Mohawk territory and is an award-winning actor and filmmaker. Jacobs is mainly known for her performances in Rhymes for Young Ghouls (2013), Neil Gaiman’s American Gods (2019-20) and her leading role in Taika Waititi’s hit FX series Reservation Dogs (2021). 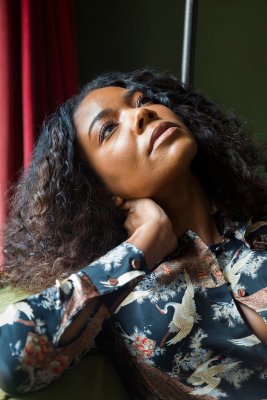