The One Story That Captures the Immigrant Experience Like No Other

Refugees walk through the departure terminal to a bus at Dulles International Airport after being evacuated from Kabul following the Taliban takeover of Afghanistan on August 31, 2021 in Dulles, Virginia.
Anna Moneymaker-Getty Images
Ideas
By Suketu Mehta
Suketu Mehta is the author of This Land is Our Land: An Immigrant's Manifesto, and of Maximum City: Bombay Lost and Found, which was a finalist for the Pulitzer Prize. He was born in Calcutta and lives in New York City, where he is an associate professor of journalism at New York University.

Sometimes the best take on current affairs is found not in the punditry of the cable shows but in great literature. Watching the horrific scenes in Kabul—the anguish of parents handing their babies to soldiers, the bodies falling from planes—made me reach for something deeper, more profound, that could help me understand the human dimensions. So I re-read ‘Kabuliwallah’, a story written by the Indian Nobel Laureate Rabindranath Tagore in 1892. It’s became a phenomenon in India: it’s a part of school syllabi all across the country, has been made into numerous films in multiple Indian languages, and still shapes popular Indian attitudes towards Afghans. It makes me cry every single time I read it. It is one of the greatest stories about the migrant experience every written, and it deserves a global audience outside India—particularly now. And, come to think of it, it deserves to be re-read in India now, which is experiencing a government-led upsurge of fear and hatred of Afghan Muslim refugees.

The most harrowing image from the evacuation of Kabul was the hundreds of people clinging to the giant U.S. Air Force plane as it takes off. At least two of them held on until the plane took off, and fell from it—two tiny black dots crudely circled in red in a Twitter post. What desperation made them cling to a plane taking off into the sky? What do they dream of, who do they love? ‘Kabuliwallah’ provides some of the answers—and also raises other questions, about the complex attitudes of hosts to migrants.

‘Kabuliwallah’ is a story, not about a political refugee, but about someone who has to leave his troubled land to find work and to support his family. On a planet on the move, whether you’re slotted as a refugee, migrant, expatriate, or tourist, can mean, literally, the difference between life and death. Etymology is destiny.

There are no perfect English translations of the story, but read this version first if you’d rather not know the plot. (The story is on p. 113 of this collection, which can be downloaded on Kindle.) Here’s another translation, available online. Last year, the Hindustan Times newspaper and Juggernaut Books organized a readathon of the story featuring 18 of India’s top celebrities.

The story begins with gentle comedy: the narrator, a writer, keeps being disturbed in his study by the prattle of his five-year-old daughter, Mini. Down the lane comes a ‘Kabuliwallah’—Rahamat, an Afghan peddling dry fruits and nuts, a seasonal migrant common all over India when such a thing was possible, coming to sell his wares from the mountains to the dusty plains of British India. Mini finds him the one person willing to give her his undivided attention, and they become friends. He tells her jokes, makes elephant imitations, brings her treats. What does this giant Afghan see in this little girl?

The writer and Rahamat discussed the 19th-century political situation in Afghanistan. “We talked about Abdur Rahman’s efforts to preserve the integrity of Afghanistan against the Russians and the British.”

Around the time the story was written, these two superpowers were busy playing ‘The Great Game’, creating Afghanistan as a buffer between their empires. The Durrand Line, established in 1893—one year after Tagore’s story came out—was a one-page piece of paper that still lies like a giant dagger severing the tribal Pashtun homeland. Then, as now, Afghans were forced to flee or seek work outside their country due to the machinations of great powers.

But Mini’s mother is suspicious of the foreigner, and her fears are reflected in today’s Republican talking points against admitting Afghan refugees: they steal, they kidnap small children. They could be terrorists. They’re untrustworthy.

“If I tried to laugh off her suspicions, she would launch into a succession of questions: ‘So do people’s children never go missing? And is there no slavery in Afghanistan? Is it completely impossible for a huge Afghan to kidnap a little child?’”

Rahamat is not the “perfect refugee.” In a fight with an Indian customer who tries to lie his way out of paying for a shawl he’s bought—a common experience for migrant workers who find themselves cheated out of wages by native employers—he stabs the customer, and is thrown into jail. The family forgets all about their Afghan friend, including the adorable little girl; she could be America after we’ve had our playtime with Afghanistan: “As for the fickle Mini, even her father would have to admit that her behavior was not very praiseworthy. She swiftly forgot her old friend.”

The father, too, has complex attitudes towards the fruit-peddler. He’s never been outside of Calcutta, and lives vicariously through Rahamat, daydreaming of caravans slowly making their way through high mountain passes. But he, too, fears the Afghan: the violence and chaos of his homeland that he might bring into his safe Calcutta existence.

Rahamat reappears at the house eight years later, freshly released from jail, on a day which happens to be Mini’s wedding day. He wants to see her. But her father is afraid of the ex-con, and tells him to leave the house. Rahamat has a gift for Mini: a box of grapes, nuts and raisins. The writer takes the box, and is about to pay him, and Rahamat holds his hand. “Please, don’t give me any money—I shall always be grateful, Babu. Just as you have a daughter, so do I have one, in my own country. It is with her in mind that I came with a few raisins for your daughter: I didn’t come to trade with you.”

“Then he put a hand inside his big loose shirt and took out from somewhere close to his heart a crumpled sheet of paper. Unfolding it very carefully, he spread it out on my table. There was a small handprint on the paper; not a photograph, not a painting—the hand had been rubbed with some soot and pressed down on to the paper. Every year Rahamat carried this memento of his daughter in his breast-pocket when he came to sell raisins in Calcutta’s streets: as if the touch of that soft, small, childish hand brought solace to his huge, homesick breast. My eyes swam at the sight of it. I forgot then that he was an Afghan raisin-seller and I was a Bengali babu. I understood then that he was as I am, that he was a father just as I am a father.”

I would urge every American or European or Indian fearful of the coming Afghan refugee horde to read Tagore’s story. It might confirm your fears—the refugee could, like Rahamat, be violent in the defense of his rights (even though immigrants commit crimes at far lower rates than the native born). But it might also ease them. Because in the end, what changes hearts isn’t statistics about crime rates, or even a news story; it is empathy, which is the province of literature.

Mini has become Rahamat’s replacement daughter. And this too rings true: immigrants, far from their own children, often take care of other people’s children, and love them as their own, as any immigrant nanny will tell you. Alone in the strange land, the parental impulse needs more of an outlet than ever.

I, too, am a parent, of two grown sons, and they are not the same as when they were children. The story of parenthood is one of continuous loss: when you stop being the center of your child’s world and “she even stopped coming to her father’s study”, when she goes to school for the first time, when she’s more interested in spending Saturday nights with her friends than with you; when she leaves home altogether for college, to get married. But most of us experience this loss in stages, over years. The refugee parent fleeing from the tyrant regime loses family all at once, in the space of a five-hour flight to Qatar. He might be forced to leave his children behind—or choose which of them to take with him and which to leave behind. He experiences an exponential version of the loss that all of us feel when our kids go to college or get married and move away.

Part of the reason the Biden Administration didn’t move quicker on evacuating the Afghans who’d risked their lives to help us during the war was fear of a political backlash at home. The Indian government has, if anything, an even worse record. It was very happy to send advisors and aid to friendly Afghan regimes after the Taliban fell—as part of the new Great Game it’s playing with Pakistan. The Hindu-nationalist BJP government did evacuate Hindu and Sikh Afghans, but reportedly was less enthusiastic about Muslims. Tagore, a firm believer in religious plurality, and writer of both the Indian and Bangladeshi national anthems, would be ashamed.

The parts of the world where people meet immigrants face to face every day—like London, like New York—are also the most open to them. Conversely, the places where migrants are seen as thieves, child-nappers, are also the places with least personal experience of them. You meet the feared Afghan or Salvadoran or Vietnamese refugee, and witness his devotion to family. And you realize, “he is a father just like I am a father.” Literature, in the great humanist tradition of ‘Kabuliwallah’, can be as powerful as a personal interaction.

I have met these Kabuliwallahs in many countries: selling fruit in Calcutta, where I was born; driving taxis in Berlin; cooking kebabs in Queens. And now the global Afghan diaspora is due to increase dramatically—and the countries where they settle will be the better for it. We need to see the people climbing on to the moving planes as more than dots in the sky. They are full and complete human beings, each one of them capable of love and loss, carrying the handprint or photo or locket of their child, their mother, their wife, close, so close, to their hearts. 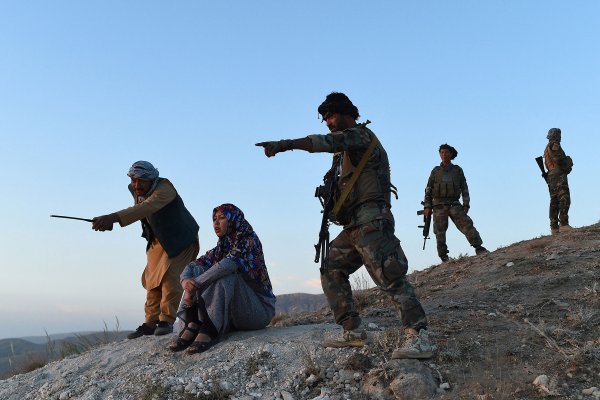 Exclusive: Afghan Governor's Narrow Escape From the Taliban
Next Up: Editor's Pick