The year I started in journalism, 1992, was “the end of history” or so claimed a famous book by that title with a remarkably sunny view of human progress. Today—as I near my 30th year in this business, and as the many crises of 2020 hurtle toward 2022—it’s clear that we are still very much living history. But I find reason for optimism, as I hope you will, in our 18th annual TIME100 list of the world’s most influential people. It features extraordinary leaders from around the world working to build a better future, from entertainers striving to make Hollywood more inclusive to activists fighting for sustainability and human rights.

“Springing into action is not the easy choice,” chef and humanitarian José Andrés, a two-time TIME100 honoree, writes in his tribute to Prince Harry and Meghan, The Duke and Duchess of Sussex. Their actions this year not only prompted deep re-appraisals of British society and the monarchy’s place within it, but have also catalyzed essential conversations on topics from mental health to misinformation. Our cover portrait, taken by Pari Dukovic, marks the first time the world-famous couple has formally posed together for a magazine cover shoot. “It captures their powerful dynamic as equal partners,” says Dilys Ng, who has photo-edited our TIME100 covers for the past four years.

This instinct to “run toward the struggle,” as Andrés puts it, is characteristic of nearly everyone on this year’s list, though of course results may vary depending on whom you ask. They are disrupters, fixers, doers, iconoclasts, problem solvers—people who in a year of crisis have leaped into the fray. And nowhere more so than in the realm of science, where advances in vaccines have put a deadly pandemic on defense, even as millions continue to aid and abet the virus by refusing them and as the global community struggles to distribute them as broadly and as desperately needed. As biochemist and Nobel laureate Jennifer Doudna writes, all of us who received the Pfizer-BioNTech or Moderna vaccines owe an enormous debt to Hungarian scientist Katalin Kariko, who spent decades defying skeptics in dogged pursuit of mRNA as a tool to fight disease.

Science won another crucial victory in the climate arena. The work of European scientists Friederike Otto and Geert Jan van Oldenborgh has made it possible for the first time to determine almost immediately the role that global warming plays in extreme weather—meaning, as environmentalist Bill McKibben puts it, that “people reading about our accelerating string of disasters increasingly get the most important information of all: it’s coming from us.” Otto and van Oldenborgh are among a record number of climate leaders on the list, more than 10 in all. These include environmental activist Phyllis Omido, whose work made possible a landmark settlement for lead-poisoning victims in Kenya, and General Motors CEO Mary Barra, who this year announced the company would phase out gas-powered cars by 2035.

For the second year in a row, TIME journalists assembled this project working apart, across time zones and continents. It was overseen for the fifth year by Dan Macsai, editorial director of the TIME100, working with Ng, as well as Jennifer Duggan, Merrill Fabry, Lucy Feldman, Cate Matthews, Nadia Suleman and designer Katie Kalupson. Though COVID-19 prevented us from hosting our annual gala (back next year!), we are bringing the list to life once again through a TIME100 TV special (Monday, Sept. 20, at 10 p.m. E.T. on ABC).

At TIME, we see the TIME100 as far more than a list. It is a community of leaders whose energy and commitment we hope inspires others to spring into action as well.

In her TIME100 tribute to business leaders Kenneth C. Frazier and Kenneth I. Chenault, who are working to galvanize corporate America to oppose restrictions on voting rights, former Xerox CEO Ursula Burns writes that when the pair call, people pick up, knowing they might get “to stand on the shoulders of giants and help create a better world for future generations.”

This year, we are all receiving that call. We all have an opportunity to help create a better world. And we can choose to be among those who pick up the phone and—in the words of José Andrés—run toward the struggle. 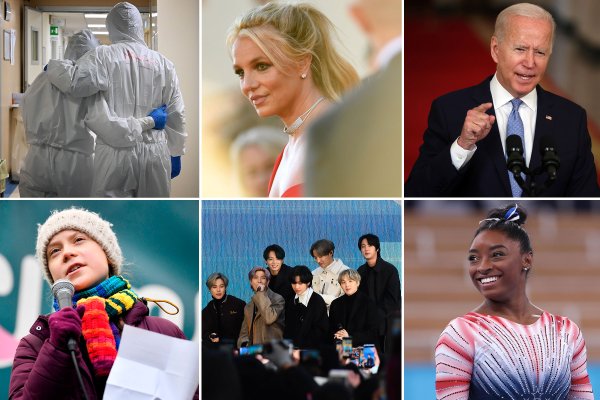